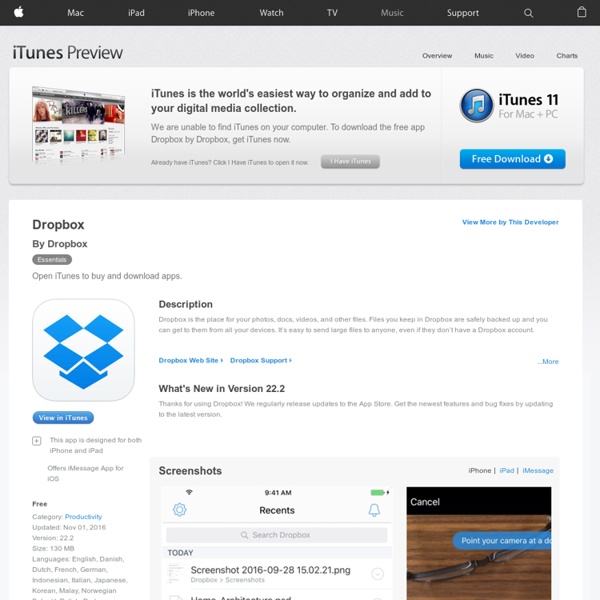 Description Dropbox lets you bring all your photos, docs, and videos anywhere and share them easily. Access any file you save to your Dropbox from all your computers, iPhone, iPad, and the web. With Dropbox you’ll always have your important memories and work with you. Features:• Access all your photos, docs, and videos from any device.• 2 GB of space when you sign up — free!• Share a link to even your biggest files — no more attachments! Use Dropbox to save and share photos, docs, and videos in a snap. Terms of Service: ...More Customer Reviews by ZenLizard As a graphic designer, recording artist, and mixing engineer, I need this app (and the DropBox service) on a daily basis. Flawless operation - ZERO problems. Great app for the most part by Liz iPhone user Very functional, easy to use, makes sharing large files easy, love this app except for...you have to double delete for a file to not take up some of your space. Really good and getting better all the time by sgej

Building a Celtic Roundhouse The walls of roundhouses were either dry stone filled in with clay and straw, or a ring of support poles weaved with wattling and plastered in daub, or a mixture of both stone and wattling as being built here (left). Wattle and daub is one of the oldest building techniques dating back to the Bronze Age and beyond. Wattling is a way to build walls by weaving long flexible sticks in and out of upright posts. Hazel, which is pliable and grows naturally long, is a good species to use for wattle.

Pearltrees I spent at least an hour transferring images from Pinterest (it took up 30% of my space) and it immediately slowed my iPad way down. Not just the app was slow (I had to scroll very slowly so it wouldn’t crash immediately, although it still crashed every few minutes), but literally my entire iPad lagged. Also there needs to be more explanation for the hold/drop functions. Too many times I accidentally sent hundreds of photos somewhere else, including into the Dropbox where I had to replace them all individually which took ages. I couldn’t figure out if there was a way to transfer all the Dropbox stuff back into the collection all at once.

Dropbox Dropbox is a creative collaboration space designed to reduce busywork, bring your files together in one central place, and safely sync them across all your devices—so you can access them anytime, anywhere. And sending large files is easy, even to people who don’t have a Dropbox account. Features like the doc scanner, shared folders, offline access, and more make collaborating with others simple. Features: • Work on files with others through shared folders • Use the document scanner to turn receipts, whiteboards, and notes into PDFs • Comment on files to share feedback with your team • Sync, share, and edit Word, Excel, and PowerPoint files We offer a free 30-day trial and in-app purchases for Dropbox Plus.

Tiny Wind & Solar Powered Home Lets You Live Off The Grid Anywhere In The World Ecocapsules, designed by Bratislava-based Nice Architects, promise to let anyone live off the grid for up to a year. Each unit is equipped with solar panels, a retractable wind-turbine, and a design that captures rain water. Inside, you’ll find a kitchenette with running water, a flushing toilet, and hot shower. The Ecocapsule “is suitable for a wide range of applications,” write the designers, such as an “independent research station or a tourist lodge to an emergency housing or a humanitarian-action unit.” Those interested in buying one will be able to pre-order at the end of 2015, with delivery in the first half of 2016.

Dropbox Review Dropbox is among the simplest and most elegant cloud storage and file-syncing services. It gives you access to your files from nearly anywhere. You can install DropboxFree at Dropbox on virtually any computer or mobile device you own, and dozens of other apps support integration with Dropbox, too. For personal use, Dropbox works simply and effortlessly. It now also supports real-time collaboration for Office Online users, so you and your colleagues can access and edit the same Dropbox file at the same time while seeing one another's changes appear on the screen as they happen. Dropbox is an excellent choice for online storage, though it doesn't quite beat Editors' Choices Google Drive and Microsoft OneDrive for value.

How Whole Turmeric Heals The Damaged Brain Long considered impossible to accomplish, new research reveals how a simple spice might contribute to the regeneration of the damaged brain. Turmeric is hands down one of the, if not the, most versatile healing spice in the world with over 600 experimentally confirmed health benefits, and an ancient history filled with deep reverence for its seemingly compassionate power to alleviate human suffering. But, most of the focus over the past decade has been centered on only one of its many hundreds of phytocompounds: namely, the primary polyphenol in turmeric known as curcumin which gives the spice its richly golden hue. This curcumin-centric focus has lead to the development of some very good products, such as phospholipid bound curcumin concentrate (e.g. Meriva, BCM-95) which greatly helps to increase the absorption and bio-activity of curcumin. Truth be told, there is no singular ‘magic bullet’ in foods and herbs responsible for reproducing the whole plant’s healing power.

Sugar Harms Your Brain Health, Drives Alzheimer’s Epidemic By Dr. Joseph Mercola Guest Writer for Wake Up World Alzheimer’s disease, a severe form of dementia, affects an estimated 5.2 million Americans, according to 2013 statistics.[1] One in nine seniors over the age of 65 has Alzheimer’s, and the disease is now thought to be the third leading cause of death in the US, right behind heart disease and cancer. A growing body of research suggests there’s a powerful connection between your diet and your risk of developing Alzheimer’s disease, via similar pathways that cause type 2 diabetes. Exploring the Superconscious Interview with Dr Edward Bynum, author of Dark Light Consciousness Author: Jair Robles We are all familiar with its symbolic representations, be it from the caduceus used by modern medicine, the winged serpent of Prehispanic Mesoamerican cultures or the dragons commonly seen at most Asian celebrations. It is said to represent a dormant energy that lies within every one of us, at the base of the spine, and that when this energy is awakened and driven into the brain it opens up our access to higher states of consciousness and our connection to the divine. Much of the disciplines and practices developed by the ancient traditions and practiced at the mystery schools were geared to this sole purpose. It is refreshing and exciting to find that current scientists and scholars, such as Dr Edward Bynum, are making an effort to bring this knowledge back for the scrutiny and study of modern science.

In the Shadow of Hegel: How Does Thought Arise Out of Matter? What's the Big Idea? Before neuroscience and quantum physics, there was Georg Wilhelm Friedrich Hegel. The 19th century German idealist revolutionized Western thought, and every great thinker since has been working in his shadow, says Slavoj Žižek, the Slovenian philosopher and cultural critic. Watch the video interview: Often seen as a precursor to Marxists and existentialists, Hegel believed that knowledge is not static, but dynamic. In the Hegelian framework, history is a process in which many paradoxes interact and are then synthesized into a unified whole. untitled Introduction Robert Monroe developed and patented a binaural-beat technology called the Hemi-Sync auditory-guidance system. The Monroe Institute, a 501c(3) nonprofit research and educational organization, uses this Hemi-Sync system within an educational process.

Rosenhan experiment Experiment to determine the validity of psychiatric diagnosis Rosenhan's study was done in eight parts. The first part involved the use of healthy associates or "pseudopatients" (three women and five men, including Rosenhan himself) who briefly feigned auditory hallucinations in an attempt to gain admission to 12 psychiatric hospitals in five states in the United States. Scientists Claim That Quantum Theory Proves Consciousness Moves To Another Universe At Death A book titled “Biocentrism: How Life and Consciousness Are the Keys to Understanding the Nature of the Universe“ has stirred up the Internet, because it contained a notion that life does not end when the body dies, and it can last forever. The author of this publication, scientist Dr. Robert Lanza who was voted the 3rd most important scientist alive by the NY Times, has no doubts that this is possible. Beyond time and space Lanza is an expert in regenerative medicine and scientific director of Advanced Cell Technology Company.

What Does It Mean When You Dream About Snakes? When you dream about snakes, chances are that the meaning of what you just dreamed about is related to challenging issues and feelings that you’re facing in your daily life. Related Ads To Inspire Dreams According to Freud’s classic dream interpretation theory, a snake featured in a dream represents a phallic symbol that could relate to a male figure, male energy or how you experience your sexuality. Difference Between Hermeticism and Gnosticism? When first discovering Gnosticism and Hermeticism, one is nearly buried and crushed by what amounts to an avalanche of feeble neo-occult and academic nonsense that attempts to define what these two traditions are. I have heard and read the following questsion: “What are Hermeticism and Gnosticism? Are they the same thing? “If not, how do they differ? What is a tradition and where do these traditions come from?” In response to these questions are some of the most ridiculous explanations I have ever heard or seen – Hermeticism comes from Atlantis while Gnosticism was brought to Earth by aliens – who founded Atlantis.