Teaching Adolescents How to Evaluate the Quality of Online Information 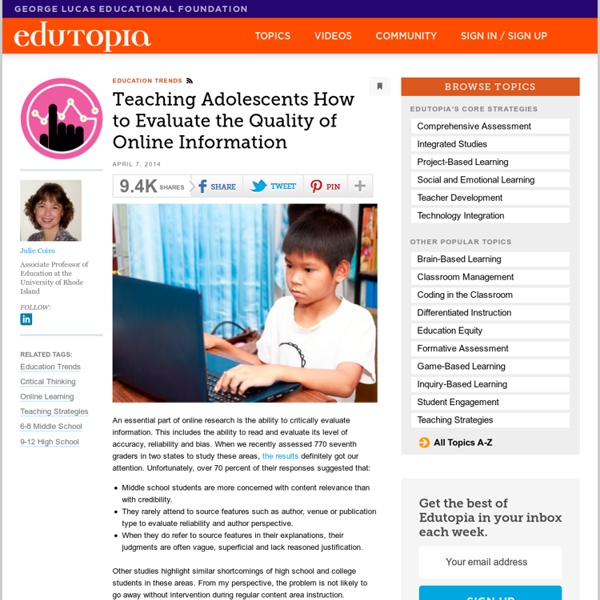 An essential part of online research is the ability to critically evaluate information. This includes the ability to read and evaluate its level of accuracy, reliability and bias. When we recently assessed 770 seventh graders in two states to study these areas, the results definitely got our attention. Unfortunately, over 70 percent of their responses suggested that: Middle school students are more concerned with content relevance than with credibility.They rarely attend to source features such as author, venue or publication type to evaluate reliability and author perspective.When they do refer to source features in their explanations, their judgments are often vague, superficial and lack reasoned justification. Other studies highlight similar shortcomings of high school and college students in these areas. So, what can you do to more explicitly teach adolescents how to evaluate the quality of online information? 1. Figure 1. 2. 3. Figure 2. 4.

Introducing Showbie 1.3 - Showbie As many of you may already have noticed, Showbie 1.3 hit the app store last week. This update has been in the works for a long time, so we’re super excited to finally be able to share it with you! Besides a full visual overhaul, this version includes several new features, tweaks and improvements. Fresh New Look Showbie has been in need of a fresh coat of paint ever since iOS7 was released last fall. Update Indicators We’ve added new visual indicators to classes, assignments, and student folders. Improved Voice Notes We’ve replaced the strange glowing microphone with a fun, analog-style volume meter, which will give you a more responsive and accurate indication of your recording level. Longer Videos Video recording size has been increased to 5 minutes per clip for Pro users! Showbie Annotations on Image Files Don’t worry about choosing between Camera and Capture PDF when you create a new file in Showbie. Improved Menus and Settings More to Come