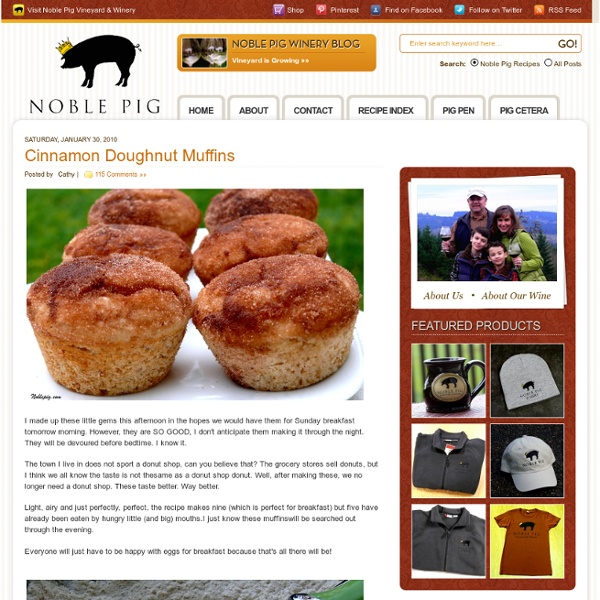 I made up these little gems this afternoon in the hopes we would have them for Sunday breakfast tomorrow morning. However, they are SO GOOD, I don’t anticipate them making it through the night. They will be devoured before bedtime. I know it. The town I live in does not sport a donut shop, can you believe that? The grocery stores sell donuts, but I think we all know the taste is not thesame as a donut shop donut. Light, airy and just perfectly, perfect, the recipe makes nine (which is perfect for breakfast) but five have already been eaten by hungry little (and big) mouths.I just know these muffinswill be searched out through the evening. Everyone will just have to be happy with eggs for breakfast because that’s all there will be! In a large bowl,sift flour, baking powder, salt, nutmeg and cinnamon; whisk to combine. In another bowl, combine sugar, oil, egg, and milk. Stir wet ingredients into dry ingredients just until moistened. Serve warm or room temperature. Print Recipe Ingredients

A Tasty Recipe: That’s the Best Frosting I’ve Ever Had – Tasty Kitchen Blog I’ve been intrigued with this frosting recipe for months, not just because of its alluring title, but also because if its ingredients. Five tablespoons of flour? In frosting? Let’s just say my interest was piqued. Rainbow Jello Recipe June 22, 2010 When I was young, rainbow Jello would always be one of the offerings on the dessert table. I used to peel the layers of Jello apart and eat them one by one, my favourite being cherry.

raspberry lemonade bars I know this seems like a bit of a cop out, seeing as last year I made those lime bars, but the name of these just makes you want one, doesn’t it? It’s like one last throw back to the summertime captured in a cookie. raspberry lemonade bars for the crust: 9 tablespoons unsalted butter (1 stick, plus one tablespoon) 1/4 cup (50g) superfine sugar (or regular granulated) 1 cup (100g) of unbleached all-purpose flour pinch salt

Coca-Cola Cupcakes I don’t drink coca-cola. But I do eat it. Weird. Yeah, I dunno. It’s way better eaten. Let’s take a look, shall we? Outrageous Oreo Crunch Brownies Now these brownies are just dangerous. It made a huge 9x13 pan (and this was halving the recipe) and I ended up freezing most of them. And now for the past couple of months I've been slowly nibbling away at my stash. I love eating them frozen - they're so fudgey, rich and chocolatey. Yum yum dangerous. Of course they're delicious at room temperature too.

Pie Pops Alber Elbaz speaks about “lightness” during interviews before his collections. I think his summation of what women need seems pretty accurate. Yes, we need lightness/ease/mobility. I love the way Elbaz makes clothes. His Lanvin spring 2008 collection made me cry. I like lightness. Chocolate Raspberry Vanilla Bean Marshmallows Chocolate Raspberry Vanilla Bean Marshmallows Candies, Chocolate, Dessert, Holiday Recipes, Kid Friendly Recipes, Kitchen Gifts, Valentine's Day | 28 comments Do you need a fun treat for Valentine’s Day? Or maybe something cute to do with the kids? These Homemade Marshmallows are so much fun! We’ve made them before as Chocolate Candy Cane Marshmallows for Christmas, but I thought it would be fun to dress them up as Valentine’s Day treats too!

Lemon Ginger Muffins Method 1 Adjust the oven rack to the middle-lower part of the oven. Preheat oven to 375°F. 2 Whisk together the flour, baking powder, baking soda, and salt and set aside. My I-thought-I-had-an-original-idea ice cream cone cupcake pan Don’t you hate it when you get all your ice cream cones filled with batter only to have them tip over and spill in the pan when you try to put them in the oven? I decided to make a pan prototype to bake my cones in to stop the spills and mess! Yup, I made a prototype. Zebra Cheesecake recipe @Not Quite Nigella You know the story - girl meets recipe and falls in love after seeing recipe across the crowded internet. The recipe looks a bit different from what she is used to so girl is instantly intrigued. After the first tempting glimpse, girl can't get recipe out of her mind. Recipe even features in girl's dream that evening. Girl wakes up, thanks the gods of culinary fate that she has the ingredients to make that recipe and so begins the love story of the girl who met a Zebra cake. Tuty's lovely blog Scent of Spice was the blog that first introduced me to this amazing Zebra cake.

Double Chocolate Peanut Butter Sandwich Cookies 1. Heat oven to 350°F. 2. One Bowl Red Velvet Cupcakes Before I moved to Texas, I had never heard of red velvet cake. I’ve lived here from almost 4 years now, and I have yet to really understand it. What flavor is red? There are a few tablespoons of cocoa powder in it, but hardly enough to call it a chocolate cake. cake batter blondies. I don’t say this very often. But this is one of the most delicious things I’ve ever eaten. Remember how I made dense, fudgy brownies by using a boxed chocolate cake mix? Well, let’s just say that I haven’t been able to stop imagining doing the same with a yellow cake mix ever since. I thought, if this method can get me to actually love chocolate, how insanely good would a cake version be??

How to Microwave Gourmet Popcorn in a Brown Paper Bag Peeeeee-yew! I’m done with the stinky stench of microwave popcorn. Actually, I haven’t popped a single bag of that toxic smelling stuff in years since I hate the thought of being swindled by a stank bag of greasy kernels. That’s right people, I’m calling foul on microwave popcorn since it’s a reeking wallet rip off.