BedStamper. Land imprinter? (permaculture forum at JavaRanch) Mangudai- I hate it when threads side track I agree about tall and shortgrass prairie ecosystems and buffalo. 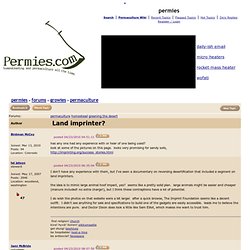 I agree that JD Burgess has an axe to grind (though I've never met or talked to him, so then again, you might too if you've seen what he's seen). I am excited about pulsed grazing--how it aligns well with the way plants can support soil building. I agree we need to experiment and watch what the land tells us. In the columbia basin the stocking rate is so low, that it is hard to justify building and maintaining enough fencing to control grazing and keep the operation economical. I wanted to create an opening for the possibility that economical commercial beef production may not be appropriate for some ecosystems, or that cattle grazing needs to be managed in different ways in different systems to different ends, and that in arid systems, you are playing with fire.

These were the kinds of statements that I reacted to most strongly: "Cattle can be used in every country. Seeding. Seeding Seeding is the metering and distribution of seed either by broadcasting on the soil surface or by placing seed into the soil at a predetermined depth. 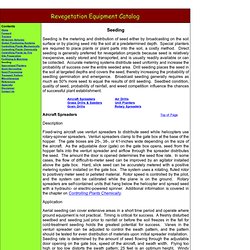 Special planters are required to place plants or plant parts into the soil, a costly method. Direct seeding is generally preferred for revegetation projects because seed is relatively inexpensive, easily stored and transported, and is usually readily available or can be collected. Accurate metering systems distribute seed uniformly and increase the probability of success over the entire seeded area. 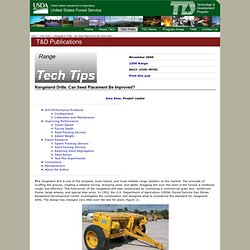 Gary Kees, Project Leader The rangeland drill is one of the simplest, most robust, and most reliable range seeders on the market. The principle of scuffing the ground, creating a shallow furrow, dropping seed, and lightly dragging dirt over the seed in the furrow is relatively crude, but effective. The forerunner of the rangeland drill was constructed by combining a commercial grain box, reinforced frame, large wheels, and special disk arms. In 1952, the U.S. Figure 1—The basic design and function of the rangeland drill has changed little over the last 50 years.

The standard rangeland drill has been in use for more than 50 years. Some newer rangeland drills, such as the Truax Rough Rider, combine technologies from the original rangeland drill with those of more modern no-till type agricultural drills (figure 2). Mike Pellant (BLM, Vale, OR) and David Pyke (U.S. Drill Performance Problems Configuration Calibration and Maintenance Seed Boxes. History_of_Rangeland_Drill.pdf (Objet application/pdf) 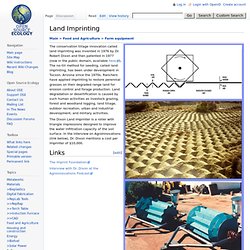 Robert Dixon and then patented in 1977 (now in the public domain, available here). The no-till method for seeding, called land imprinting, has been under development in Tucson, Arizona since the 1970s. Ranchers have applied imprinting to restore perennial grasses on their degraded range land for erosion control and forage production. Land degradation or desertification is caused by such human activities as livestock grazing, forest and woodland logging, land tillage, outdoor recreation, urban and industrial development, and military activities. The Dixon Land Imprinter is a roller with triangle impressions designed to improve the water infiltration capacity of the soil surface. 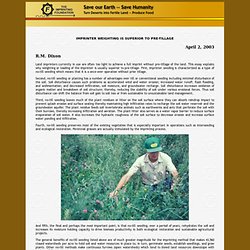 DixonLand imprinters currently in use are often too light to achieve a full imprint without pre-tillage of the land. This essay explains why weighting or loading of the imprinter is usually superior to pre-tillage. First, imprinter seeding is characterized as a type of no-till seeding which means that it is a once-over operation without prior tillage. Second, no-till seeding or planting has a number of advantages over till or conventional seeding including minimal disturbance of the soil. Soil disturbance causes such problems as accelerated wind and water erosion; increased water runoff, flash flooding, and sedimentation; and decreased infiltration, soil moisture, and groundwater recharge.

Nuts and Bolts of Imprinting. How the Imprinting Machine WorksDuring the past two decades, the general specifications for land imprinters were derived from the principles of soil mechanics and the hydro-biotic function of soil imprints. 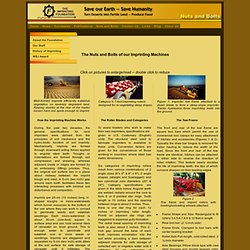