Strawberry Applesauce. For true apple-lovers, U-pick season can be a bit of a mixed blessing. 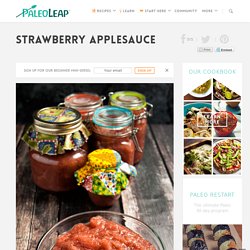 On the one hand, so many delicious fresh apples! And you get to go out yourself and choose your favorites in the sunshine and the fresh Fall air! But on the other hand, there are only so many apples anyone can eat at once, and by the time you’re into the third or fourth pint it can be hard to know exactly what to do with all the bounty Enter applesauce. Use this quick recipe to preserve the apples you buy now for a cold day down the line. Dried Fruit Bars. With more and more people wanting easy snack options that don’t come along with a huge pile of junk, stores are starting to carry a lot more simple fruit and nut bars that aren’t full of puffed rice, weird whey isolates, soybean oil, and whatever it is they make that weird chocolate energy-bar coating out of (it can’t possibly be chocolate, because it doesn’t actually taste anything like chocolate…what is it?). 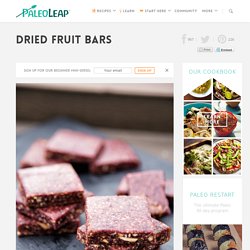 These products are definitely too high in sugar to eat every day, but they’re great in a pinch. On the other hand, they’re pretty expensive, so why not just make your own so you can save some money and come up with the perfect flavor combination designed specifically for you? This recipe is for a cranberry-almond version, but you could use any other type of dried fruit to make totally different-tasting bars. What about dried apples? Apricots? PREP: 15 min. COOK: 10 min. Ingredients 1 cup dried Medjool dates, pitted;1 cup raw almonds;1 cup dried cranberries; Preparation. Pineapple with Lime and Mint.

A 1982 guide to picking a pineapple starts off by calling it a “stately leaf-crowned, prickly-skinned fruit with [a] luxurious, juicy, sweet-sour interior” – that’s a little hyperbolic, but fresh pineapple slices do make a nice dessert. 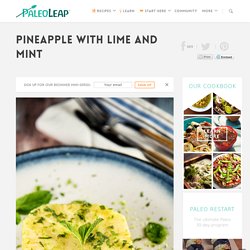 This ultra-simple preparation won’t win you any prizes for the fanciest recipe in the house, but it’s easy to stack the pineapple rings so that it looks elegant, and sometimes a plate of fresh fruit is all you really want for a quick dessert. Nutritionally, the pineapple’s biggest selling point is Vitamin C – if you make this recipe for four people, each person will get well over 100% of the RDA. It’s also got reasonable amounts of some of the B vitamins, potassium, magnesium, copper, and manganese.

Raspberry-Lime Fruit Dip. From whipped cream to chocolate to cheese, everyone loves dipping fruit in stuff – it’s an easy way to dress up a plate of plain fruits for a party, or add a little extra flavor to dessert. 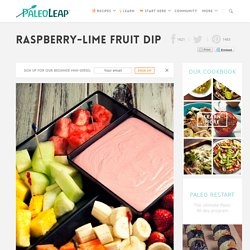 This variation is sweet and cold and a little bit tangy – if you like fruit with yogurt, you’ll like this. Make sure to get full-fat coconut milk for this recipe; otherwise it gets too watery (actually, it’s a good idea to buy full-fat coconut milk in general; otherwise you’re just paying the same for a watered-down product. If you really want thinner liquid, you can add your own water from the tap). This is a great recipe for kids: eating off of toothpicks is fun, and dipping things is always a hit. But it works just as well for adults as an appetizer or dessert for a crowd (especially if you don’t feel like pulling out the whole repertoire of Paleo baking and just want something simple and tasty). PREP: 15 min. COOK: 0 min. Ingredients Preparation. Fruit Banana Split. This Paleo adaptation of a banana split adds some interest and fun to a plate of fruit for dessert, and it’s easy to tweak so it’s exactly to your tastes. 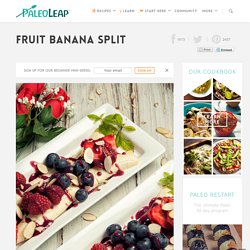 Customize the base recipe with any kind of fruit and nuts you like: you could go with berries or pick another fruit and just cut it to the right size. The same goes for the nuts; pick your favorite mix and don’t be afraid to experiment (for convenience, you can often find slivered or chopped nuts in the baking aisle). All laid out on a plate with the sauce thing everything together, it looks pretty fancy, but this is actually one treat that’s easy to pull together – without any Paleo baking to do, the actual work is done in just a few minutes.

Homemade Applesauce. Were you hoping to use applesauce in your seasonal cooking, but you keep finding yourself in the grocery store reading label after label and trying in vain to find a brand that doesn’t contain all kinds of weird preservatives you can’t pronounce? 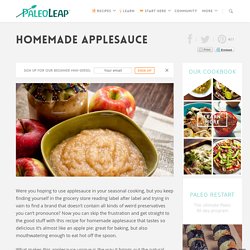 Now you can skip the frustration and get straight to the good stuff with this recipe for homemade applesauce that tastes so delicious it’s almost like an apple pie: great for baking, but also mouthwatering enough to eat hot off the spoon. What makes this applesauce unique is the way it brings out the natural contrast already in the apples between sweetness and tartness. First of all, the apples are roasted, which concentrates their flavor better than the usual stovetop cooking. Cinnamon and nutmeg add a deep, rich heat, but then a little bit of lemon juice adds a little bite to amp up the contrast between savory and tangy. And of course, adding more fat always makes everything tastier, so don’t skimp on the ghee!

PREP: 15 min. COOK: 30 min. Apple Pie Baked Apples. Mini-pies baked inside an apple are adorable and perfect for a sweet dessert without some kind of incredibly laborious nut-flour crust. 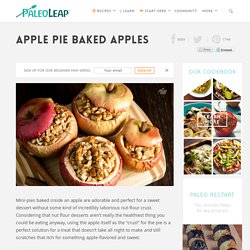 Considering that nut flour desserts aren’t really the healthiest thing you could be eating anyway, using the apple itself as the “crust” for the pie is a perfect solution for a treat that doesn’t take all night to make and still scratches that itch for something apple-flavored and sweet. The only thing you’ll really have to watch out for here is making sure you don’t break the skin while hollowing out the apples: other than that, it’s pretty much a fuss-free process from start to finish. The walnuts give everything a hearty crunch, and the spice is simple but classic: vanilla and cinnamon to bring out the sweetness of the fruit. Fruit Pudding. Are you hankering for something cold and sweet to finish off a summertime dinner? 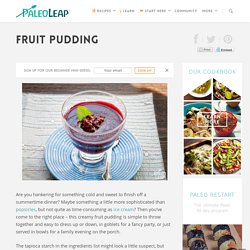 Maybe something a little more sophisticated than popsicles, but not quite as time-consuming as ice cream? Then you’ve come to the right place – this creamy fruit pudding is simple to throw together and easy to dress up or down, in goblets for a fancy party, or just served in bowls for a family evening on the porch. The tapioca starch in the ingredients list might look a little suspect, but there’s nothing to worry about here. Tapioca is a dry powder extracted from cassava roots, which are a safe starch and perfectly safe to eat.

You might also find it in the grocery store as “cassava starch” or “yucca starch.” Baked Apple Chips. Looking for a kid-friendly, grab-and-go snack that’s a little more nutritious than goldfish crackers? 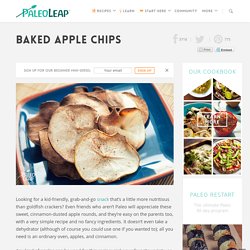 Even friends who aren’t Paleo will appreciate these sweet, cinnamon-dusted apple rounds, and they’re easy on the parents too, with a very simple recipe and no fancy ingredients. It doesn’t even take a dehydrator (although of course you could use one if you wanted to); all you need is an ordinary oven, apples, and cinnamon. Any kind of apples can be used for this recipe: pick your favorite variety, or just use whatever you can find in season. Fried Honey Banana. Looking for a treat that’s just for one? 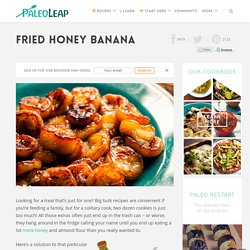 Big bulk recipes are convenient if you’re feeding a family, but for a solitary cook, two dozen cookies is just too much! All those extras often just end up in the trash can – or worse, they hang around in the fridge calling your name until you end up eating a lot more honey and almond flour than you really wanted to. Here’s a solution to that particular problem: a quick treat sized perfectly for a single person, and without the prep and cleanup of a whole big recipe. Banana slices fried in coconut oil are crispy and caramel-sweet on the outside but warm and soft in the middle. Fruit Juice Gelatin. Gelatin is the protein that gives bone broth its thick, velvety texture, and also the reason for many of its joint-healing and gut-soothing health benefits. But did you know that it’s also the magic behind commercial Jell-O desserts? Stir it into a room temperature liquid and pop everything into the fridge, and watch as it sets into the familiar quivery solid. Watermelon, Raspberry and Mint Salad.

Satisfy your sweet tooth and brighten up any meal with a cheerful pink and green salad: juicy chunks of watermelon, plenty of fresh berries, and a refreshing hint of mint and lime juice. Broiled Grapefruit. The standard response to a grapefruit is to either smother it with sugar, or eat it out of a can loaded with sugary syrup, masking the fruit’s natural tang and acidity behind a comforting blanket of sweetness.

But eating grapefruit this way essentially turns a very healthy food into a bowl of candy – and that’s certainly no way to start the morning! Don’t give up grapefruit altogether, though. Yes, they’ve been overhyped by fad diets like the Grapefruit Diet, and they won’t magically melt 10 pounds off your hips, but even without the hype, they’re definitely a food worth including in your diet. Grapefruit are high in Vitamin C and many different types of antioxidants. And there’s actually some truth to their cholesterol-lowering effects: in a study in Israel, participants who added red grapefruit to their diet lowered total cholesterol by 15.5% and LDL specifically by 20.3%: not too shabby!

PREP: 5 min. COOK: 6 min. Ingredients Preparation. Apple Cinnamon Fruit Rolls. I just recently purchased a dehydrator and I’ve since been experimenting with various recipes. The main reason for making the purchase was so that I could enjoy one of my favourite childhood snacks: fruit rolls, also known as fruit leathers. It’s great to have on hand, especially if you tend to travel a lot. During the warmer months I’m an avid camper and nothing seems quite as satisfying as these fruity Paleo snacks. It’s just nice to not have to fuss with travelling with the equivalent quantities of fresh fruit.

Also, if you have children, this is a guaranteed hit. Almond and Grape Stuffed Pears. Paleo dessert: baked and fried apples. For those who are looking for a quick fix for their sweet tooth while still staying in the boundaries of Paleo, these recipes are perfect.