Soegaard and Dam 2013: The Encyclopedia of Human-Computer Interaction, 2nd Ed 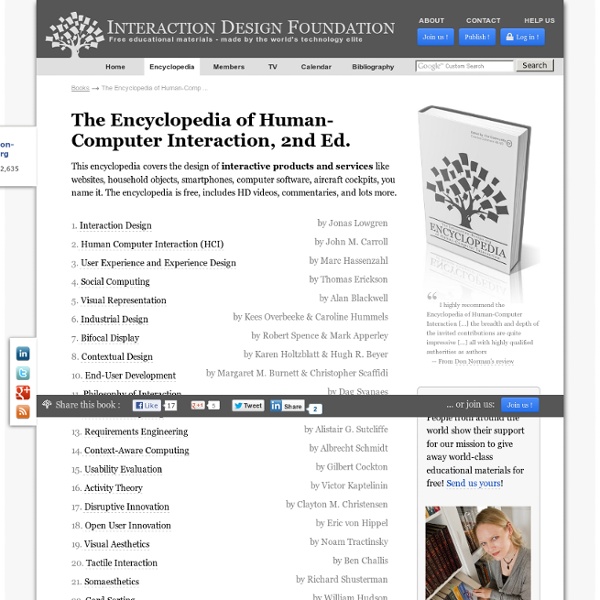 Case Study: Freescale Netbook Design at SCAD, by Dave Malouf Posted by core jr | 5 Aug 2009 | Comments (6) Final design by Mason Pfau UI Touchscreen design for a netbook aimed at tweens 10 Effective Video Examples of Paper Prototyping Paper prototyping is a commonly used low cost usability method for testing and evaluating web designs and applications. This method lets developers conduct tests before a single line of code has been written, and allows you to identify and fix any potential issues early on in development. “Paper prototyping is a variation of usability testing where representative users perform realistic tasks by interacting with a paper version of the interface that is manipulated by a person ‘playing computer,’ who doesn’t explain how the interface is intended to work.” Quote from Carolyn Snyder. In this post we have collected our top 10 videos that not only illustrate how effective paper prototyping can be, they also show you how to cost effectively conduct your own tests and some of the videos have been animated, which are just amazing to view. Paper Prototype Animation

Must have OS X apps for UX/UI developers and designers Yep, it’s the post every Mac user has to publish at least once in their lifetime. But hear me out now; If you’re a designer or developer, you might this list useful. Efficiency is the root of all evil I like efficiency. It gives me a sense of clarity, and completeness. The Ethics of Influence and Manipulation — Robot Regime More and more, as we investigate how psychology and behavioral science can be used in design, the topic of morality comes to light. Where does the ethical boundary lie between persuasion and manipulation? Neutrality in design A Brief History of Design Thinking: The Theory [P2] The Second Wave (1980s-1990s) After its initial breakthrough on the academia scene, design theory shifted into a somewhat soul searching phase that saw many scholars reflecting on the cognitive aspects of design; what it means to be creative, how much relies on intuition and how personal is the process. Design theorists that emerged during this period remain household names today. This is potentially due to the fact that design theory has not undergone much of a revolution since this reflective phase.

Wizard of Oz This tool takes the name from the story The Wizard f Oz, more specifically it takes the name from the figure of the character under the curtain. It is a technique derived from the information technology that is used in order to test a product or a service in a detailed way by observing the interaction of a potential user with the object without revealing the evaluator’s presence. References: (1984) J.F. Kelley, An Iterative Design Methodology for User-Friendly Natural Language Office Information Applications, ACM Transactions on Office Information Systems. (2004), J.

The Five Competencies of User Experience Design By Steve Psomas Published: November 5, 2007 Throughout my career as a user experience designer, I have continually asked myself three questions: What should my deliverables be? Will my deliverables provide clarity to me and their audience? UX, psychology & the ‘dark arts’ Last week I presented at UX Bristol. The talk was titled, UX, psychology and the ‘dark arts’. There was a certain amount of debate on the day about how psychology and the ‘dark arts’ are being used. I’ve been lucky enough to work with The Trainline, which sells train tickets online. Their website also sells add-ons, like travel insurance. One of the first things I noticed was that the travel-insurance option was pre-ticked.

design thinking If some of you follow me on Twitter, you would already know that i recently posted a question to my tweeps asking what they would prefer to see more of on my blog. The overall response favored an academic discussion; posting papers and discussing in context of practice. Missing out by a whisker was the second most popular response, which was more lolcats and memes. Realising i haven’t posted anything related to sustainable practice in a while (yes its not going to go away) i thought i should hunt around for something that was new, interesting and could somehow be taken away by you folk and applied (even if just ideologically) into practice.

25 User Experience Videos That Are Worth Your Time Advertisement We’re all mostly accustomed to educating ourselves by reading articles. Rare are the opportunities to attend conferences or watch live shows on subjects that we’re interested in. The Difference Between Usability and User Experience As long as there’s been an Internet, the discussion between user experience and usability has been explored. Although they are conceptually linked, taken separately, they highlight different elements of the human-computer interaction. Yet in these days of advanced user interfaces, from mobile devices to e-readers to tablets, has the line between user experience and usability blurred? And if so, what does it mean for web standards and design? We examine their distinctions, roles and implications in an effort to answer these questions.

First Principles of Interaction Design The following principles are fundamental to the design and implementation of effective interfaces, whether for traditional GUI environments, the web, mobile devices, wearables, or Internet-connected smart devices. Help! This is a huge revision. I expect I have made mistakes.