Would You Live in a Shipping Container? 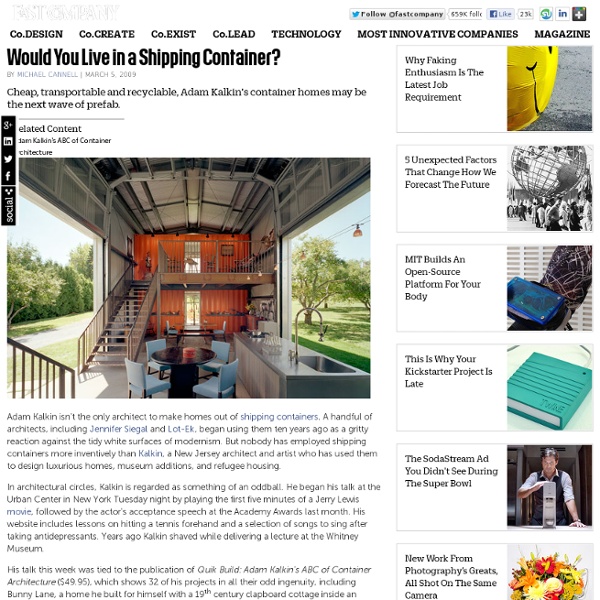 Adam Kalkin isn't the only architect to make homes out of shipping containers. A handful of architects, including Jennifer Siegal and Lot-Ek, began using them ten years ago as a gritty reaction against the tidy white surfaces of modernism. But nobody has employed shipping containers more inventively than Kalkin, a New Jersey architect and artist who has used them to design luxurious homes, museum additions, and refugee housing. In architectural circles, Kalkin is regarded as something of an oddball. He began his talk at the Urban Center in New York Tuesday night by playing the first five minutes of a Jerry Lewis movie, followed by the actor's acceptance speech at the Academy Awards last month. His website includes lessons on hitting a tennis forehand and a selection of songs to sing after taking antidepressants. For all his artsy provocations, Kalkin's strategy makes some practical sense. "Quik Build" arrives as modernist prefab has begun to lose its bargain appeal after years of hype.

Ultimate Underground Home: Converted Nuclear Missile Silo « Dornob Like something straight from a science fiction or horror movie scene, this underground nuclear missile silo was once a dank, dark and deserted structure of interest to no one – until man saw past the pooled water and cracked concrete and began to build by hand the ultimate underground dream house for himself in the family. Occupying only a third of the nearly 20,000 available square feet of total military base, Ed Peden and his family live in a world of weird wonder purchased for a relative pittance at $48,000 and derelict for decades when he went to buy it. On the surface, former escape hatches now look like castle turrets and a shack-like structure is about all there is to mark the entrance to this domain. Fortunately for the family, the gigantic missile bay was an early model set horizontally in the ground – a parked rocket-loaded truck was designed to drive out, angle the rocket and fire if needed.

Marlins Park in Miami, Baseball’s Newest Stadium Lumbering and dizzyingly white in the Florida sun, the new Marlins Park is an elliptical concrete, steel and glass boulder looming above the low-rise houses and empty lots of the Little Havana neighborhood. With retail on the outside and a public plaza in front, it’s designed partly to gin up some street life. Economic development is supposed to follow — that was the rationale for the public financing that covered most of the $634 million project ($515 million for the park itself) and contributed to the recall of Miami-Dade County’s mayor.

franklin azzi architecture: passive house, normandy france may 25, 2009 franklin azzi architecture: passive house, normandy france ‘passive house’ image courtesy franklin azzi architecture franklin azzi architecture designed ‘passive house’, through renovating a former hunting house in normandy, france. the extension consists of wood, canvas covers a camouflage of the cuban army. above is a wooden terrace overlooking the valley. slabs of the house to the left and right include a heated floor and external industrial sockets. in front of the house is a bunker made from concrete for an office. the project meets the requirements of high environmental quality as it includes rainwater collection, the use of solar energy (hybrid) and geothermal energy, and reduction of raw material by optimizing the efforts to structure. the assembly of the structure was done on site with all recyclable materials from a distance of 100km. wood and vegetable fibers are used for the walls providing insulation and windows provide natural ventilation, etc.

CNC carpentry: the 'selfsupportingframework' Two students working on load-bearing systems in the architecture department at Kassel University, Mischa Proll and Andreas Günther, have taken advantage of the wide range of design techniques available and breathed new life into a one-hundred-year-old construction concept. The traditional reziprocal frame consists of short wooden joists, whose ends are carpentry-joined to a surface structure. With consistant types of profiles, lengths of elements and positions of the knots on the axises, a dome shape is created.

Incredible Space Maximization in a Small Studio Apartment You’ve seen a lot of ingenious ideas on how to decorate small studio apartments on Freshome. Here is another tiny apartment that manages to maximize space and create a cozy living environment as well. The East Village Studio Apartment comes from JPDA Architects, stretches over an area of 46 square meters (500 square feet) and was built as a little “nest” for the owners who also work here. It has all the utilities a common looking contemporary home has and dare we say a lot more. Overlooked Feminist Architect Gets Her Due It was a cold January day in 2011 when I had last seen the Hotel Lafayette, the grand French Renaissance Revival styled brick that sits on the corner of Washington and Clinton Streets in downtown Buffalo, New York’s Lafayette Square. Built between 1901 and 1904, it was originally designed by Louise Blanchard Bethune (1856-1913), lead architect on the project with her firm Bethune, Bethune & Fuchs, which included her husband Robert Bethune and former apprentice William L. Fuchs. Louise Bethune carries the mantle of being the first woman in the United States to be recognized as a professional architect, with her inclusion in the Western Association of Architects in 1885, and then in 1888, when she became the first woman member of the American Institute of Architects (AIA) and then the first to become a Fellow, (FAIA), in 1889.

Modern Concrete House (15 photos) - My Modern Metropolis When you first think about the words concrete house, you might imagine a cold, sterile environment, perhaps something similar to a prison. If that's the case, this one story house designed by architecture studio A-cero will likely change your mind. Located on the outskirts of Madrid, Concrete House II features a façade that boasts a spectacular view of the whole house. The first impression that visitors usually get is that the building seems to be hidden between concrete walls and ramps that extend up to the roof. Shipping Container Homes - Cargo Container Houses Want your own container house? There's a six-month waiting list for the Quik House by architect Adam Kalkin, who is based in New Jersey. The distinctive Quik House comes in a prefabricated kit, based on recycled shipping containers (in fact a completed house is about 75% recycled materials by weight). The standard Quik House offers 2,000 square feet, three bedrooms and two and one-half baths, though larger options are also available. The shell assembles within just one day, and all the interior details can be finished within about three months.

earth-sheltered home Also known simply as an earth home, a dwelling that is partially or totally underground (see underground home) or that has earth berms around some or all of its exterior walls (see bermed earth-sheltered home). Earth-sheltered homes can be tailored to a wide range of climates and a variety of types of building sites – even flat ones. Combined with passive solar design, an earth-sheltered home can save tens of thousands of dollars in fuel bills over a lifetime. Earth-sheltered homes are comfortable, affordable and energy efficient. And, if thoughtfully designed, they allow in plenty of natural light and are far less of an imposition on the landscape than conventional above-ground houses. They also led themselves to innovative ideas in design and, in particular, the use of organic architectures including curving walls and ceilings that are more satisfying and harmonious as human dwellings.

Renzo Piano’s Nasher Museum in Dallas Has Sunburn Problem Brandon Thibodeaux for The New York Times At the Nasher museum in Dallas, Rodin’s “Age of Bronze” sits in dappled light as glare streams through a patterned screen. The results exceeded expectations. And Dallas has a mess on its hands. Skilpod House Design by B+ Architecten A glance at the design of the first Skilpod low energy house planned for beginning of 2014. The family home consists out of 3 Skilpods connected to each other, creating a very comfortable living space. The house will be build on a slope in Ham (Belgium) overseeing the surroundig area. The base of the building will be constructed in the slope.