Docker...Containers, Microservices and Orchestrating the Whole Symphony. Written by Uri Cohen The microservices architecture is far from a new trend, it’s generally accepted as a better way to build apps these days. 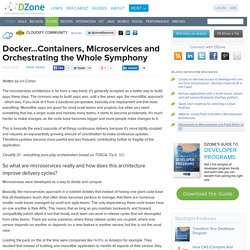 The common way to build apps was, until a few years ago, the monolithic approach - which was, if you look at it from a functional perspective, basically one deployment unit that does everything. Monolithic apps are good for small scale teams and projects, but when you need something that has a larger scale and involves many teams, it starts to become problematic. It’s much harder to make changes, as the code base becomes bigger and more people make changes to it. This is basically the exact opposite of all things continuous delivery, because it’s more tightly coupled and requires an exponentially growing amount of coordination to make continuous updates. Cloudify 3.1 - everything pure-play orchestration based on TOSCA.

So what are microservices really and how does this architecture improve delivery cycles? Ok, so what’s the open source connection? Orchestration holds the key to enterprise adoption of containers. According to results of a survey released a couple weeks ago, Docker is the second most popular open source project, behind OpenStack. 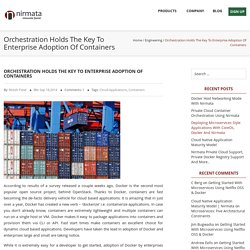 Thanks to Docker, containers are fast becoming the de-facto delivery vehicle for cloud based applications. It is amazing that in just over a year, Docker has created a new verb – ‘dockerize’ i.e. containerize applications. In case you don’t already know, containers are extremely lightweight and multiple containers can run on a single host or VM. Docker makes it easy to package applications into containers and provision them via CLI or API. Fast start times make containers an excellent choice for dynamic cloud based applications. While it is extremely easy for a developer to get started, adoption of Docker by enterprises requires significant tooling for production deployments. Lets take a look at what orchestrating containers is all about. Flexible Resource Allocation Resiliency Orchestration should ensure applications are deployed in a resilient manner. How to scale Docker containers in production.

Demystifying Kubernetes: the tool to manage Google-scale workloads in the cloud. Once every five years, the IT industry witnesses a major technology shift. 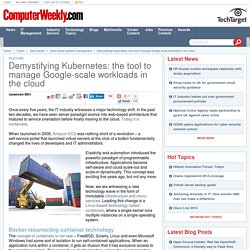 In the past two decades, we have seen server paradigm evolve into web-based architecture that matured to service orientation before finally moving to the cloud. Today it is containers. When launched in 2008, Amazon EC2 was nothing short of a revolution – a self-service portal that launched virtual servers at the click of a button fundamentally changed the lives of developers and IT administrators. thomaslerchphoto - Fotolia Elasticity and automation introduced the powerful paradigm of programmable infrastructure. Now, we are witnessing a new technology wave in the form of immutable infrastructure and micro-services.

Docker resurrecting container technology The concept of containers is not new – FreeBSD, Solaris, Linux and even Microsoft Windows had some sort of isolation to run self-contained applications. One company that democratised the use of Linux containers is Docker. New era of containers with Kubernetes. Re: [docker] Digest for docke...@googlegroups.com - 25 updates in 15 topics. Best container management, orchestration tools - Share your views. Rimas, I've seen some Docker demos where they use nginx as their load-balancer but they never talked about how nginx dynamically knew about the back-end servers as they scaled - or I just missed it. 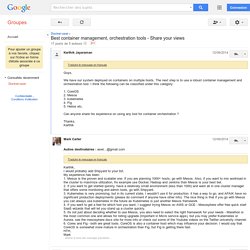