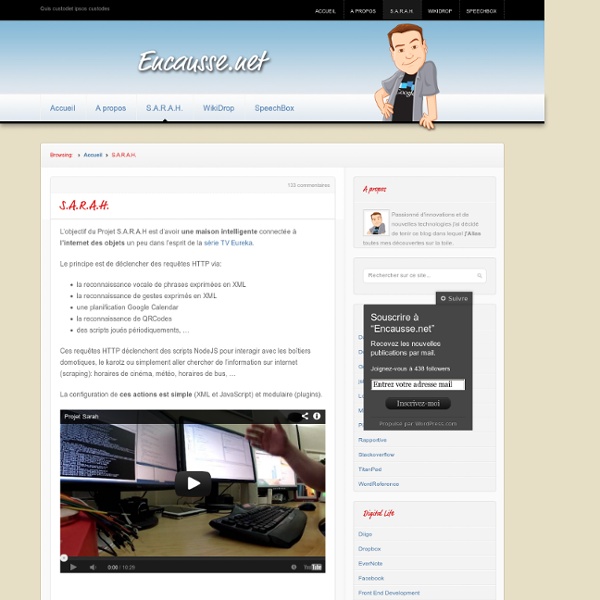 Raspberry Pi micro arcade machine - Intro The Raspberry Pi. Love it, hate it, but you'll have a hard time denying the fact that adding an EUR35 1GHz embedded machine to the arsenal of the average hobbyist is a good thing. Recently, I got one of the Pi's myself exactly because of that reason: it's always useful to expand your toolset with something powerful and cheap. I didn't get it for a specific reason other than the fact I may have to use it somewhere in the future and it would be fun to play with it. To make a long story short: Ofcourse I couldn't just be satisfied by just hooking it up to a TV and installing RaspBMC and playing some movies... so I ended up spending quit a lot more time than I originally envisioned.

Setting up LIRC on the RaspberryPi - alexba.in June 8th 2013 Update: I have completed a soldered circuit prototype, complete with a full parts list and high resolution build pictures. Please read Open Source Universal Remote - Parts & Picturse to learn more. March 9th 2013 Update: I have formalized the schematic and parts list that I’m using and have made it available on Upverter. Please read RaspberryPi IR Schematic for LIRC for more details. March 4th Update: I’ve written a follow up post that describes how to control your RaspberryPi universal remote from the web. Please check out Controlling LIRC from the web for instructions on how to install and configure the software.

the great ubuntu NAS project, continued… In my last “great ubuntu NAS project” post, I explained how to get an ubuntu server OS up and running with the absolute basics. Now let’s get this thing customized. I personally wanted to add the following to my rig: Arduino LCD avec seulement 3 broches It’s clear that I’ll have to connect an Ethernet Shield, an RFID reader, a keypad and an LCD display to the Arduino, so it’s essential that I make the best use of the available pins. I came across this article which explains how to connect an LCD to the Arduino using the 74HC595 8 Bit Shift Register using only 3 pins. The LCD I’ll be using is a basic black/white 16×2 unit from Proto-PIC. Here’s the datasheet. Here is the little sketch based on the code from the article; I’ve changed it slightly.

the great ubuntu NAS project Here we go folks. Complete, yet half-baked documentation on how to setup your very own home NAS using free Linux software. I know this has been written about before, and in fact I have pulled from many fine sources (see my acknowledgement below). This is documented here mainly so I don’t forget how I did this. Synth In a Box Synth In a Box Details Published on Friday, 13 January 2012 23:20 I have been conducting a series of music electronics workshops in conjunction with Switched On, the awesome Austin synthesizer shop. In the November 2011 workshop we build a new mini synthesizer that I designed. Building a living photo frame with a Raspberry Pi and a motion detector Every hardware hacker has a start, and this one is mine. My girlfriend bought me a Raspberry Pi for my birthday, and so I became determined to build something with it for her birthday two months later. As you can see above, I built a photo frame that has a few interesting parts. For one, the software which runs the photo frame, which I explore below, keeps the photos fresh from Instagram and Flickr. It then displays a random photo for a configurable six seconds.