My dog: the paradox 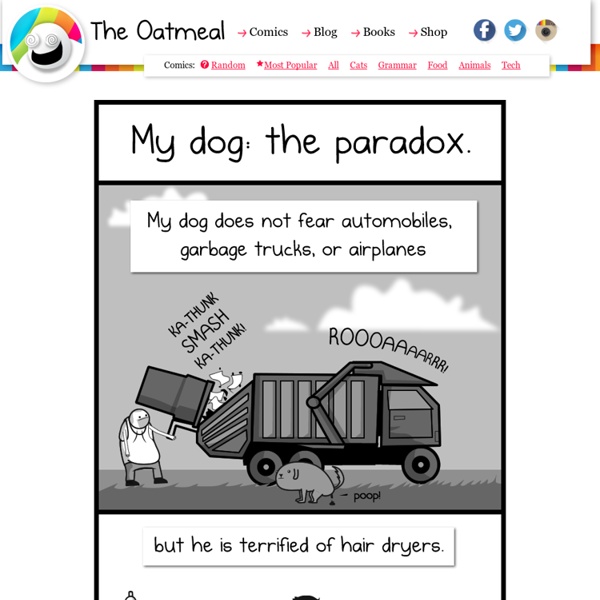 The Devil and Billy Markham Billy, Scuzzy, and God It's the Nashville Country Corner, all the low are getting high.And Billy tells his tale again to anyone who'll buy.With waving arms and rolling eyes, he screams to the drunken throng,"I've whipped the Devil and lived through Hell, now who's gonna sing my song?" Then from the shadows comes an oily voice, "Hey, kid, I like your moves."And out of the back slides a little wizened cat with brown-and -white perforated wing-tip shoes." "Accurate Candy Wrappers" by Chase Mitchell If Candy Wrappers Were Honest About What's Inside From Chase Mitchell on Illustrations by Jesse "Who laid a finger on my Butterfinger?" Eisemann. Comments ()

If Dogs Could Send Text Mails "Text From Dog" is an excellent set of fake SMS messages exchanged between a dog and his boss. Share The Top 75 ‘Pictures of the Day’ for 2012 *Update: The Top 100 ‘Pictures of the Day’ for 2012 have just been published. Click here to check out the most up-to-date post! After the positive reception from last year’s “Top 50 ‘Pictures of the Day’ for 2011“, the Sifter promised to highlight the top 25 ‘Pictures of the Day‘ at the end of every quarter, eventually culminating in an epic Top 100 for 2012. It’s hard to believe we’re already into the final quarter of 2012. With that, here are the Sifter’s Top 75 ‘Pictures of the Day‘ for this year. 100 legal sites to stream and download free music Music is life, I never found anyone who’s life isn’t influenced by Music. Why the best things in life like Music are not free? Actually, there is more legally available for free Music than you think. image by nothingatall Here is a list of 100 sites that let you stream or download music for free legally! This super list has sites where you can find most of your favorite songs and other awesome music that you will enjoy listening to.

Calvin and Hobbes' reclusive creator gives rare interview The American magazine Mental Floss warmed the hearts of comics fans on Thursday when it announced that it had succeeded where so many others have failed: securing an interview with Bill Watterson, the reclusive creator of the comic strip Calvin and Hobbes. It was only the second known interview with Watterson since he ended his popular strip in 1995. In the years since, Watterson retreated to a private life in north-east Ohio, where has carefully guarded the rights to his creation, refusing to license them or revisit them creatively. His contact with the outside world has been so rare, the magazine's editors told the Poynter Institute, that they put two fact-checkers on the case to be absolutely sure they were talking to the real Bill Watterson. Where do you think the comic strip fits in today’s culture?

30 Most Ridiculous Doodles on Draw Something Draw Something is a mobile app developed by Omgpop. It was one of the Mobile apps which won the Flurry App Spotlight Awards in 2012. In the first five weeks after its launching, the game was downloaded 20 million times. BanksyInside - A Digital Magazine Dropping What's Fresh on the Web The mysterious Banksy just released some new paintings on his website. You heard it right, Banksy painted on a canvas. All Banksy fans will appreciate. Here are a few of my favourites. Why Rudolph’s nose is red: observational study Can Ince, professor1, Anne-Marije van Kuijen, PhD candidate2, Dan M J Milstein, postdoctoral research fellow3, Koray Yürük, PhD candidate3, Lars P Folkow, professor4, Wytske J Fokkens, professor2, Arnoldus S Blix, professor4 Author Affiliations Correspondence to: C Ince c.ince@erasmusmc.nlAccepted 12 November 2012

The Gospel of Supply Side Jesus - A BuzzFlash Guest Contribution Former Wall Street Goldman Sachs executive Nomi Prins is back with a thoroughly documented historical account of how DC and financial barons are locked at the hip. Accessible and compelling: Buy directly from Truthout by clicking here. Modern Drunkard Magazine 1. If you owe someone money, always pay them back in a bar. Preferably during happy hour. 2. Rashad Alakbarov Paints with Shadows and Light Artist Rashad Alakbarov from Azerbaijan uses suspended translucent objects and other found materials to create light and shadow paintings on walls. The best part is that you can easily create something similar at home – all you need is one or two lamps and some items from your desk. The stunning light painting below, made with an array of colored airplanes has found its way to exhibitions like the Fly to Baku at De Pury Gallery in London. Rashad adds, “Above the cloud with its shadow is the star with its light. Above all things reverence thyself.” Comments

AMS Design Blog: Product Spotlight : Knock Knock Stationery I first saw a knock knock product in the shop at the Saatchi gallery here in London and it was love at first site. Self proclaimed as putting the fun in functional, their products are totally useless but incredibly amusing and make for great gifts. Check out their website here.