OriDomi - origami for the web 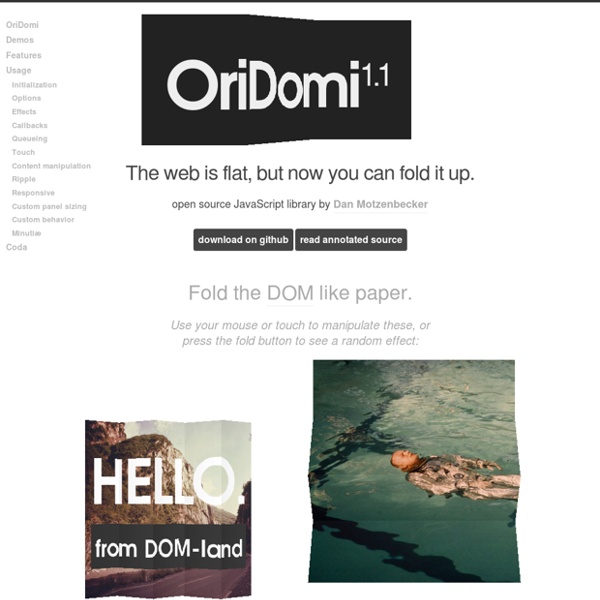 Selectize.js Current Value: "awesome,neat" Add and remove items in any order without touching your mouse. Use your left/right arrow keys to move the caret (ibeam) between items. This example is instantiated from a <input type="text"> element (note that the value is represented as a string). Current Value: null This demonstrates two main things: (1) custom item and option rendering, and (2) item creation on-the-fly. The most vanilla of examples. Selectize supports <optgroup> rendering (as of v0.5.0). Current Value: ["CA","WY"] This example only allows 3 items. Current Value: "" A good example of (1) support for international characters (diacritics) and (2) how items are scored and sorted. $('#select-country').selectize(); Current Value: " This demo shows how to integrate third-party data from the GitHub API. This demo shows how to integrate third-party data from the Rotten Tomatoes API. Current Value: "web development,design" drag these items around with your mouse

Test Double | Our Thinking | The Failures of "Intro to TDD" I'm now halfway through teaching a two-week crash course on "agile development stuff" to a team of very traditional enterprise Java developers. Condensing fifteen years of our community's progress into 8 half-day workshops has presented an obvious challenge: given the clear time constraints, what set of ideas and practices could conceivably have the biggest positive impact on these developers' professional lives? After a few days of fits and starts, I've come to at least one realization: test-driven development ("TDD") as it's traditionally introduced to beginners is officially off my list. The problems with how TDD is typically introduced are fundamental, because they put the learner on a path that leads to a destination which might resemble where they want to go, but doesn't actually show them the way to the promised destination itself. This sort of phenomenon happens often enough that I've decided to finally settle on a name: "WTF now, guys?" Teaching "classic TDD" with code katas.

CSS Tools: Reset CSS The goal of a reset stylesheet is to reduce browser inconsistencies in things like default line heights, margins and font sizes of headings, and so on. The general reasoning behind this was discussed in a May 2007 post, if you're interested. Reset styles quite often appear in CSS frameworks, and the original "meyerweb reset" found its way into Blueprint, among others. The reset styles given here are intentionally very generic. There isn't any default color or background set for the body element, for example. In other words, this is a starting point, not a self-contained black box of no-touchiness. If you want to use my reset styles, then feel free! Previous Versions v1.0 (200802) Acknowledgments Thanks to Paul Chaplin for the blockquote / q rules.

jQuery Transit - CSS3 animations for jQuery What about older browsers? Transit degrades older browsers by simply not doing the transformations (rotate, scale, etc) while still doing standard CSS (opacity, marginLeft, etc) without any animation. Delays and durations will be ignored. // Delegate .transition() calls to .animate()// if the browser can't do CSS transitions.if (!$.support.transition) $.fn.transition = $.fn.animate; Fallback to frame-based animation If you would like to fallback to classic animation when transitions aren't supported, just manually redefine .transitition to .animate. (Note: if you're using custom easing, you may need to also use jQuery Easing, and restrict your use of easing options to the ones defined there.) $.fx.speeds. Default duration Transit honors jQuery's default speed, $.fx.speeds. Custom easing Define custom easing aliases in $.cssEase. Webkit: prevent flickers Having flickering problems in Webkit? Antialias problems in Webkit? Force hardware-acceleration in Webkits to prevent text flickering.

auduno/clmtrackr The Trac Project Powerful New CSS- and JavaScript-Techniques (2012 Edition) Advertisement Since our last round-up of useful CSS techniques1, we’ve seen a lot of truly remarkable CSS geekery out there. With CSS3, some of the older techniques now have become obsolete, others have established themselves as standards, and many techniques are still in the “crazy experimentation” stage. Since the release of the previous post, we’ve been collecting, sorting, filtering and preparing a compact overview of powerful new CSS techniques. Please note that many techniques are not only CSS-based, but also use HTML5 and JavaScript. Table of Contents CSS Transitions And Animations CSS transitions and animations are often used to make the user experience a bit more smooth and interesting, especially when it comes to interactive effects on hover or on click. Interactive CSS3 lighting effects7 An interesting effect to create interactive lighting effects with 3-D transforms, CSS gradients and masks; the cast shadow was created using box shadows and transforms. Visual Techniques with CSS

Magnific Popup: Responsive jQuery Lightbox Plugin Magnific Popup is a responsive lightbox & dialog script with focus on performance and providing best experience for user with any device(for jQuery or Zepto.js). Examples Single image lightbox Three simple popups with different scaling settings. 1 — fits horizontally and vertically, 2 — only horizontally, 3 — no gaps, zoom animation, close icon in top-right corner. Lightbox gallery You may put any HTML content in each gallery item and mix content types. Zoom-gallery If you wish to open the popup only after image is fully loaded, you may preload image via JS. Popup with video or map In this example lightboxes are automatically disabled on small screen size and default behavior of link is triggered. Dialog with CSS animation Animations are added with simple CSS transitions, you can make them look however you wish.More animation effects on CodePen. Popup with form Entered data is not lost if you open and close the popup or if you go to another page and then press back browser button. Ajax popup Fast

videoconverter.js - Convert Videos In Your Web Browser videoconverter.js is a program that lets you process videos in your browser. View a DemonstrationView a Sample Application or view code on github About [#] Videoconverter.js was originally conceived and implemented for a project in Node Knockout 2013 called Video Funhouse. The idea for the application was to try and convert any video file into another video format, while allowing filters to be applied to the video – all inside of the browser, without uploading anything. And to build it in a single weekend. This is a huge task, and we knew that existing libraries like FFmpeg would do a great job. Here is a video demonstrating the sample application we made with this library over the weekend: Why? Why would you compile FFmpeg into JavaScript? Who? Most of the grunt work has been done by @bgrins and @aaronm67. How Big is the JavaScript File? The ffmpeg.js file is around 24 MB or so. Should I Use This? Feel free to use this program, but keep in mind the following things: Pontential Uses [#]

Fine Uploader Live Demo and Javascript Code Examples Basic Setup Want to upload files to your own server? You need only to include a CSS file, a JavaScript file, and handle the uploads on the server side according to the technology you are using. There are absolutely no other dependencies. You can quickly set up an HTML page in order to use Fine Uploader: Download and unpack the latest version of Fine Uploader. Have a look at the following live demos for examples of common setups. Gallery View for Images In this demo, we're utilizing Fine Uploader 4's client-side image preview generation feature. This uploader is also restricted in allowed extensions (jpeg, jpg, gif, and png) This demo uses the default simple thumbnails template bundled with Fine Uploader UI. Note: File bytes are not actually being sent to the server for this demo due to limitations of the GitHub Pages server. Processing dropped files... No Dependencies jQuery Manually Trigger Uploads & Edit File Names Validation There are various options available to you when using Fine Uploader.