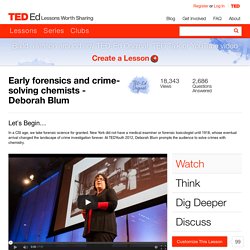 She writes about chemistry and culture at the Wired science blog, Elemental, and teaches journalism the University of Wisconsin-Madison. CSI: Crime Scene Investigation (referred to as CSI, also known as CSI: Las Vegas) is an American crime drama television series, that premiered on CBS on October 6, 2000. The show was created by Anthony E. Zuiker and produced by Jerry Bruckheimer. It is filmed primarily at Universal Studios in Universal City, California. Forensics is defined as the use of science and technology to investigate and establish facts in criminal or civil courts of law. MH17 crash: Dutch Safety Board animation 'shows path of missile' - BBC News. MH17 Ukraine disaster: Dutch Safety Board blames missile - BBC News. Malaysian Airlines Flight MH17 crashed as a result of a Russian-made Buk missile, the Dutch Safety Board says. 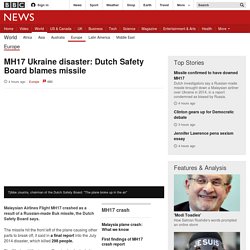 The missile hit the front left of the plane causing other parts to break off, it said in a final report into the July 2014 disaster, which killed 298 people. The West and Ukraine say Russian-backed rebels brought down the Boeing 777, but Russia blames Ukrainian forces. The report does not say who fired the missile, but says airspace over eastern Ukraine should have been closed.

The plane - flying from Amsterdam to Kuala Lumpur - crashed at the height of the conflict between government troops and pro-Russian separatists. Most of the victims were Dutch - 196, including some with dual nationality. Gas Chromatography GC. Create a DNA Fingerprint. Virtual Mass Spec. PCR Virtual Lab. Primers are short pieces of DNA that are made in a laboratory. 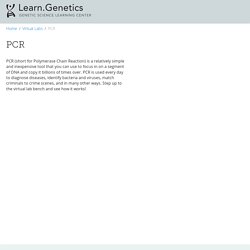 Since they're custom built, primers can have any sequence of nucleotides you'd like. In a PCR experiment, two primers are designed to match to the segment of DNA you want to copy. Through complementary base pairing, one primer attaches to the top strand at one end of your segment of interest, and the other primer attaches to the bottom strand at the other end. In most cases, 2 primers that are 20 or so nucleotides long will target just one place in the entire genome. Primers are also necessary because DNA polymerase can't attach at just any old place and start copying away. DNA Polymerase is a naturally occurring complex of proteins whose function is to copy a cell's DNA before it divides in two. Azaria Chamberlain. Gel Electrophoresis Virtual Lab. Bloodstain Pattern Analysis in Action: Chamberlain Case" In August 1980, the Chamberlain family was camping near a rock formation called Ayers Rock in Central Australia. 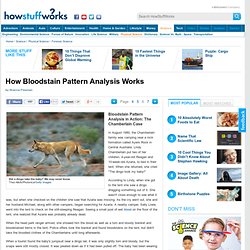 Lindy Chamberlain put two of her children, 4-year-old Reagan and 10-week-old Azaria, to bed in their tent. When she returned, she cried "The dingo took my baby! " According to Lindy, when she got to the tent she saw a dingo dragging something out of it. She wasn't close enough to see what it was, but when she checked on the children she saw that Azaria was missing. As the cry went out, she and her husband Michael, along with other campers, began searching for Azaria. Azaria Chamberlain case: Dingo DID take baby rules coroner. Mother served six years in jail for murdering tot who disappeared in the night during a camping trip to Ayers Rock in 1980She and her then husband had always maintained that a wild dog had snatched their childBaby's body was never found despite intensive searches by police, Aboriginal trackers and park rangersHer clothing was later found beside a dingo's lair at the base of the rockIncredible scenes as coroner fights back tears as she delivers the verdict at fourth inquest into the case By Richard Shears Published: 03:11 GMT, 12 June 2012 | Updated: 03:22 GMT, 13 June 2012 After more than three decades of bitter controversy, a coroner ruled yesterday that a dingo was responsible for the death of a baby in the Australian Outback. 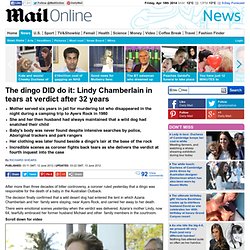 The decision finally confirmed that a wild desert dog had entered the tent in which Azaria Chamberlain and her family were staying, near Ayers Rock, and carried her away to her death. There were emotional scenes yesterday when the verdict was delivered. The Trial of Lindy and Michael Chamberlain: A Chronology. Azaria Chamberlain: archive coverage. An Australian coroner has made a final ruling that a dingo caused the death of Azaria Chamberlain in 1980. 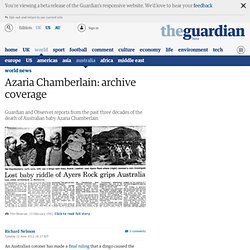 Read how the Guardian and the Observer have reported the case over the past three decades. On the night of 17 August 1980, nine-week-old Azaria vanished from her parents' tent at a campsite near Uluru (then called Ayers Rock) in central Australia. A few days later, Azaria's torn jumpsuit and clothes were found near the rock. In December 1980, an inquest found that a dingo had killed Azaria but someone unknown had later interfered with her clothes. A second inquest started on 14 December 1981, and in February the next year Azaria's mother, Lindy, was committed to trial for murder while her father, Michael, was charged as an accessory after the facts.