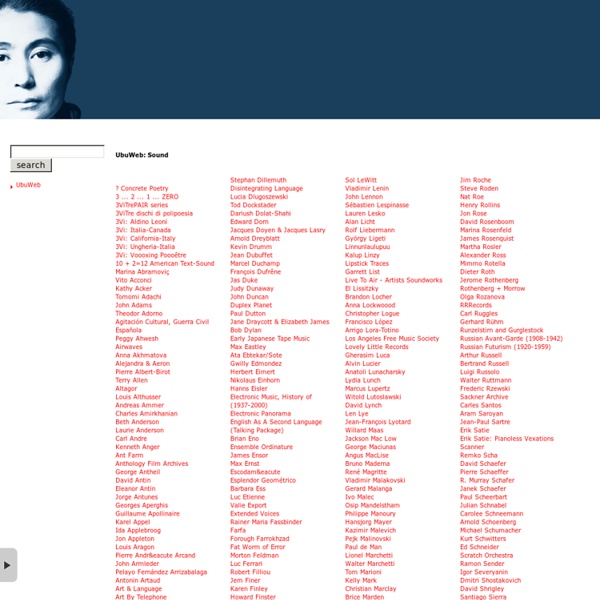 2016 in review: Journeys in Modern Classical From the delicate minimalism of a single piano to the aching beauty of a string ensemble to the mysterious studio alchemy of the analog fused with the electronic, this is a selection of some particularly memorable journeys in modern classical music I enjoyed throughout the year. Ben Lukas Boysen – Spells [Erased Tapes] Programmed piano pieces merged with live instruments and molded into a supremely elegant compositional framework so effectively and organically that Nils Frahm who mixed & mastered the record said, ““from now on, if anyone asks – this is a real piano”. Truth in advertising – this is a truly spellbinding record. Bruno Bavota – Out of the Blue [Sono Luminus]

Rush "Tom Sawyer" Isolated Guitar Track - Bobby Owsinski's Music Production Blog There is probably no other group that has as a fanatical a following as Rush. It seems like there’s no in-between with the band – you either love them or hate them, intensely. There’s no denying that Rush has had some huge hits though, and “Tom Sawyer” is one of their biggest. William Basinski's A Shadow In Time is the tribute David Bowie deserves Drone master William Basinski’s new album A Shadow In Time is dedicated to David Bowie. Miles Bowe examines the record and talks to Basinski about its influences and significance. “Some old rotten things that the cat in New York had chewed up.” That’s how William Basinski described the loops that form the backbone of his towering new album A Shadow In Time to FACT before its live debut last year.

Alan Lomax Archive The Sound Recordings catalog comprises over 17,400 digital audio files, beginning with Lomax’s first recordings onto (newly invented) tape in 1946 and tracing his career into the 1990s. In addition to a wide spectrum of musical performances from around the world, it includes stories, jokes, sermons, personal narratives, interviews conducted by Lomax and his associates, and unique ambient artifacts captured in transit from radio broadcasts, sometimes inadvertently, when Alan left the tape machine running. Not a single piece of recorded sound in Lomax’s audio archive has been omitted: meaning that microphone checks, partial performances, and false starts are also included. This material from Alan Lomax’s independent archive, begun in 1946, which has been digitized and preserved by the Association for Cultural Equity, is distinct from the thousands of earlier recordings on acetate and aluminum discs he made from 1933 to 1942 under the auspices of the Library of Congress.

Every Noise at Once italian progressive metal deep symphonic black metal christian symphonic metal brazilian classical piano native american spiritual indonesian alternative rock The 50 Best Full Albums Free Online The following list is of the most popular full albums available for free on youtube. Have you ever just needed something to put on while you do a task but couldn't think of what to listen to at the time? Try using this list to find the music you know and to experiment with the music you don't.

Music, Arts & Culture : Free Audio : Download & Streaming collection eye Listen to this collection of 78rpm records and cylinder recordings released in the early 20th century. These recordings were contributed to the Archive by users through the Open Source Audio collection. Artists available here include Ada Jones, Caruso, Eddie Cantor, Edison Concert Band, Harry MacDonough, Len Spencer, Paul Whiteman, and many others. by Other Minds Archive Synthescapes Collection by Ohni Starfall Cookie Policy We use cookies for various purposes including analytics and personalized marketing. By continuing to use the service, you agree to our use of cookies as described in the Cookie Policy. Learn more 0:04

100 Ways to Discover and Enjoy Music UPDATE 12/10/13: We’ve released a follow-up to this post with 100 More Ways to Discover and Enjoy Music. Prepare yourself for another dose of Monday roundup madness! It’s time for another crazily comprehensive, yet carefully curated, look at an entire industry–the music industry to be specific. This if the first in a two-part series on the music industry which will conclude next week. This week’s focus is on the consumer side of music. National Jukebox LOC.gov WARNING: Historical recordings may contain offensive language. Read the disclaimer Now Playing... Elk's reunion march Le parlate d'amor El teléfono a larga distancia At the jazz band ball Everybody's jazzin' it Pack up your troubles in your old kit bag and smile, smile, smile! View This Playlist 1919 Victrola Book of the Opera