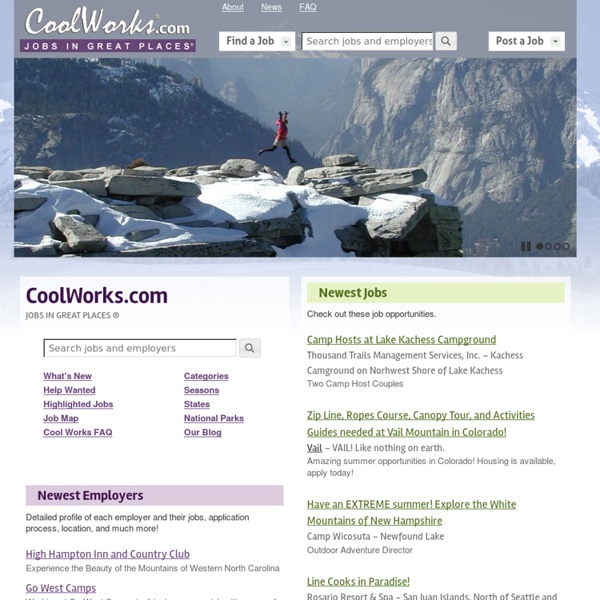 France - WWOOF World Wide Opportunities on Organic Farms (France) Welcome to the WWOOF France website! You would like to discover France in an other way? Experience and learn about life on organic farms, meet French families and share their passion? With WWOOF, plunge in to the heart of an adventure full of human values and ecology on a background of organic farming and organic flavor. WWOOF is a unique experience that you will never forget.

Summer Jobs+ "America’s young people face record unemployment, and we need to do everything we can to make sure they’ve got the opportunity to earn the skills and a work ethic that come with a job. It’s important for their future, and for America’s.” –President Obama President Obama issued a challenge to businesses, non-profits, and government: Work together to provide pathways to employment for low-income and disconnected youth. Building off the 2012 Summer Jobs+ program, President Obama has announced Youth Jobs+ that will bring together elected officials, local businesses, non-profit organizations and faith institutions to create pathways to employment for young Americans. Connect with participating job posting websites to find jobs, internships and other employment opportunities in your area:

Common Careers for Personality Types Research has shown that many of the different Personality Types tend to have distinct preferences in their choice of careers. We have incorporated observations of each type's character traits which affect career choice along with some suggestions for possible directions. We have also included lists of actual careers which the various types have chosen in their lives. This material is provided for your reference, and is intended to be an informational guide. It does not comprise a complete analysis of ideal careers for individuals, and does not guarantee success or failure at any occupation. As we know, individuals vary greatly.

What Alt-Right Activists Can Do When Doxed By The Politically Correct Left — Foundation for the Marketplace of Ideas Aristotle observed two millennia ago in his Politics that “Every state is a community of some kind, and every community is established with a view to some good; for mankind always act in order to obtain that which they think good.” The prolific twentieth century writer Hilaire Belloc echoed similar sentiment in his The Crisis of Civilization: “The prime factor of unity in any society, large or small, is for all the members of that society to hold the same philosophy, to put human affairs in the same order of important, and to be agreed on the prime matters of right and wrong and of public worship.” The late Harvard professor and international relations scholar Samuel Huntington observed in his book—Who Are We?

Hotel Iroquois Jobs: Hotel Iroquois Mackinac Island Michigan MI area lake strait Huron hospitality careers employment opportunities Hotel Iroquois is a small deluxe hotel and fine dining restaurant on northern Michigan's Mackinac Island. Hotel Iroquois enjoys an ideal location on Mackinac Island, overlooking the beautiful Straits of Mackinac. Awarded 1997 and 2000 Condé Nast Traveler's Gold List recognition, the hotel ranks among the best hotels in the world. Hotel Iroquois recently celebrated its 100th year. The Carriage House dining room serves breakfast, lunch and dinner overlooking the Great Lakes Huron and Michigan as well as the Mackinac Island marine harbor. Welcome to Personality Type! Below are four questions, and descriptions of two different lists of personality "preferences." Both lists have their own strengths and blindspots. BOTH are equally valuable -- NEITHER one is better or worse than the other. Read both sets of descriptions for Question #1 and decide which list -- as a whole - describes you better (even if just a little better). Then click the appropriate button.

New College Professor 'Watchlist' Aims To Expose Professors Who 'Advance Leftist Propaganda' A new website is asking students and others to “expose and document” professors who “discriminate against conservative students, promote anti-American values and advance leftist propaganda in the classroom.” The site, called Professor Watchlist, is not without precedent -- predecessors include the now-defunct NoIndoctrination.org, which logged accounts of alleged bias in the classroom. There's also David Horowitz's 2006 book, The Professors: The 101 Most Dangerous Academics in America. But such efforts arguably have new meaning in an era of talk about registering certain social groups and concerns about free speech. At the same time, the new list has attracted Twitter jokesters under the hashtag #trollprofwatchlist, with complaints about Indiana Jones, Professor Plum of "Clue University," and Gilderoy Lockhart from Harry Potter's Hogwarts School of Witchcraft and Wizardry, among others. Professor Watchlist, launched Monday, is a project of Turning Point USA.