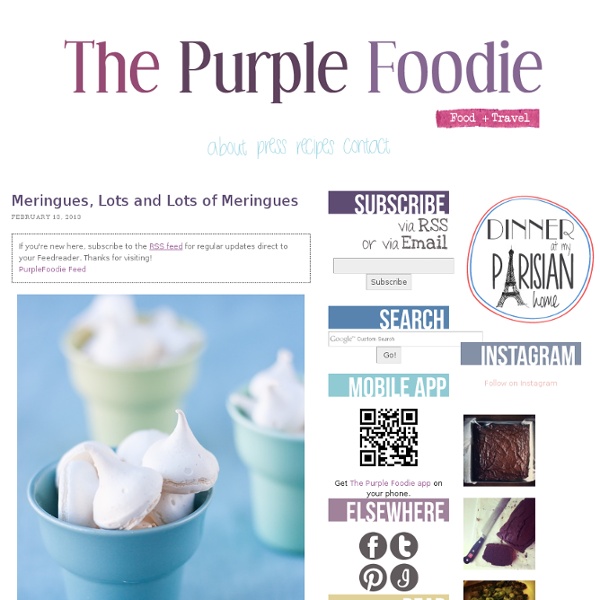 Read10 Commandments of Pierre Herme (French) Cooking Family-Style With Chef Greg Marchand The 15 Year Old Chef How Iñaki Aizpitarte Does Lunch at Home - his restaurant, Le Chateaubriand, is where I’ve had one of my most memorable meals in Paris. I remember when I walked out of the restaurant, and thanked him for the meal, he came across as someone so friendly, so unassuming quite unlike his badass rockstar looks. “Merci, à bientôt!”

Oven-Roasted Tomatoes Someone around here jumped the gun here on early harvested tomatoes and I came home the other day and found a bowl of les tomates Campari in a little paper sack, in the kitchen. Since they weren’t as nice and softened as a full-on ripe tomato should be, instead of eating them on their own, I oven-roasted them, which is a great way to coax out flavor from less-than-pristine tomatoes. This is the perfect technique for both concentrating flavor and preserving tomatoes, something I also do at the end of the season. Then I freeze them in portions to use for a quick pasta or lasagna sauce in the fall and winter. Because fresh tomatoes come from plants, and aren’t standardized (or at least they shouldn’t be) – moisture, ripeness, and variety are some of the various factors that come in to play – so the roasting time may vary. It’s kind of hard to overcook them, but do check them as they’re roasting every once in a while to monitor their progress.

sophistimom all natural red velvet brownies You know the expression, “beat a dead horse?” I’d say it’s probably time I moved on from the all-natural red velvet cake thing, but a lot of you keep asking for brownies, so read on, my friends, and I’ll give you my recipe. But first, I want to turn your attention to the sidebar. Recipes from Kevin & Amanda This post is in partnership with French’s Sweet Yellow Mustard and Spicy Yellow Mustard. I received compensation to write this post through the Sweet and Spicy Influencer Program. All content, photos, and opinions are my own. Thank you for supporting sponsors that allow me to create new content for Kevin & Amanda! Today I’m partnering with French’s Mustard to bring you this fabulous Honey Garlic Shrimp. Ani Phyo: Eco-Lifestylist & Raw Food Diet It was Kanga’s 8th ‘birthday’ and also our anniversary on Labor Day. Each year, I make my darling pooch a heart shaped cake (you may have seen the photo from last year’s birthday on page 301 of Ani’s Raw Food Essentials). This year, the cake was made with sunflower seeds and a few Medjool dates. Kanga was so eager to eat it, she got green birthday candle wax on the tip of her nose….so cute!

Joy the Baker — I feel like I’m grasping tight to the things around me these days. I’m probably the first to shrug off the change of season, the change of moving cities, and the change of traveling a ton as no big deal…. but it all adds up to matter and I have to admit I feel a little crazy in the brain. This season I’ve started a new workout routine. Since I’ve moved away from my beloved SoulCycle in California, I’ve started practicing Bikram Yoga in New Orleans. I’m terrible. Basic Meals—Just Add Water A simple zucchini soup. Photo by Donna Turner Ruhlman. Last week I wrote about our first meal in Italy with the Motturas—the fineness of the meal and the pleasures of sitting down to many courses.

20 brilliant things to make in a jar Via: mycakies.blogspot.com Start saving your old jam jars! From cakes to herb gardens, pies to photo frames, and even entire meals … here are 20 fantastic things you never knew you could make with a jar. Regrowing Green Onions In Your Kitchen Green onions are one of my favorite ingredients to add to many kinds of recipes, but I find it frustrating to have fresh onions when I need them, but not waste half of the package. Here are two great tricks to ensure that you always have green onions in your kitchen any time you need them. Although I love the taste and flavor green onions added to meals they are sometimes a frustrating addition. It seems like when you do add them to a recipe you need so little, that you end up wasting the rest or if you really need them, you don’t have them or they have already gone bad in the refrigerator.

Tarragon Corn Chowder Recipe Prep the onions, fennel and potatoes while you are cooking the corn or making the corn broth. 1 If you are starting with fresh corn-on-the-cob (versus frozen), you can either cook the corn first, or not. We grill the corn first to get the extra flavor from the corn. spinach cheese empanadas recipe Recipe: spinach cheese empanadas A lot of our time seems to revolve around friends and food of late. I guess that’s no surprise, but it hops onto an accelerated pace in summer when the weather is nice and we don’t have to worry about insane winds scaring our dinner guests off or snow and ice closing the canyon. Game on! On Sunday, Trent (who owns Pica’s in Boulder), his family, and a mutual friend came up to escape the heat and enjoy some burgers.

Roasted Red Peppers Roasted red peppers have to be one of my favorite foods and right now the farmers market is filled with perfectly field ripened red peppers that are just waiting to be roasted. Roasting the red peppers makes them nice and tender and it intensifies their flavour and sweetness along with imparting them with a touch of smokiness. Although you could easily buy jarred roasted red peppers, they are so easy to make at home and always good!

Baking Ingredients and Substitutions Because the question comes up from time to time, I thought I’d answer some questions about making substitutions in my recipes, and swapping out or deleting ingredients. The short answer is: Ingredients are added to recipes for a specific purpose and there is a reason that they are there. When you substitute or swap out ingredients, results will vary and won’t be the same as mine. Some may work, and others won’t. And I can’t comment on results unless I’ve tried it myself. The most common request is folks who want to reduce the sugar or fat in a recipe, but in most instances, people are not happy with the final results.