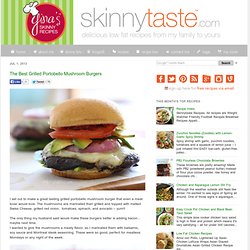 The mushrooms are marinated then grilled and topped with melted Swiss Cheese, grilled red onion, tomatoes, spinach, and avocado – yum!! The only thing my husband said would make these burgers better is adding bacon... maybe next time. I wanted to give the mushrooms a meaty flavor, so I marinated them with balsamic, soy sauce and Montreal steak seasoning. These were so good, perfect for meatless Mondays or any night of the week. 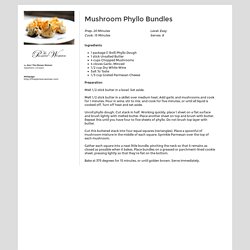 Set aside. Marinated and Grilled Portobello Mushrooms Recipe. Beer Battered Oyster Mushrooms. Scrambled Eggs with Goat Cheese and Shiitake Mushrooms Recipe -Laura Chenel. Mushroom Red Wine Reduction Hot Sauce. Even though this was the first attempt at making this Hot Sauce it has to be said this Mushroom Red Wine Reduction Hot Sauce has by far the deepest complex taste of any Hot Sauces I’ve created so far. 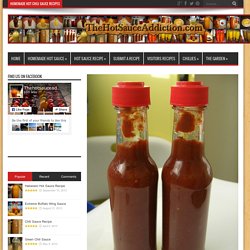 Special Note: This sauces tends to get a sharp kick as it ages, which might possibly be the red wine. It’s still a lovely sauce but stick to making no more than the volume listed or even half the amounts listed in the recipe if you don’t eat much Hot Sauce. Unlike a lot of the Hot Sauces I make the recipe was formed without the emphasis on the taste of the chili pepper but instead I wanted to make a hot sauce to go with a steak but I wanted to impart hints of some complementing flavors like Shiitake mushroom, Thyme, Cracked Pepper and worcestershire sauce. Gooseberry mooseberry: Sauteed Maitake (Hen-of-the-Woods) Mushrooms. From the various farmers' markets I've been to, it seems most, if not all, have at least one stand with a mushroom guy (or gal). 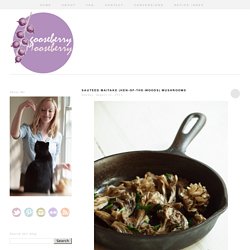 The stand is usually less crowded than the others, and there are only a few mushrooms on display, majority of the stock remaining hidden from the harsh daylight. While there is the inevitably ordinary stock of crimini, portobello, and various oyster mushrooms in small baskets, there are usually a few weird ones as well. The sellers I've talked to seem extremely knowledgeable about their fare, somewhat nerdy, and usually ready to strike up a long conversation about mushroom farming, how to cook them, and everything else.

Candy Cap Mushroom Sponge Candy. I’m always up for a cooking contest, especially if it challenges me to work with an ingredient that is unfamiliar to me. 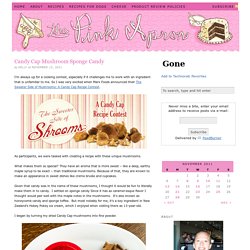 So I was very excited when Marx Foods announced their The Sweeter Side of Mushrooms: A Candy Cap Recipe Contest. As participants, we were tasked with creating a recipe with these unique mushrooms. What makes them so special? They have an aroma that is more sweet – like a deep, earthy maple syrup to be exact – than traditional mushrooms. Because of that, they are known to make an appearance in sweet dishes like creme brulée and cupcakes. Given that candy was in the name of these mushrooms, I thought it would be fun to literally make them in to candy. Jerusalem Mix of Mushrooms - Tekoa Farms. Hokto Kinoko - Recipe Talk » Blog.

Food Safety & Hokto Mushrooms Posted on September 28th, 2010 America’s food supply is among the safest in the world, yet the recent salmonella outbreak in eggs has some people wondering about what is safe to eat and what to do to avoid food-borne illness. 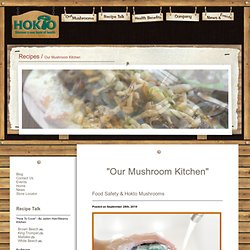 Today’s blog takes a look at foods with the lowest risk and includes tips on how to handle and prepare food to keep contamination at an all time low. Stir Fry Beef w/ black fungus. Stir-Fry Black Fungus With Chinese Cabbage (Bok Choy) at Chinese Food Health gives you the basic approaches on how to nourish and preserve health in the perspective of Traditional Chinese Medicine. Stir-Fry Chayote with Fresh Black Fungus ~ Teczcape-An Escape to Food. There are many ways to cook Chayote. 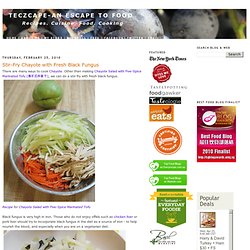 Other than making Chayote Salad with Five-Spice Marinated Tofu (佛手瓜拌香干), we can do a stir-fry with fresh black fungus. Recipe for Chayote Salad with Five-Spice Marinated Tofu Black fungus is very high in iron. Those who do not enjoy offals such as chicken liver or pork liver should try to incorporate black fungus in the diet as a source of iron - to help nourish the blood, and especially when you are on a vegetarian diet. Stir-Fry Chayote with Fresh Black FungusIngredients: Chayote, peeled and thinly sliced; fresh black fungus, rinsed and sliced; salt and white pepper to taste, drizzle of sesame oil, 2-3 slices of ginger Directions: Heat some oil in a pan. 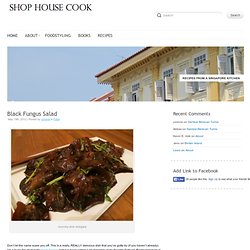 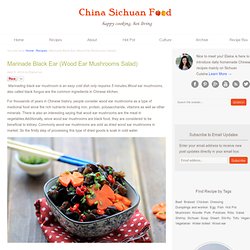 Sautéed Oyster Mushrooms Recipe. Diary of a Locavore: The Local Food Report: for boletes. The other day, Richard Bailey took me foraging for boletes. 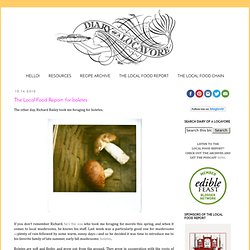 If you don't remember Richard, he's the one who took me foraging for morels this spring, and when it comes to local mushrooms, he knows his stuff. Last week was a particularly good one for mushrooms—plenty of rain followed by some warm, sunny days—and so he decided it was time to introduce me to his favorite family of late summer, early fall mushrooms: boletes.

Boletes are soft and fleshy, and grow out from the ground. They grow in cooperation with the roots of trees (mycorrhizal is the official word for the relationship), and are generally found in open forests of mixed oaks and pines. They are soft and fleshy, with a stalk, a cap, and a spongy bottom made up of layers of tubes underneath. The most common type, and the one Richard says tastes best, is golden brown—the color of a particularly vivid fallen oak leaf, or maybe a well-baked biscuit—on top. Of course, then you have to figure out how to eat your haul. Steak With Creamy Chanterelle Sauce Recipe. Chanterelle mushrooms. One of the most delectable of all mushrooms. It is described as having a fruity smell, similar to that of apricots, and a mildly peppery taste. Chanterelles have graced dinner plates as far back as the 1500’s, but it wasn’t until the 1700’s that they gained widespread recognition as a culinary delicacy in French cuisine.

During the 18th century they were most commonly eaten among nobility. Fortunately they are widely accessible today and are harvested and enjoyed throughout many countries. Chanterelle mushrooms twin beautifully with cream sauces. Though the chanterelle season has just passed, they can still be found in stores. Chanterelles are expensive, but they are very light and 6 oz. will give you all you need for this recipe. Vegetable Stir-Fry Recipe in 16 Minutes. Sauteed Wild Mushrooms Recipe : Ina Garten. Mushroom Cooking. Marinated Grilled Mushrooms. Kristen from Dine and Dish shares a recipe for Marinated Grilled Mushrooms that proves the most gourmet meal can be served right in your own home.

When my husband and I first graduated college and got our first jobs, we would live for pay day. Like most new grads, we didn’t have a lot of extra cash so going out to eat then was really special. Shimeji Mushrooms with Butter and Soy recipe on Food52.com. Author Notes: This is a recreation of a dish I ate at Chaya, a Japanese restaurant in Pittsburgh, PA. Its preparation and ingredients are utterly simple, but its flavor is complex and multilayered. Stealth Cooking: King Trumpet (Mushroom) Salad. I love, love, love mushrooms. Could eat them every day. King Oyster Mushroom "Calamari"