A Basic Sourdough Recipe. Photograph of my Sourdough, from my most recent book Food For Thought, taken by Laura Edwards reproduced with Kind permission from Kyle Books. 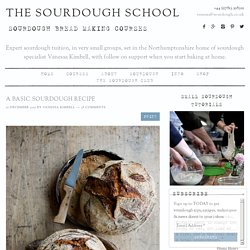 I am often asked for a basic sourdough recipe. I am in so many ways I am reluctant to give a recipe because a recipe in itself does not guarantee a good loaf. There are so many variables that affect a good sourdough bread, from the kind of flour, to the amount it is handled, to the weather on the day. These are things that I cannot account for in a recipe. Baking a beautiful loaf is about more than just the practical external factors. That said, nothing gets you off to a better start at the weekend that a warm crusty sourdough loaf fresh from the oven and there are many bakers who read this site too far away to attend a course. This loaf has an chewy elastic crumb and a proper crunchy, robust crust. Sourdough bread. Equipment: Makes 1 loaf Directions: Late afternoon Mix In a large bowl whisk your water and starter and mix well. 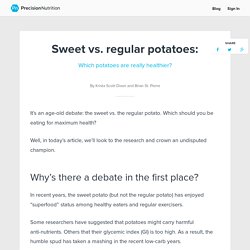 Which should you be eating for maximum health? Well, in today’s article, we’ll look to the research and crown an undisputed champion. Why’s there a debate in the first place? In recent years, the sweet potato (but not the regular potato) has enjoyed “superfood” status among healthy eaters and regular exercisers. Some researchers have suggested that potatoes might carry harmful anti-nutrients. But, here’s the thing. You can eat and enjoy both, regardless of your goals. With that in mind, let’s dig up the truth about our tuberous friends. You say potato, I say potahto. They’re both called “potatoes”. They’re both nutritious, energy-rich tubers and ancient, honored foods whose cultivation stretches back thousands of years. They both originated in Central and South America and have since spread throughout the world.

They both taste great and make a fine side dish. Is a gluten-free diet good for our health? Around 1 in 133 people in the US, or 1% of the population, have celiac disease - a more serious form of gluten intolerance. 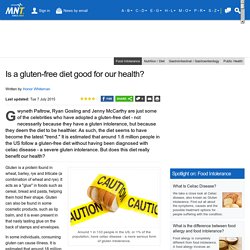 Gluten is a protein found in wheat, barley, rye and triticale (a combination of wheat and rye). It acts as a "glue" in foods such as cereal, bread and pasta, helping them hold their shape. Gluten can also be found in some cosmetic products, such as lip balm, and it is even present in that nasty tasting glue on the back of stamps and envelopes. In some individuals, consuming gluten can cause illness. It is estimated that around 18 million people in the US have some form of gluten intolerance - referred to as non-celiac gluten sensitivity (NCGS) - causing symptoms such as bloating or gas, diarrhea, fatigue, headache and itchy skin rash. Buckwheat Flour - HealthySupplies.co.uk. Buy Online. Nextday Catering Equipment & Refrigeration Supplies - 3kw 60cm Electric Griddle and Hotplate.

How to Grill Whole Fish. Grilling is one of the tastiest ways to cook a whole fish, and it's easy once you know a few tricks. 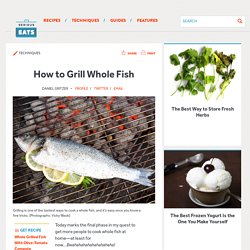 [Photographs: Vicky Wasik] Today marks the final phase in my quest to get more people to cook whole fish at home—at least for now...Bwahahahahahahahahaha! The beauty of cooking whole fish is that it's one of the easiest things to do in the world. It's also one of the best ways of guaranteeing you get a fresh fish, since the signs of freshness are much more apparent on a whole fish than they are on a fillet. Plus, it's usually cheaper, even after you've accounted for the weight of the bones and head. In terms of absolute ease, nothing beats roasting a whole fish: it's as simple as throwing it in the oven.

But I have to admit, grilling a whole fish is a little harder than roasting, mostly because if the fish sticks to the grill grate, things can get kinda messy. Do You Need a Fish-Grilling Gizmo or Not? The first question is whether to use one of those fish-grilling baskets or not. Yes!! Serve. How to Grill Fish Like You’re on a Greek Island. By Contributor Kerry Saretsky, French Revolution Always trust Greeks bearing fish… That is my greatest piece of vacation advice. 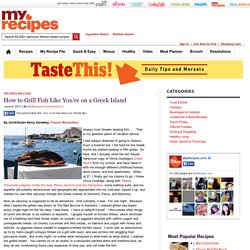 I had always dreamed of going to Greece. Such a bookish kid, I fell hard for the Greek myths we started reading in fifth grade. So hard, that I actually stole the old, frayed hardcover copy of Olivia Coolidge’s Greek Myths from my school, and have taken it with me through different childhood homes, dorm rooms, and first apartments. Food - Recipes from Programmes : Great British Food Revival.