A healthy meal in a box: great bento recipes, tips, and more. What The Fuck Should I Make For Dinner? What is a simple fact that completely changed your cooking? : AskCulinary. Adding hot sauce to mac & cheese makes it taste frickin' delicious. What other meals can you improve by adding a (few) simple ingredient(s)? : AskReddit. What is one meal you think everyone should know how to cook? : AskReddit. Detox smoothies. How to spice up bottled spaghetti sauce? - Ask Recipe Labs. The Italians eat the pasta as a first or second course (after soup or an appetiser), then serve the meat as a separate course afterwards, with a vegetable garnish. 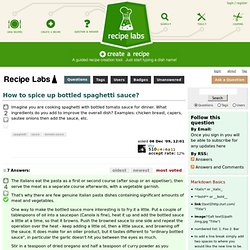 That's why there are few genuine Italian pasta dishes containing significant amounts of meat and vegetables. One way to make the bottled sauce more interesting is to fry it a little. Put a couple of tablespoons of oil into a saucepan (Canola is fine), heat it up and add the bottled sauce a little at a time, so that it browns. Push the browned sauce to one side and repeat the operation over the heat - keep adding a little oil, then a little sauce, and browning off the sauce. It does make for an oilier product, but it tastes different to "ordinary bottled sauce", in particular the garlic doesn't hit you between the eyes as much.

Stir in a teaspoon of dried oregano and half a teaspoon of curry powder as you prepare the sauce to get something that will approximate to home-made sauce for most people. Street Food, Epi 1.1 China - Bundle of Awesome (Jian Bing Guo Zi) How To Chop An Onion. How do I learn to learn how to cook? How did you start cooking and teach yourself to cook? There's so much information and so many recipes available, but I don't know where to start. : cookingforbeginners.

How to cook vegetables - Cook Smarts. Learn how to easily and efficiently prep fruits, veggies, and fresh herbs, so that you can cook simpler and smarter and eat healthy. 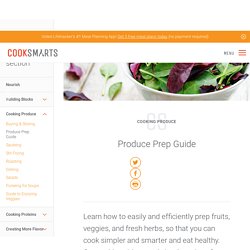 Our cooking videos and simple recipes focus on improving your cooking knowledge, and they make it easy for you to prep your favorite produce. OBT - S.3/E.2 - Root Vegetable Scramble. 10 Simple Tips to Make Food Taste Better. The test kitchen team spent more than a year rebuilding our classic landmark family cookbook from the ground up, continuing its quest to create the absolute best versions of recipes everyone counts on. 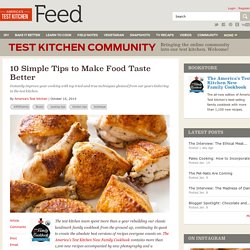 The America’s Test Kitchen New Family Cookbook contains more than 1,100 new recipes accompanied by new photography and a brand-new package. The result is a comprehensive but approachable tome that every cook will want in the kitchen, for many years to come. Sometimes it’s the small touches that make the biggest difference. Here are some simple tips for prepping, cooking, and seasoning that are designed to boost flavor in everyday cooking. Because after over 20 years of testing recipes, we’ve learned a thing or two. 1. Chopping garlic and onions releases sharp odors and strong flavors that become overpowering with time, so it’s best to cut them at the last minute. 2. 3. The fats in butter, oils, and nuts can go rancid and impart off-flavors to your cooking. 4. 5. 6. 7. 8. 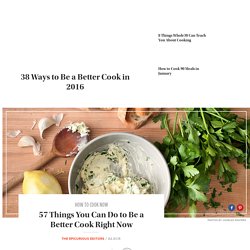 Buy an instant-read digital meat thermometer. The quickest way to ruin a perfectly marbled $25 steak? Cutting into it to figure out if it’s medium rare. Yes, the Thermapen is $95, but four steaks later, you’ve broken even. Budget Bytes - My stomach is full and my wallet is too. How to Cook: The Definitive Guide for Beginners. 26 Foods You Should Learn To Cook In Your Twenties. 33 Genius Three-Ingredient Recipes. Holy trinity (cuisine) The holy trinity, Cajun holy trinity, or holy trinity of Cajun cooking are onions, bell peppers and celery, the base for much of the cooking in the regional cuisines of Louisiana. 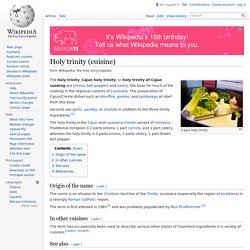 The preparation of Cajun/Creole dishes such as étouffée, gumbo, and jambalaya all start from this base. Variants use garlic, parsley, or shallots in addition to the three trinity ingredients.[1] The name is an allusion to the Christian doctrine of the Trinity: Louisiana (especially the region of Acadiana) is a strongly Roman Catholic region. The term is first attested in 1981[2] and was probably popularized by Paul Prudhomme.[3] The term has occasionally been used to describe various other triples of important ingredients in a variety of cuisines.

FAQ - Cook With Reddit Wiki - Wikia. Food Wishes. Stocking a pantry based on the Trinity method : food. About 500 favorite reddit recipes collected by hundreds of redditors : Cooking. 31 Important Mental Health Tips You Should Try Right Now. Stephen Hawking Has Some Beautiful Advice For People Who Suffer From Depression. World-renowned scientist Stephen Hawking is known for providing us with complex yet invaluable insights into space, time, and the nitty-gritty of theoretical physics. 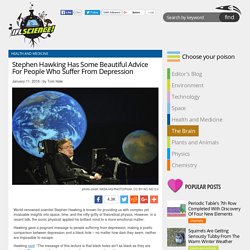 However, in a recent talk, the iconic physicist applied his brilliant mind to a more emotional matter. Hawking gave a poignant message to people suffering from depression, making a poetic comparison between depression and a black hole – no matter how dark they seem, neither are impossible to escape. Hawking said: “The message of this lecture is that black holes ain't as black as they are painted. They are not the eternal prisons they were once thought. “Things can get out of a black hole both on the outside and possibly to another universe. He gave the speech in front of a crowd of over 400 people on Thursday evening, January 7, as part of the Reith lecture at the Royal Institute in London. Gordon Ramsay's Ultimate Cookery Course S01E01 Getting Started.

Adding hot sauce to mac & cheese makes it taste frickin' delicious. What other meals can you improve by adding a (few) simple ingredient(s)? : AskReddit.