Ingredients. More recipes. BBC iPlayer - Rick Stein's India: Episode 1. Mary Berry recipes. Food - Recipes from Programmes : The Great British Bake Off. BBC iPlayer - Hairy Bikers' Best of British: Series 1 - 45 minute versions: Pies. How to make the perfect fish and chips at home - MSN Food. National Fish & Chip Awards The National Fish & Chip Awards announced Britain's best chippy last month, but if you can't get to a chippy, how do you rustle up your own perfect fish and chips at home? 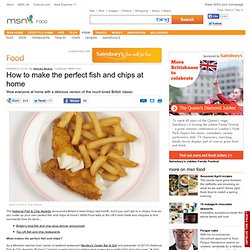 MSN Food talks to the UK's best chefs and chippies to find out exactly how it's done... What makes the perfect fish and chips? As a Michelin-starred chef, owner of seafood restaurant Bentley's Oyster Bar & Grill and presenter of 2012's National Fish & Chip Awards, Richard Corrigan is well placed to define what makes for a perfect fish and chip meal.

"A light, elegant batter and fantastic chips," he says, "by fantastic chips I mean to say chips that celebrate the potato they are. Food - Recipes from Programmes : Saturday Kitchen. Sri Lanka Foods. Just another WordPress.com weblog. Palakkad Chamayal: Tomato Rasam using Homemade Rasa Podi. A simple rasam, rice and potato fry is a heavenly combination, best for one of those cold nights. 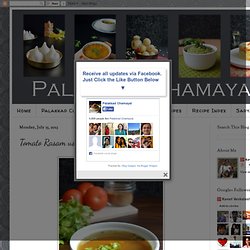 Rasam is a staple in most south Indian homes and so is the case in our home as well. My younger daughter loves rasam and she has it with almost everything, Idly, Dosa, even Chapathi. She loves to drink it as such, like a soup. Homemade Kitchen King Masala Powder Recipe ~ Indian Khana. Kitchen King Masala is one of my favorite masala powder and it's used in many North Indian recipes. 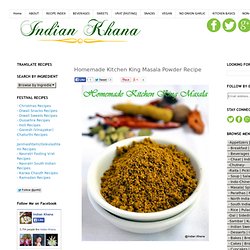 Recipes with Curds. Curds Viewed 26947 times Also Known asYoghurt, Dahi DescriptionCurd has a special place on the plate and palate of India. 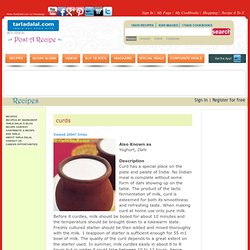 No Indian meal is complete without some form of dahi showing up on the table. The product of the lactic fermentation of milk, curd is esteemed for both its smoothness and refreshing taste. Jeyashri's Kitchen: OATS IDLI RECIPE. I have been thinking for a long time to post some diet recipes for a long time but somehow it got postponed but after getting many request from readers to post some diet recipes without any delay i thought i should post some Indian vegetarian diet recipes using the ingredients easily available at home. 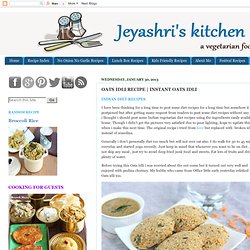 Though i didn’t get the pictures very satisfied due to poor lighting, hope to update this soon when i make this next time. The original recipe i tried from here but replaced with broken wheat instead of semolina. Instant Oats Idli. Idli. History[edit] Preparation[edit] Idli batter is poured into the round indentations of the idli pans (pictured) and placed into a pressure cooker. 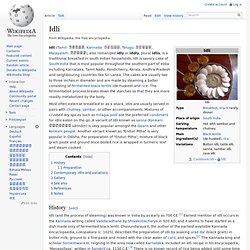 To make idli, place four parts uncooked rice to one part split black lentil (minapa pappu, urad dal) in a pan and soak separately for at least four hours. Optionally, to improve taste, add half a teaspoon of fenugreek seeds to the lentils at the time of soaking. Grind the lentils (with the fenugreek seeds) to a fine paste attaining the consistency of whipped cream. Idli Recipe, How to make Soft Idlis at home (Step by Step Photos)

This very popular idli recipe post has a lot of tips on making idli batter and step by step photos for making soft idlis at home. so take your time to read this detailed guide on making soft idlis at home and enjoy the pics after a lot of requests, i am finally writing a detailed post on how to make fluffy and soft idlis at home…. i don’t know what took me so long to write a post on idli…. it is something i make home regularly. idlis…. one food that i grew up having…. idli was a regular breakfast at our home. come sunday, and there would be idlis & dosas for breakfast as well as lunch. i would see the way my mom would soak the rice, dal and then grind it and then leave it to ferment. this was a regular saturday ritual in my house and i knew that on sunday we would get steaming hot idlis with chutney for breakfast. for lunch it would be dosa with sambar and a veggie. 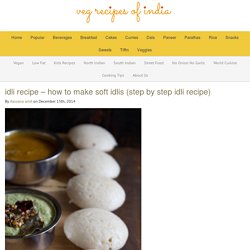 Chettinad Chicken Gravy ~ My Kitchen Experiments. I started to cook egg, chicken and seafood recipes only few months back. 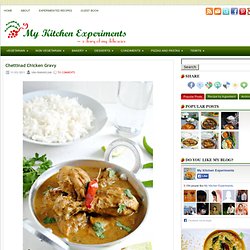 Till now, I feel it is a challenging job and I am posting each recipe based on the husband's feedback. He is the one who guides me to prepare this or that when it comes to non-veg food. A month ago, he asked me to prepare a chicken gravy in chettinad style, I enquired few of my friends and some cook books. VEGGIES PARADISE: RECIPE-INDEX. Nithu's Kitchen. Indian Food Recipes, Indian Cooking, Videos, Recepies, Indian Food. Spicy Andhra Chicken Curry ~ My Kitchen Experiments. "I love Curry" It is a book by Anjum Anand in which I tried all her recipes except few non-vegetarian recipes.I liked all of them and here comes my next entry after the Paneer Bruschetta from her book. 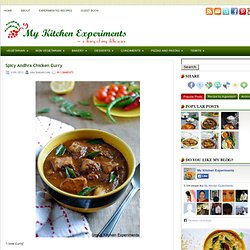 It has now become as one of the most wanted gravies by my family members. How to make Malaysian Roti Canai Recipe. The one thing that I consistently repeat and believe in is that the Language of Food is universal. 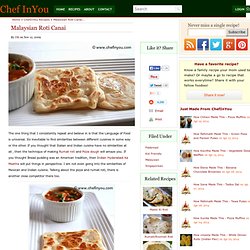 Its inevitable to find similarities between different cuisines in some way or the other. If you thought that Italian and Indian cuisine have no similarities at all , then the technique of making Rumali roti and Pizza dough will amaze you. If you thought Bread pudding was an American tradition, then Indian Hyderabadi Ka Meetha will put things in perspective. I am not even going into the similarities of Mexican and Indian cuisine. Talking about the pizza and rumali roti, there is another close competitor there too. The Malaysian, the Singaporean, Indian and the Austrian share the "stretching" the dough technique by way of their Roti Canai, Roti Prata, Kerala Parotta and Apple Strudel respectively. I am going to show 3 methods of making this Malaysian delicacy. All of them make amazingly flaky flatbread and is delicious.

Lachha paratha ( Multi layered Indian flat bread ) recipe. Roti, Chapati (Flat Indian Bread. Roti also known as Chapati or Fulka, is Indian flat bread made with whole wheat flour. In North India, roti is part of the main meal. Roti is served with a variety of cooked vegetables, lentils, and yogurt. Makes 4 Rotis. How to make the perfect onion bhajis. The onion bhaji was probably my first introduction to the joys of Indian food back in the late 80s, so I feel I owe this simple snack a considerable debt of thanks.

The word "bhajia" means fritter – in fact, they're just one small part of the wider pakora family, which encompasses all manner of good things (goat brain pakora stands out in my memory) fried in chickpea batter, but in Britain, a land never known for its subtle taste, the pungent onion variety rules supreme. Usually served as a snack in its homeland, generally with a nice cup of chai, bhajis are the stalwart of the starter selection here: a deep-fried appetite whetter for the myriad joys to come. List of Malaysian dishes. Char siu. Char siu (Chinese: 叉燒 caa1 siu1, literally "fork-roast"; also Romanised chasu, cha siu, cha shao, char siew) is a popular way to flavor and prepare barbecued pork in Cantonese cuisine.[1] It is classified as a type of siu mei (燒味), Cantonese roasted meat.

Meat cuts[edit] Chinese Baked Barbecued Pork Buns Recipe. If you are familiar with dim sum, you may know how delicious Chinese pork buns are. Pork buns can be steamed or baked. Char Siu (Chinese BBQ Pork) Food Endeavours of the Blue Apocalypse: Char Siu (Chinese Barbecue Pork) BBQ Pork Recipe. HONEY ROAST PORK (CHAR SIU) There are days when the easiest thing to do is to cook something in the oven because you can simply put it in and get on with the other things you have to do. My Mother-In-Law’s Yummy Chicken & Potato Curry (Malaysian Chinese Style) Good evening, dear friends :D I learned how to cook the Chinese version of Chicken & Potato Curry from my late mother-in-law more than 20 years ago. Shannen_goh: Cake, Bread and Malaysian-Chinese Cooking Recipes. Malaysian Recipes collection. Simple Malay Food Recipes ~ Singapore Food. Malaysian Fried Hokkien Noodles Recipe.

Best Delicacies in Malaysia In Malaysia, you can find the cheapest and best delicacies in hawker stalls and food court. Some patrons may not be able to accept the filthy environment especially roadside hawker stalls and open air food court but you can have full assurance that these low profile chefs provide the best hawker cuisine with superb culinary skills. Rasa Malaysia: Easy Asian Recipes - Page 2. Beef Rendang. Free Recipes from Malaysia for Cooking Malaysian Food. Kapor White lime used as part of a betel quid. Malaysian Meat Dishes. Ingredients. Malaysian Cuisine. Overview of Malaysian Cuisine History. Malaysian Butter Crabs Recipe 奶油蟹. Cook butter, fresh curry leaves and bird's eye chilli peppers together - the result? An explosively flavourful dish that is aromatic, spicy yet wildly comforting and this is the dish I am presenting today. 'Explosively flavourful' is really not an overstatement for this dish at least in my opinion, this is a truly representative Malaysian dish that is the unique culmination of the culinary methods from the 3 main races living in Malaysia, the Chinese, Malays and Indians.

I may have to add too that the use of butter is probably an early influence from the British that occupied Malaysia before we gained independence in 1957. Anyhow, origins aside, I am pretty confident that you will love the flavours in this dish - this method of cooking is famously used for cooking prawns but it produces equally fantastic results if you use crab as well. Devil's Curry Recipe. Blogs Singapore's best food: How to Make Roti Prata aka Roti Canai: Everything you need to know!