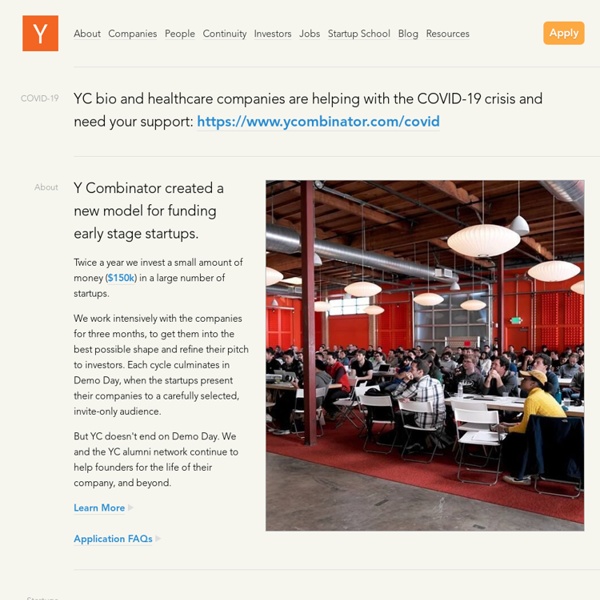 Techstars History[edit] After founding three companies in Boulder, Colorado, David Cohen decided to form a startup accelerator and began building a network of mentors within Boulder. The network would simultaneously bring together potentially interesting companies, leverage the entrepreneurial community behind these companies for three months, and then decide whether to invest further.[8][9] He enlisted Brad Feld, who had invested in some of the same companies as Cohen.[3][10][11] They partnered with David Brown, co-founder and president of Zoll Data Systems, and Jared Polis, founder of BlueMountain and ProFlowers, to form TechStars.[10][12] They recruited 70 web entrepreneurs, venture capitalists, and CEOs to provide mentoring.[13] Structure[edit] One of TechStars’ goals is to improve the entrepreneurial ecosystems in the 5 cities in which they operate.[30] There are between 50 and 100 mentors in each city for 10 to 15 companies.[30]

COMMON Watch as Alex Bogusky, Rob Schuham and John Bielenberg present COMMON, and follow along with the deck below (Download PDF). We’re confident that benefiting people, communities, society, the environment and future generations is the new advantage in business. We’re launching the COMMON brand in support of this transition from competitive advantage to collaborative advantage. COMMON is one part community; one part business prototyper; and one part collaborative brand. A living network of creative people rapidly prototyping dozens or hundreds of progressive businesses designed to solve social problems. Connected to a brand that’s community designed, community owned, and community directed.

A preacher, 500 startups, and a dream to change it all Dave McClure speaking at the US Embassy in Mexico City. Photo by David E. Weekly EPIC - Creative agency In the spotlight Want to challenge your SEO? Knewledge contacted us to benefit from our design expertise to update their logo and rethink their visual identity from the ground up. We’re proud of it! We hope you’ll like it! About the agency Ron Conway is a Silicon Valley startup's best friend The prolific angel investor has rarely met an Internet startup he didn't like. When it comes to picking the next big thing, there's a right way and a wrong way. And then there's the Conway. Ron Conway, with Coco, his rescue dog, photographed at their San Francisco home FORTUNE -- The rooftop deck of Ron Conway's San Francisco apartment building is packed with a random and seemingly incongruous assortment of tech A-listers, celebrities, and sports stars snacking on hors d'oeuvres and sipping fine wines. Conway, Silicon Valley's most prolific startup investor, has graciously opened his tony Pacific Heights pad, which has sweeping views of the Golden Gate, to let about 150 of his closest friends get a good look at the Blue Angels, the U.S.

Why your tech startup needs a mentor to grow You may be thinking that words such as ‘mentoring’ and ‘mentorship’ are just part of superfluous management speak and that the concept of having a mentor is in itself nothing but self-indulgent. After all, what effect can a mentor have on your startup other than to drain your time and resources? Actually, a mentor can help a young business in many different ways, even saving you both time and money in the long run. Here are just a few things a mentor will help you with: 1.

New Consumer Bill of Rights The original work done by John F. Kennedy on the Consumer Bill of Rights was a towering achievement and it was never our intent to start from scratch. In fact, it was our intent to change the original as little as possible while still expanding and updating the rights. Most changes are less of an oversight or lack of vision by the original drafters, and more to cover changes to the consumer landscape that in 1964 did not exist. ToyotaVoice: The Surprising Rebirth Of America's Industrial Centers By Natalie Burg Move over, Silicon Valley. The American Rust Belt is going fiber optic. Though local economies built on manufacturing may not sound like the perfect candidates to transition into the new economy, cities like Cleveland, Detroit and Pittsburgh are proving otherwise. Pittsburgh is an especially robust case in point.

Digital Painting Masterpieces that will Make You Dream Inspiration October 10, 2011 They say a picture is worth a thousand words. Some digital paintings can be worth even more.