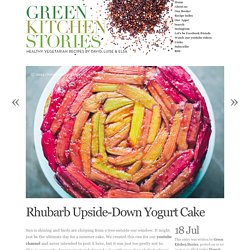 It might just be the ultimate day for a summer cake. We created this one for our youtube channel and never intended to post it here, but it was just too pretty not to. This is an upside-down yogurt and almond cake with rose shaped rhubarbs on top that are drizzled with a rhubarb and ginger syrup. The cake is gluten free and the addition of yogurt makes its consistency somewhat similar to a cheesecake. All in all it’s a gorgeous cake for summer gatherings. In other news, we have just heard that an advance copy of our new book Green Kitchen Travels is on its way to us, so expect a sneak peek soon. 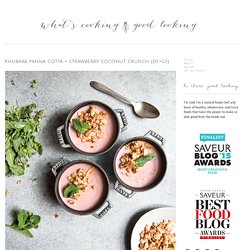 Simple Strawbery Cake with Grilled Rhubarb Vanilla Sauce. Let me start off by saying that I don’t really “get” rhubarb. 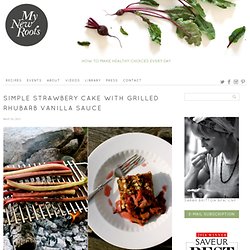 Perhaps it’s that I find the typical uses for it rather predictable, or that more often than not it’s accompanied by massive amounts of white sugar to offset the natural sourness. What is the point of trying to disguise the flavour of a vegetable (yes, it’s a vegetable) just so it’s palatable? Flourless rhubarb + lemon cake recipe. I started working when I was 14 years old. 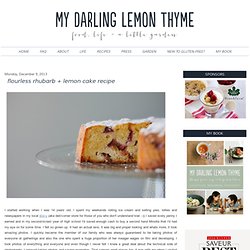 I spent my weekends rolling ice cream and selling pies, lollies and newspapers in my local dairy (aka deli/corner store for those of you who don't understand kiwi :-)) I saved every penny I earned and in my second-to-last year of high school I'd saved enough cash to buy a second hand Minolta that I'd had my eye on for some time. I felt so grown up. It had an actual lens, it was big and proper looking and whats more, it took amazing photos. I quickly became the member of our family who was always guaranteed to be taking photos of everyone at gatherings and also the one who spent a huge proportion of her meager wages on film and developing.

Rhubarb and Strawberry Whipped Porridge. Spring is in the air! 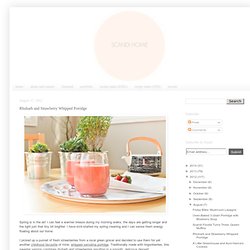 I can feel a warmer breeze during my morning walks, the days are getting longer and the light just that tiny bit brighter. Rhubarb, candied hazelnut + buckwheat cake + a giveaway! If you're into real, honest, wholefood then I suspect the person I am about to talk about today will come of no surprise to you at all, especially if you are from or happen to live in Australia. 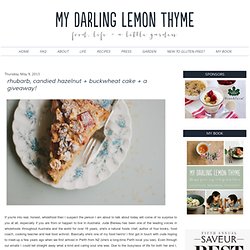 Jude Blereau has been one of the leading voices in wholefoods throughout Australia and the world for over 18 years, she's a natural foods chef, author of four books, food coach, cooking teacher and real food activist. Basically she's one of my food hero's! Rhubarb custard tart with a macadamia nut crust + raspberry ice. There used to be a restaurant called The Pie Plate near my home growing up. 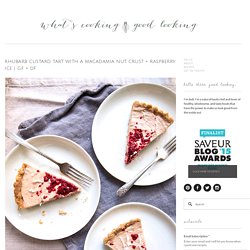 It was a bit of a hybrid between a diner and an IHOP that specialized in (you guessed it) pie, but you could also get typical diner / breakfast-y fare too, all day every day. It was my FAVORITE place on earth. Mostly because when you walked in there were glass cases filled with every type of pie you could imagine, my heaven. Apple, cherry, key lime, blueberry, lemon meringue ...... and so after we ate our breakfast, I was allowed to order whatever piece of pie I wanted.

I would usually order apple or blueberry ...... Rhubarb meringue tarts w/ lemon-hazelnut crust (gluten + dairy free) — dolly and oatmeal. I would probably bore you if i recounted the details of how many different incarnations this dessert had before its current state; but you should know that there were 2 batches of rhubarb curd (which is now my favorite thing to spoon into my mouth - move over peanut butter!) 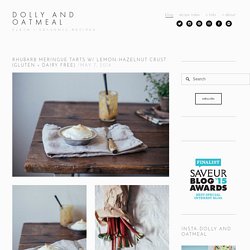 , mini layer cakes, one large layer cake, 4 cans worth of coconut cream, not to mention flour, nut meal, and other ingredients. i shudder to even write down how much was squandered here in the name of a singe dessert, but i have some trusty peeps (namely my husband and dad, thanks guys!) On my side willing to eat the leftover disasters. the lesson learned out of all this you ask?... Curd is THE word, and lemon + hazelnut is a new favorite combo! If you do nothing else, i urge you to make rhubarb curd, people!