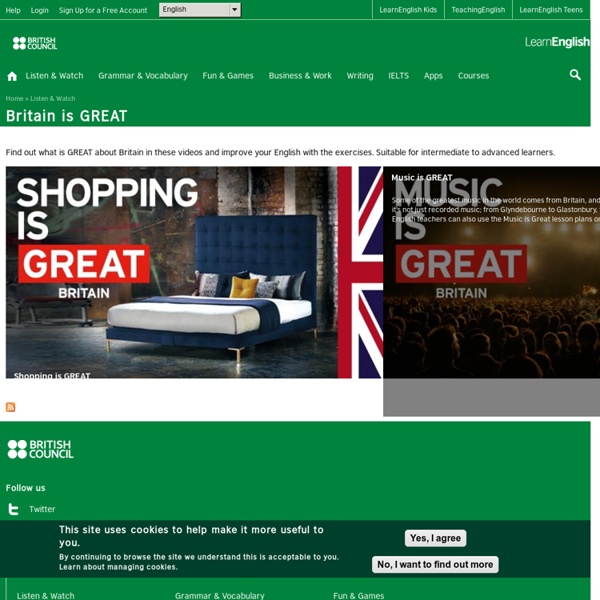 Thu, 16 Aug 12 Perhaps Britain's greatest contribution to the world is not art or technology or sport, but the English language itself. Great Britain is home to the first language of business, science and travel. The story of English begins more than a thousand years ago, but its global importance means it is still making history now. If you'd like to talk about the English language in class, there is an English is Great lesson plan on the British Council TeachingEnglish site.

8 Steps To Great Digital Storytelling First appeared on Edudemic. (Updated 3/14/2014) Stories bring us together, encourage us to understand and empathize, and help us to communicate. Long before paper and books were common and affordable, information passed from generation to generation through this oral tradition of storytelling.

Symbols of the United Kingdom, the Channel Islands and the Isle of Man This is a list of the symbols of the United Kingdom, its constituent countries (England, Scotland, Wales and Northern Ireland), and the British Crown dependencies (the Channel Islands and Isle of Man). Each separate entry has its own set of unique symbols. Symbols of the United Kingdom of Great Britain and Northern Ireland[edit] Father and Son This EFL lesson is designed around a beautiful short film titled Jordan and Norvin directed by Matt Bieler which documents the true story of the relationship between a father and son. Students practise using binomials, listen to the short film and write down the transcript, predict and write a narrative, watch the film and talk about different relationships. Language level: Intermediate (B1) – Upper Intermediate (B2)

50 holiday activities for Teaching English We have loads of holiday related materials. Get a start on our Christmas page or in our resources. Also some nice full lessons in our Lessons In A Can or purchase hundreds of resources for the holidays in our store. Create Script - Digital Storytelling Site (Source: Step 1: Decide on the Story You Want to Tell You probably already have a person or subject in mind. British Culture, Traditions and Customs This page has moved to ProjectBritain.com our new British life and Culture website Britain is full of culture and traditions which have been around for hundreds of years. British customs and traditions are famous all over the world. When people think of Britain they often think of people drinking tea, eating fish and chips and wearing bowler hats, but there is more to Britain than just those things.

Learning about War: Using BBC Video to Teach the Second World War The Second World War dominates the landscape of the twentieth century. Just over two decades after the ‘war to end all wars’, Europe was again plunged into turmoil following the German invasion of Poland. What followed was one of the most destructive wars in history. Learning about war is key to understanding the events of the twentieth century, which irrevocably changed the future as well as the map of Europe. ESL Teaching Videos Google + Students really enjoy watching movies and TV for a variety of reasons. For one, they get exposure to natural language in a non-threatening setting. Secondly, movies and video provide common ground to students of any international background. Below you'll find both general teaching resources as well as fully-developed lessons on various films and videos. So, pop yourself some popcorn and settle down in front of your computer for some fun with movies.It doesn't matter if you have contemporary office furniture, patio furniture or grandma's castoff furniture.

Love English: 10 things to see in London (magazine article) 'I love English': magazines designed for language learners that can be used in classroom as extra activities to add colour and motivated students. - talk about London - read about the 'top 10 things to see in London' Enter the imaginarium of Esl Warm up exercise: Some World cup warmer questions: 1. 51 Of The Most Beautiful Sentences In Literature We asked members of the BuzzFeed Community to tell us about their favorite lines from literature. Here are some of their most beautiful replies. 2. “In our village, folks say God crumbles up the old moon into stars.”