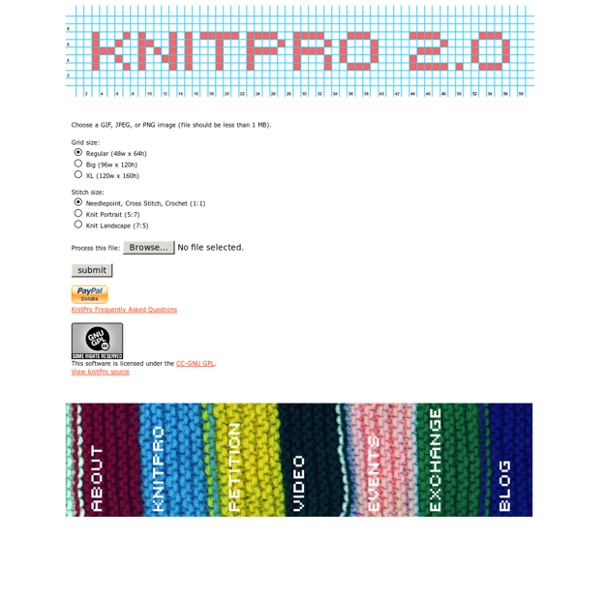 dinosaur heels Talk about walking with dinosaurs! Kick it really (really) old school with a pair of Dinosaur Heels that look just as good touring Jurassic Park as they do strolling down Park Avenue. These prehistoric pump upgrades are fully functional, the standard heel has been replaced with a steel bolt welded to the sole shank, with hollow dinosaur toys to cover up the hardware. It looks like these tiny terrors are holding you up, or maybe chasing you down as you are running away trying to escape Isla Nubla. DIY - Reverse Macro Ring As everybody knows, macro lens are expensive. Daniel Kyaw has a great way of creating a macro reverse ring for practically nothing. Reverse rings can be used to shoot macro shot using non-macro lens like 50mm. How To Spray Block Crochet or Knit Squares - Kim Werker's Blog I've fielded lots of questions about blocking crochet and knitting recently, and I thought a wee tutorial might be in order. So I spent this afternoon up in the mountains recovering from the last few months, and in so doing I blocked some squares. Here's the long and short of it; click any photo for more information, or check out the full photo tutorial on Flickr (there are about twice as many photos there*). Crochet blocking is the process of setting your fiber pieces with some form of water. You can spray block (demonstrated here), wet block (using a similar technique but starting by submerging your pieces in water until they're saturated), or steam block (using a steamer or a steam iron after you pin the dry pieces).

The Home of Mathematical Knitting The Home of Mathematical Knitting (sarah-marie's mathematical knitting pages and mathematical fiber arts pages) Conference Sessions and Books Carolyn Yackel and sarah-marie belcastro co-organized three mathematics conference sessions, each of which included a sequence of talks and a mathematical fiber arts exhibit. We have co-edited two books on mathematics and fiber arts written for crafters, mathematicians, and mathematics educators. oliphaunt a knitted elephant Here's another pattern that makes its way from knitter to knitter at my son's school. I've retooled it for you here. I most often use Lamb's Pride, but it looks great small in a lighter weight yarn and big using two different shades of gray LP held together. Of course, a Kureyon elephant would be very cool.MATERIALS: worsted weight wool yarn, size US4 or 5 needles, wool or poly stuffing, short lengths of yarn for embroidering eyes and for crocheting tusks (if desired)STITCH: Knit every row.PATTERN: (The elephant's rear legs and behind are the cast-on edge and you make your way up to the trunk from there by knitting the whole body as one piece. See the photo of an unsewn elephant below.)

Dwarven Battle Bonnet pattern by Sally Pointer/ Wicked Woollens *NEW! A lot of people are asking me for the modifiations with cables, bobbles, ‘spectacle helm’ and a ribbed beard. This has now been written up as a new version ‘Dwarven Battle Bonnet 2’ which is also top down construction and desn’t necessarily need fulling. Do check that out too before you buy the pattern, see which one you prefer! Sally April 2012*