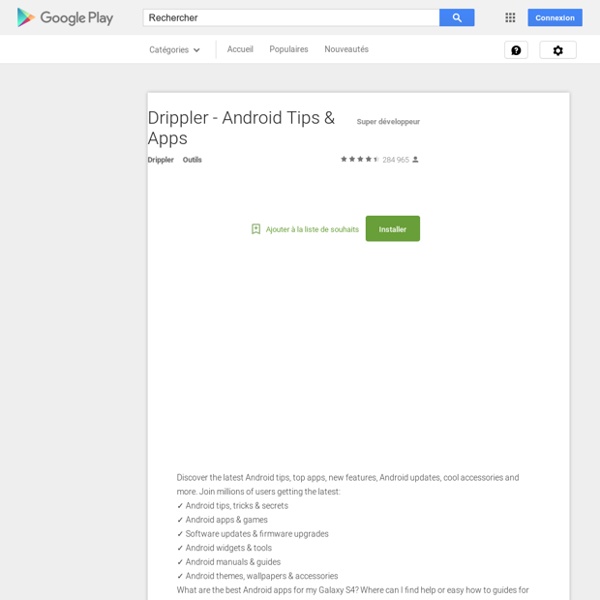 Discover the latest Android tips, top apps, new features, Android updates, cool accessories and more. Join millions of users getting the latest:✓ Android tips, tricks & secrets✓ Android apps & games✓ Software updates & firmware upgrades✓ Android widgets & tools✓ Android manuals & guides✓ Android themes, wallpapers & accessories What are the best Android apps for my Galaxy S4? Where can I find help or easy how to guides for my Nexus 10 tablet? What are the latest Android updates & upgrades for my Nexus 5? Drippler has all the answers! ★ Press✓ "Turn Your Phone Into the Best Damn Phone It Can Be" - Gizmodo✓ "A must-have for Android owners" - TheNextWeb✓ "Drippler offers news on Android updates and useful apps" - The New York Times✓ "Try Drippler. ★ Permissions✓ Access to external storage - to enable moving the app to SD card✓ Prevent phone from sleeping - only when getting new drips and will only prevent sleeping for a few seconds✓ Accounts - for Google+ sign in

Android Terminal Emulator Terminal IDE is an expandable terminal application, with a full Java / C / C++ / HTML / Android development kit, that runs on your Android device. It uses the command line, with many powerful and robust open-source applications, plus a custom ASCII on-screen 'soft' keyboard that works well (You must ENABLE it in your device's main Keyboard Settings).. and also has an extensive generic external 'hard' keyboard key mapper. This way CTRL / ALT / ESC etc.. should all be accessible. GCC 4.4.0, make 3.82, ctags, javac, java, dx, proguard, aapt, apkbuilder, signer, ssh, sshd, telnetd, bash 4.2, busybox 1.19.2, vim 7.3, nano 2.2.6, midnight commander 4.8, htop 1.0, TMUX 1.5, links 2.7, rsync 3.0.8, git 1.7.8, BitchX 1.1 and a nice terminal emulator are all available. The vim editor has been setup with c / java / HTML development in mind and is extremely powerful. With the addition of all the other apps provided, Terminal IDE becomes much MUCH more than an extremely powerful IDE.

Prezi ---This is a companion app. Enjoy Prezi’s full creative power at prezi.com --- Always on the move? Sweetie GO Locker Theme Lock screen easily and stylishly with the Top downloaded screen locker!50+ million downloads, 240,000+ user reviews and a 4.4-star rating, that is Go Locker! You may go to SMS messages, call logs and control the music player, all from the Lock Screen. ■ User Reviews “Love it, excellent lock with many different backgrounds to choose from, I recommend this app to anyone looking for cool wallpapers n locks for their phones.” - Adrian Spaulding “I love this app it is so much better then the regular lock screens for cellphones.” - Brittney Sanders “Live and so cool And I cant believe it's free!

Angry Birds Star Wars A long time ago in a galaxy far, far away... a group of desperate rebel birds faced off against a galactic menace: the Empire’s evil Pigtroopers! Rebel birds, striking from a hidden base, have won their first victory against the evil Imperial Pigs. During the battle, Rebel spies managed to steal secret plans to the Empire’s ultimate weapon, the PIG STAR, and are racing to deliver the plans to the Rebel Birds.

UberConference - Conferencing Stress-free conference calls. Never need a PIN. Never ask “who just joined” or “who said that?” Using any HTML inside the tooltip Tooltip content can be any HTML, not just plain text. Move your mouse over the Download button and you'll see a tooltip that contains an image, table and a link element. You can also see the slide effect in action. standalone demo AnTuTu Tester Z-DeviceTest lets you check your Android device sensors "health" in an intuitive and comprehensive way offering in-depth analysis all the characteristics of your Smartphone. You can use the application to: -To complement the manufacturer's technical information.-To compare the technical differences between more than 600 models of devices on the market.-Test the proper functioning of all your sensors.-Measure the accuracy of each sensor.

Eyelord Conquest throughout galaxy in the hottest new real time strategy game by Vinanet JSC! Friendship and alliance awaits you in the world of Conquer Craft! In the midst of a brutal civil war, you and your planet have at last secured your independence from the Rebel UnitedThe weakened Republic Government, after that the Aliens Invasion, attempt to regain control of the realm and enslave the population. Identify your enemies before they destroy you! To protect your people and your freedom! Key Features: