Strategies for Teaching Seven Native-Centered Books to K-12 Students. Use these instructional suggestions while reading these titles by Native authors about tribal nations. 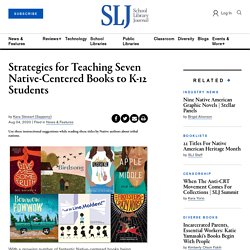 With a growing number of fantastic Native-centered books being published and available today, I am hopeful that we are headed toward a renaissance of Native writers’ works being used as a matter of course in schools, from kindergarten through college. Certainly, with increasing awareness of social and racial justice, many librarians and teachers are using Native-centered books in their instruction, and not just for cultural learning or social studies.

Native authors, writing about their own cultures, bring an accuracy and authenticity to their work that is hard for outsiders to replicate. With that in mind, the following books are all written by Native authors, about their own tribal nations. 5 of the Best Comics About Difficult Topics. This post contains affiliate links. 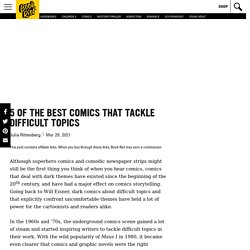 When you buy through these links, Book Riot may earn a commission. Although superhero comics and comedic newspaper strips might still be the first thing you think of when you hear comics, comics that deal with dark themes have existed since the beginning of the 20th century, and have had a major effect on comics storytelling. Going back to Will Eisner, dark comics about difficult topics and that explicitly confront uncomfortable themes have held a lot of power for the cartoonists and readers alike. In the 1960s and ’70s, the underground comics scene gained a lot of steam and started inspiring writers to tackle difficult topics in their work.

With the wild popularity of Maus I in 1980, it became even clearer that comics and graphic novels were the right medium to ruminate on trauma, history, and darkness. Book Riot. Literary Hub: The Best of the Literary Internet. Electric Literature. Bookish. Sneak peeks at great reads, behind-the-scenes insights from authors, lively & provocative reader's guides & fabulous free books. Reviews. Life can change in the blink of an eye... 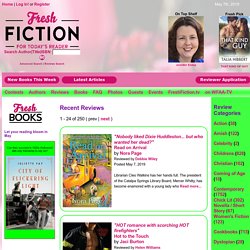 <HR> Since your web browser does not support JavaScript, here is a non-JavaScript version of the image slideshow: <P><P><IMG SRC=" ALT="slideshow image"><BR> He's stuck in the Past. She shows him their future. </P><HR><P><IMG SRC=" ALT="slideshow image"><BR> Can they succeed in 1920s Hollywood with only friendship to rely on? Reviews. 10 Nonfiction Books for Teens That Are Total Page-Turners. In their world of sometimes-dull textbooks and term papers on often pre-assigned topics, it’s natural for teens to flock to fiction in their spare time. But they would be remiss to overlook some of the amazing nonfiction works that are equally captivating, thought-provoking, and even worldview-affecting. Here are 10 extra-compelling nonfiction books for teens that span all kinds of interests and curiosities. 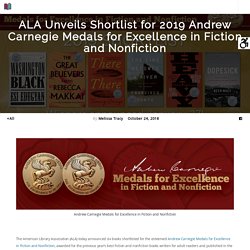 The two medal winners will be announced at RUSA’s Book and Media Awards Ceremony, sponsored by NoveList, during the ALA Midwinter Meeting & Exhibits in Seattle, Washington, on January 27, 2019. 2019 Andrew Carnegie Medals for Excellence in Fiction and Nonfiction shortlist titles include: Nonfiction. Alex Awards: 2018, by. Kirkus - Young Adult Book Reviews. In Italics. October 13, 2013 Happy Teen Read Week! 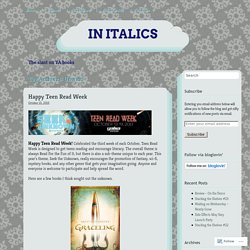 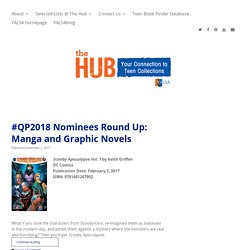 Breaking by Danielle RollinsBloomsbury USA Children’sPublication Date: June 6, 2017ISBN: 9781619637405 Charlotte has never been a top student at her prestigious, expensive, academically rigorous boarding school. Her best friends Ariel and Devon, however, are true Weston Prep material – freakishly smart and incredibly talented at a multitude of things.

Understandably, Charlotte is reeling after they both commit suicide within weeks of each other – they were pretty much her only real family. Then she discovers a clue… and realizes that Ariel has left her a trail of breadcrumbs right to the answer to all her questions. Guys Lit Wire. GreenBeanTeenQueen. Graphic Novel Resources. The Ultimate YA Bookshelf. YALSA's Ultimate Teen Bookshelf (PDF) highlights must-have teen materials for libraries. 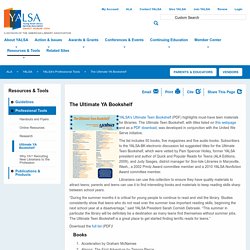 The Ultimate Teen Bookshelf, with titles listed on this webpage and as a PDF download, was developed in conjunction with the United We Serve initiative. The list includes 50 books, five magazines and five audio books. Subscribers to the YALSA-BK electronic discussion list suggested titles for the Ultimate Teen Bookshelf, which were vetted by Pam Spencer Holley, former YALSA president and author of Quick and Popular Reads for Teens (ALA Editions, 2009), and Judy Sasges, district manager for Sno-Isle Libraries in Marysville, Wash., a 2002 Printz Award committee member and a 2010 YALSA Nonfiction Award committee member. Librarians can use this collection to ensure they have quality materials to attract teens; parents and teens can use it to find interesting books and materials to keep reading skills sharp between school years. Booklist ONLINE. The Horn Book — Publications about books for children and young adults. 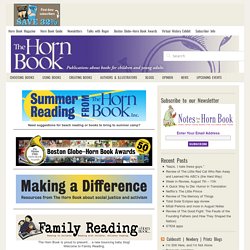 I hate these guys.” August 14, 2017 By Horn Book Preaching to the choir here (Trump voters notwithstanding), but we are disgusted, enraged, and horrified by the violence and hate perpetrated by White Supremacists in Charlottesville, Virginia, and also by what they stand for. If you need to … [Read More...] Follett School Solutions. Booklists. Epic Reads: Young Adult Books & Books for Teens. YA Books Central.