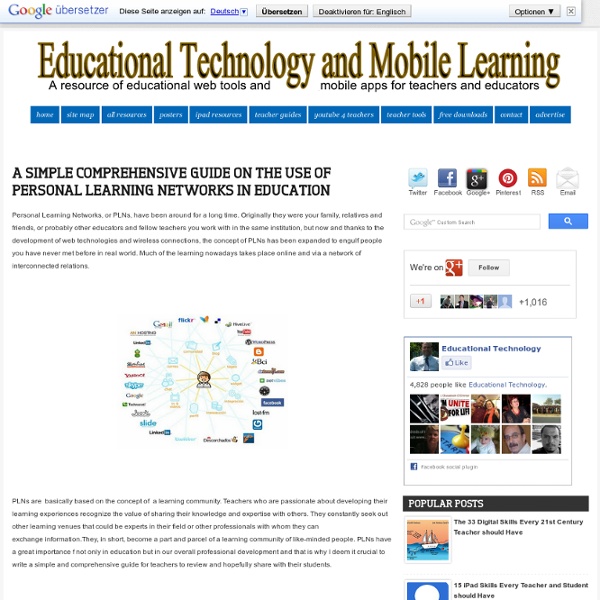 Personal Learning Networks, or PLNs, have been around for a long time. Originally they were your family, relatives and friends, or probably other educators and fellow teachers you work with in the same institution, but now and thanks to the development of web technologies and wireless connections, the concept of PLNs has been expanded to engulf people you have never met before in real world. Much of the learning nowadays takes place online and via a network of interconnected relations. PLNs are basically based on the concept of a learning community. Teachers who are passionate about developing their learning experiences recognize the value of sharing their knowledge and expertise with others. They constantly seek out other learning venues that could be experts in their field or other professionals with whom they can exchange information.They, in short, become a part and parcel of a learning community of like-minded people. Outline : What is a PLN ? What is a PLN ? Why PLNs in education ?

5 Personal Learning Networks (PLNs) for Educators Professional development and networking are vital in any field, and that’s especially true for educators. Whether it’s coming up with fresh ideas for lesson plans and classroom activities, seeking mentorship and support from veteran educators, or cultivating resources for technology integration or for meeting state standards, teachers need one another’s expertise. That’s why working with other educators in personal learning networks (PLNs) has become as important in an educator’s day as the time he or she spends teaching in class. Below is a short list of PLNs that already exist, followed by some resources to help teachers build their own The Educator’s PLN is a Ning site (or online platform for creating your own social network) that facilitates connections between educators. Resources for Building or Finding Your Own

20 Technology Skills that Every Educator Should Have By Laura Turner In 2005 I wrote a similar article and have had requests to write an update. Technology has changed a great deal in the last 5-6 years. Although, realistically, you would not use all of these technologies, you should be knowledgeable in what each of the following technology is and how it could be/might be used in a classroom. \ Infographic: #PLearning Framework (Part 2 of the Series) - Getting Smart by Guest Author - learning, personalized learning, plearning, students By: Justin DeLeon #PLearning Framework (Part 2 of the Series) first appeared on Education Elements on April 2, 2014. When you think of “personalized,” you probably think “unique,” “special,” and “just for me.” For the most part, we personalize as much of our lives as possible.

Pinterest as a learning tool: Do the two compute? Pinterest, the latest addition to hybrid forms of social networking, hosts a platform where users can 'pin' their favourite images to share with the world. At first glance, such a service may not seem to have much academic value -- but teachers around the world are utilizing Pinterest to make lessons more interactive. Not only can it be used to share ideas and lesson resources, but the notice-board styled platform allows for better organisation of ideas and images than other sites generally support, such as Facebook or Twitter. See also: Step-by-step: The beginner's guide to using Pinterest What is Pinterest? First of all, Pinterest is a social networking site based on bookmarking images, similar to the blog-roll site Tumblr but on a more organised and structured platform, and focused purely on visual content.

A Day in the Life of a Connected Educator – Using social media in 21st century classrooms One of our main goals at Powerful Learning Practice is to turn educators into 21st Century educators. That is, teach them how to use social media and other powerful Web 2.0 tools to transform their classrooms into learning environments that are ready for today’s iGeneration students. One of the most common questions we get is, “But where do we find the time to use all this new technology?” To answer that question, we developed this infographic – A Day in the Life of a Connected Educator to show that using social media in your classroom and in your life can be integrated, easy, and fun. Scroll down and take a look or click for a larger version.

The Beauty Of Cinemagraph GIFs Developed in 2011 by Jamie Beck and Kevin Burg, cinemagraphs are GIF images that combine still photography and video to produce a stunning effect. Typically, the entire GIF is motionless except for one or two elements, providing a brilliant juxtaposition between the motion and the motionless. For your viewing pleasure, we’ve collected 43 beautiful cinemagraph GIFs: edtechpost.wikispaces A Collection of PLE diagramsNOTE: You can log in with the guest account (edtechpost_guest, same password) to add your own PLE image to the wiki or email them to me at edtechpost@gmail.com. Index Tool-Oriented Use/Action Oriented People Oriented

If you don’t have a PLN, you don’t know what you’re missing!! « NovaNews Recently I was asked to write an article for an upcoming edition of Connections, a quarterly newsletter produced by the Schools Catalogue Information Service (SCIS), a business unit of Education Services Australia. Aiming to provide informative and useful material relevant to school libraries which helps keep library professionals up to date, Connections is distributed to all schools in Australia in both hard copy and digital formats. I was asked to write specifically about Personal Learning Networks (PLNs) both from a general and personal perspective. I found the process of putting my thoughts together both challenging and inspiring. Not all that long ago, I had never heard of PLNs.

6 Ways to Get a Tech Job Without a Tech Degree Aaron Shapiro is CEO of Huge, a global digital agency based in Brooklyn, and author of Users Not Customers. He has spent more than a decade as a technology entrepreneur, venture capitalist and management consultant. Jobs in tech are stronger than ever. In 2011, Amazon hired 22,500 people, bringing its workforce up to 56,200, and Google hired 8,000 people — more than ever in a single year.

Five Tips for New Teachers to Become Connected Educators Editor's Note: Connected Educator Month (CEM) was launched by the Department of Education in August 2012, and this year, it's being held in October. This post from Lisa Dabbs is a great primer for becoming a connected educator, and it's a must-read for CEM. (Updated 10/2013) This month, the U.S. Department of Education kicked off Connected Educator Month, with engaging keynotes, panel discussions, book chats, and more. During this month, educators in the U.S. and globally will have opportunities to connect themselves and their communities, online and in-person, to support their professional practice.