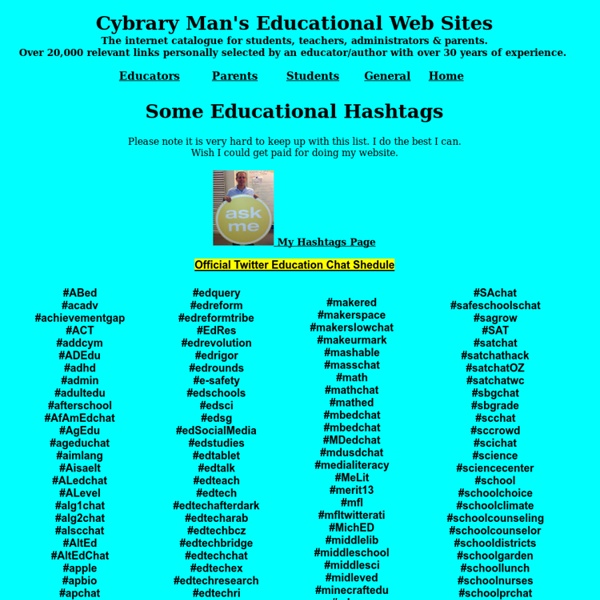 A Simple Guide on The Use of Hashtag for Teachers Chris Messana was the first guy to share a tweet containing a hashtag back on August of 2008. Since then, hashtags have become the most popular communicational medium of choice for television shows, political campaigns, educational news and updates, commercials, and also an icon of the 21st century pop culture. So, what is a hashtag ? Here is what Twitter said about it : " The # symbol, called a hashtag, is used to mark keywords or topics in a Tweet.

Top Twitter Hashtags for Teachers Hashtags are a great way of searching for tweets in a specific category from the whole of the Twitterverse – search for #ukedchat and you will come up with a huge stream of tweets which have been tagged as interesting to anyone wanting to read about UK education. As well as searching for tagged tweets, you can tag your own tweet to make sure you are talking to an interested audience that extends beyond your followers. You can tag absolutely any word on Twitter so it can sometimes be difficult to sort the wheat from the chaff. I have read dozens of lists of ‘useful’ hashtags where many of the tags have never been used more than a handful of times. Not useful in my book. By talking to my followers and noting which hashtags are most often used by the tweeters I follow I have compiled a list of hashtags which I think will all be of interest to UK Teachers though many extend far beyond the UK.

A Practical Guide For Teachers Who Just Got iPads The above image was wonderfully put together by Richard Wells over at ipad4schools.org after seeing the article (below) originally posted here on Edudemic. Thanks Holly! So you finally got a class set of iPads and you are not sure what to do next and where to start? Here is a very simple list of tried and true tips to help. Teachers' Favored Web 2.0 Tools At 14.2 tweets/minute, #EdTechChat was moving on Monday, August 19. (When school’s in session, #EdTechChat can log up to 2,000 tweets during the hour with several hundred participants.) Susan Bearden, Sharon Plante, and I co-moderated this week’s discussion on Web 2.0 tools, asking tweeps to share the benefits and challenges of using Web 2.0 tools, which ones are their favorites, and where they go to find new resources. One of the most retweeted tweets captures why educators incorporate Web 2.0 tools into their classrooms: “@julnilsmith: Web 2.0 tools make students MAKERS - not just MEMORIZERS. “ Many other participants echoed that these kinds of tools can expand opportunities for students-- particularly by providing them with an authentic audience and allowing them to collaborate with peers worldwide. When choosing which tools to try, @MrStaubSTEM summed it up best: “The best edtech is the one you can use effectively that meets the needs in your classroom.” · Animoto

Teachers Teaching Teachers, on Twitter: Q. and A. on 'Edchats' A screenshot from TweetDeck showing, left, a recent #Edchat stream and, right, the #Engchat stream at the same time. Like other groups with shared interests, from epidemiologists to James Joyce fans to locked-out N.F.L. players, teachers are turning to Twitter to collaborate, share resources and offer each other support. Many, in fact, are using it to take professional development into their own hands, 140 characters at a time. The A-Z Dictionary of Educational Twitter Hashtags Whether you’re a new or seasoned Twitter user, you likely come across confusing hashtags that probably look like a bunch of nonsense. First, What’s A Hashtag? The # symbol, called a hashtag, is used to mark keyword or topic in a Tweet.

I Declare an… iPad Oath So… we have reflected, oriented, and even fostered formative assessment. Think this might be a good time to solemnly declare… an oath. These previous posts (linked above**) have laid the ground work to prepare for a transformative year with mobile devices. Last year the middle school felt a need to create an iPad Oath that addressed specific classroom behaviors and legislated appropriate use beyond the existing R.U.G. (Responsible Use Guidelines). After reviewing multiple middle school AUP’s and iPad forms online and our own existing elementary iPad Oath, I decided to concoct one of my own using similar ingredients. Survival Tips for Building a PLN For the past 4 years, I have researched the what, who, how, and why of Personal/Professional/ Passionate Learning Networks (PLNs). We have seen the benefits of the people we choose to connect, collaborate, and problem solve with through social media. The educators, subject matter experts (SMEs), authors, and mentors we choose to derive knowledge from help us self-reflect on our methodologies and beliefs.

Ultimate Guide to Twitter Hashtags What is a Twitter hashtag? A hashtag is a way to unite global Tweets around some particular topic. Basically, these are tags that that help those who seek similar content discover your Tweets. 8 Ways That Apple Could Improve The iTunes U App Apple's iTunes U app and the accompanying web based iTunes U Course Manager remains the least noticed but potentially the most important edtech innovation of 2012. Provided that all of your students have an iOS device (iPad, iPhone, or Touch), the iTunes U app finally allows easy and secure distribution of curricular content (articles, book chapters, videos, recorded lectures) to mobile devices. The iTunes U app provides offline access, multi-speed media viewing, note taking on text and video, and seamless integration with iOS reading and annotation apps (such as GoodReader). Best of all, content in iTunes U courses (which is private, with enrollment controlled by the course builder or instructor), is dynamically updated on the students' iOS device.

Jan05_01 Editor’s Note: This is a milestone article that deserves careful study. Connectivism should not be con fused with constructivism. George Siemens advances a theory of learning that is consistent with the needs of the twenty first century. The 2012 A-Z List Of Educational Twitter Hashtags We got so many additions and updates to our 2011 list we thought it was time to bring you the most up-to-date list for 2012. So, without further ado, here’s the 2012 A-Z list of educational Twitter hashtags. We went through all the comments on the 2011 version , wrote down all the Twitter and Facebook updates, and compiled this list over the course of several months.

A (Second) iTunes U Courses Wish List Our students are loving iTunes U Courses. We have just rolled out a one-to-one iPad mini initiative for our small blended (residential / online) graduate program, and we are using the iTunes U app to deliver course materials. If you have not played with the free iTunes U app and Course Manager, (the web-based platform used to build your courses), then I highly recommend that you check it out. Apple has been strangely quiet in promoting the private iTunes U capabilities, and I've been surprised by how few people seem to know about this secure, elegant, and robust method of delivering course materials for iOS devices.