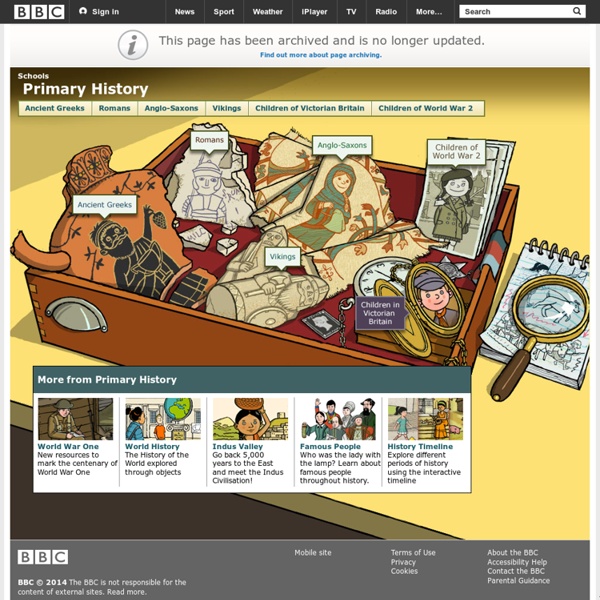 25 Terrific Online Games for English Language Learners - Online College Courses English language learners fall into two categories — native speakers and those pursuing it via ESL/EFL instruction (or self-instruction!). But both demographics can build up their skills, no matter their age or proficiency, through game-based learning. The Internet, in its infinite providence, does not disappoint when it comes to hosting effective resources for teaching and reviewing the core components of the English language. My Best of series You can find all of my “Best” lists in broad categories here. The link to that page can also be found at the top right of my blog: My Best Of Series I also have them all on another page where they are listed in the chronological order in which I originally posted them.

Timelines: Sources from History This British Library interactive timeline allows you to explore collection items chronologically, from medieval times to the present day. It includes a diverse combination of texts: those that allow glimpses of everyday life (handbills, posters, letters, diaries), remnants of political events (charters, speeches, campaign leaflets), and the writings of some of our best known historical and literary figures. Launch Timelines: Sources from History Timelines is a fantastic resource for learning about culture, politics, technology and everyday life through the ages.

Expressions for Agreeing and Disagreeing This page is about words and phrases that we use when we agree or disagree with someone in English. Stating an opinion In my opinion...The way I see it...If you want my honest opinion....According to Lisa...As far as I'm concerned...If you ask me... Asking for an opinon What's your idea? How to Make a Timeline: How to Easily Create any Kind of Timeline Try the following tools to make a timeline The internet is filled with useful web sites, and among them are timeline generators that can help you easily create a timeline. While poking around on the internet I have come up with a list of timeline generators that may help you out in creating a timeline. Web-based timeline generators Whether you are making one of your own life, a historical timeline, for a class, for a meeting, or even for a presentation, the timeline generators listed below should help make quick work of it.

happy English is a West Germanic language that was first spoken in early medieval England and is now a global lingua franca. Named after the Angles, one of the Germanic tribes that migrated to the area of Britain that would later take their name, England, both names ultimately deriving from the Anglia peninsula in the Baltic Sea. It is closely related to the Frisian languages, but its vocabulary has been significantly influenced by other Germanic languages, particularly Norse (a North Germanic language), as well as by Latin and French.[6] English has developed over the course of more than 1,400 years.

Clil4U CLIL implementation with pools of resources for teachers, students, and pupils Back to Top The project needs were based on several reports, e.g. Eurydice “Content and Language Integrated Learning (CLIL) at School in Europe 2006” which in “Factors inhibiting general implementation” points at a need for training language teachers in the special skills needed to provide CLIL through initial and in-service training programs devoted to methods used to teach a subject in other languages.

Berritzegune Nagusia A Content-Based approach to teaching and learning second languages has been adopted both for INEBI and BHINEBI. The content-based teaching-learning approach provides a very adequate frame to organise various aspects of this proposal. It helps make the acquisition of language parallel to that of natural language acquisition and of concept development. Behemoth, bully, thief: how the English language is taking over the planet On 16 May, a lawyer named Aaron Schlossberg was in a New York cafe when he heard several members of staff speaking Spanish. He reacted with immediate fury, threatening to call US Immigration and Customs Enforcement and telling one employee: “Your staff is speaking Spanish to customers when they should be speaking English … This is America.” A video of the incident quickly went viral, drawing widespread scorn. The Yelp page for his law firm was flooded with one-star reviews, and Schlossberg was soon confronted with a “fiesta” protest in front of his Manhattan apartment building, which included a crowd-funded taco truck and mariachi band to serenade him on the way to work. As the Trump administration intensifies its crackdown on migrants, speaking any language besides English has taken on a certain charge.