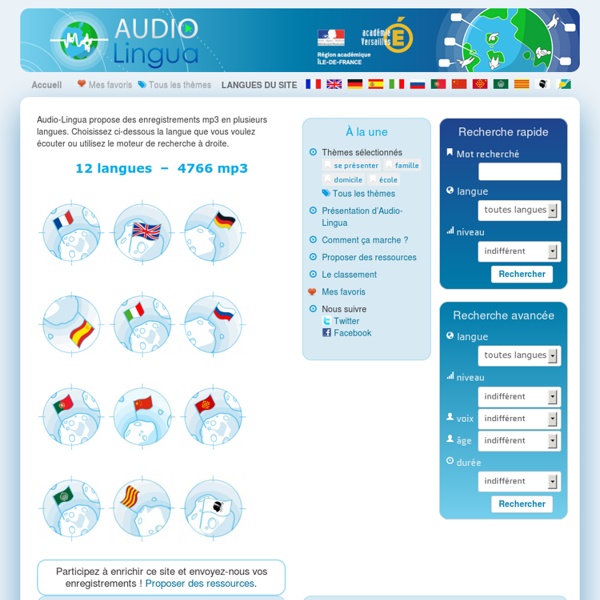 bab.la Phrases The phrase dictionary includes thousands of common phrases divided into six main categories: Academic Writing, Business Communication, Applications and Résumés, Personal Correspondence, Travel, and Immigration. Within each category widely used phrases are grouped together according to the situation in which a phrase is used. The situation description helps you judge in which context to use the phrase. 21 Digital Tools to Build Vocabulary l Dr. Kimberly's Literacy Blog If you follow this blog, you know that I believe effective vocabulary instruction is just about the most important instructional activity for teachers to get right. For lots of reasons. Vocabulary influences fluency, comprehension, and student achievement. How’s that for starters? In addition, a broad vocabulary is important for effective speaking, listening, reading and writing.

PodCaz audio 1 50. Catherine from London physical appearance, likes and dislikes Why some people find learning a language harder than others Scientists at McGill University in Canada found that if left anterior operculum and the left superior temporal gyrus communicate more with each other at rest, then language learning is easier. "These findings have implications for predicting language learning success and failure," said study author Dr Xiaoqian Chai. For the study, researchers scanned the brains of 15 adult English speakers who were about to begin an intensive 12-week French course, and then tested their language abilities both before and after the course. Participants with stronger connections between the left left anterior operculum and an important region of the brain's language network called the left superior temporal gyrus showed greater improvement in the speaking test.

What happens in the brain when you learn a language? Learning a foreign language can increase the size of your brain. This is what Swedish scientists discovered when they used brain scans to monitor what happens when someone learns a second language. The study is part of a growing body of research using brain imaging technologies to better understand the cognitive benefits of language learning. Tools like magnetic resonance imaging (MRI) and electrophysiology, among others, can now tell us not only whether we need knee surgery or have irregularities with our heartbeat, but reveal what is happening in our brains when we hear, understand and produce second languages. The Swedish MRI study showed that learning a foreign language has a visible effect on the brain. Young adult military recruits with a flair for languages learned Arabic, Russian or Dari intensively, while a control group of medical and cognitive science students also studied hard, but not at languages.

5 Great YouTube Channels for Learning English September 2 , 2015 Youtube is undoubtedly a great source of educational content to use in class with your students. It also hosts tons of channels that provide instructional tutorials specifically tailored for different learning needs and styles. We have already reviewed some of these channels in previous posts and today we are sharing with you some of our favourite YouTube channels for learning English. Software Translates Your Voice into Another Language Researchers at Microsoft have made software that can learn the sound of your voice, and then use it to speak a language that you don’t. The system could be used to make language tutoring software more personal, or to make tools for travelers. In a demonstration at Microsoft’s Redmond, Washington, campus on Tuesday, Microsoft research scientist Frank Soong showed how his software could read out text in Spanish using the voice of his boss, Rick Rashid, who leads Microsoft’s research efforts. In a second demonstration, Soong used his software to grant Craig Mundie, Microsoft’s chief research and strategy officer, the ability to speak Mandarin. Hear Rick Rashid’s voice in his native language and then translated into several other languages:

Stand Still. Stay Silent - webcomic, page 196 14 October. 2014 Language trees for the language lovers! I've gathered pretty much all the data for this from ethnologue.com, which is an awesome well of information about language families. And if anyone finds some important language missing let me know! (Naturally most tiny languages didn't make it on the graph, aww.