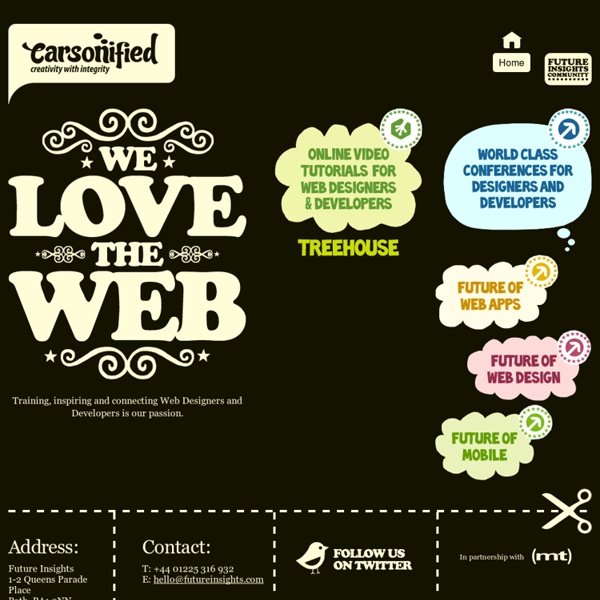 The end of the killer feature At The Economist Ideas Economy event Matt Mullenweg, founder of WordPress, in an excellent talk about open source software, proclaimed the end of the killer feature. He asked the packed audience of high profile influentials how many people use Firefox, and how many of them have a plugin installed – and a good percentage of them raised their hands. He’s got a point. For many kinds of products, it’s the end of the killer feature. Pixel Proliferation: A Toolset For Managing Screen Resolutions In the digital world, change is constant. The device landscape is always changing and the device types are proliferating. With the increasing demand for more fluid and responsive experiences, it is becoming an even more arduous task to keep all of the device resolutions and screen sizes straight. So we have packaged up our set of tools that help us stay current and we are offering it for download.

How Zynga Survived FarmVille When Zynga launched FarmVille last June, the company thought 200,000 daily active users in the first two months would be a success. Within eight weeks, the game had surpassed Zynga’s hits of the previous two years. For the first 26 weeks FarmVille added 1 million net new users per week; it currently has 70 million active users a month. The story of Mark William’s last two years has been one of trying to support such unpredictable growth. 21 Amazing CSS Techniques You Should Know Cascading Style Sheets(CSS) is one of the building blocks of modern web design without which websites would have been ugly just like they were a decade ago. With time, the quality of CSS tutorials out there on the web has increased considerably. Here are 21 amazing CSS Techniques that you might not have thought could be done by CSS. 1. Cross Browser CSS SlideShow

40 Fresh Examples of Minimal Web Design 343 shares 11 Inspiring Examples of Textures and Patterns in Web Design Here at WDL we like to browse the web to find inspiring websites to show our readers. Every week we like to gather lists based on styles, trends and nice elements we believe you will like it. Elements like textures and patterns, which have been around for a while and are still being used to… Read More What Drives Consumer Adoption Of New Technologies? I'm participating in a panel discussion this morning during the offsite of a major media company. They sent me a list of questions in preparation of the event. One of the questions was the title of this post; "What drives consumer adoption of new technologies?". It's an interesting question and one I've never tried to answer directly in writing. But it's also a question we attempt to answer every day in our firm as we evaluate thousands of new startups every year.

Slide in Captions <figure class="cap-left"><img src="yay.jpg" alt=""><figcaption> yay!!! </figcaption></figure> Amazon Architecture This is a wonderfully informative Amazon update based on Joachim Rohde's discovery of an interview with Amazon's CTO. You'll learn about how Amazon organizes their teams around services, the CAP theorem of building scalable systems, how they deploy software, and a lot more. Many new additions from the ACM Queue article have also been included. Amazon grew from a tiny online bookstore to one of the largest stores on earth. They did it while pioneering new and interesting ways to rate, review, and recommend products.

33+ Online Resources to Learn CSS August 1st, 2009 Posted in CSS An Introduction for Beginners Before going into detail let’s learn about CSS or Cascading Style Sheets. In layman’s language CSS is a language that adds style to your document like colors, borders, margins and borders. How to Create “Touchable” Web Designs What are touchable web designs? When most people check out a new website, they sometimes think “yikes, this website looks like crap” or “wow, this is one of the best websites I’ve ever seen!” What is it that makes the great websites look so great? In my experience, when I think of “web 2.0″ and “great web designs” I think of modern web designs that look touchable.