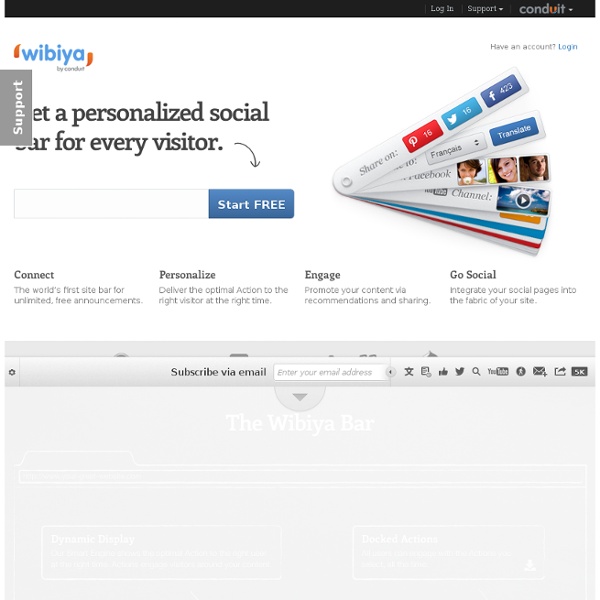 MarsEdit 3 - Desktop blog editing for the Mac. Rich And HTML Text Editing Whether you love HTML or can't bear the sight of it, MarsEdit's editor will thrill you. If you prefer the best of both worlds, you can switch easily between the two. Wildly Compatible Works with WordPress, Blogger, Tumblr, TypePad, Movable Type and any blog that supports a standard MetaWeblog or AtomPub interface. Perfect Previews

Use jQuery Mobile to Build a Native Android News Reader App In this three part tutorial series, our main goal is to describe how jQuery Mobile can be used to develop a native Android application. First, we will develop a stand-alone, sample web application that will browse articles from Yahoo! News using jQuery Mobile. eyeOS – Cloud Computing – Web Desktop – Cloud Desktop That said, this is not a new application or add-on: once you are in eyeOS, you have already joined the conversation. The wall made it to the top menu and now it has a spot next to the projects menu. You will find two options: Feed and My Wall. The feed gathers all the activity from the groups you belong to in one place. Use it to stay informed about events within your reach. On your wall, you’ll see all the activity and posts between you and your contacts, as well as your status updates.

Initializing a Build Environment This section describes how to set up your local work environment to build the Android source files. You will need to use Linux or Mac OS. Building under Windows is not currently supported. For an overview of the entire code-review and code-update process, see Life of a Patch. Choosing a Branch

Get Started Developing for Android with Eclipse Why You Should Get Excited About Emotional Branding Globalization, low-cost technologies and saturated markets are making products and services interchangeable and barely distinguishable. As a result, today’s brands must go beyond face value and tap into consumers’ deepest subconscious emotions to win the marketplace. In recent decades, the economic base has shifted from production to consumption, from needs to wants, from objective to subjective.

The 2012 A-Z List Of Educational Twitter Hashtags We got so many additions and updates to our 2011 list we thought it was time to bring you the most up-to-date list for 2012. So, without further ado, here’s the 2012 A-Z list of educational Twitter hashtags. We went through all the comments on the 2011 version , wrote down all the Twitter and Facebook updates, and compiled this list over the course of several months. What follows is our best effort to bring you the biggest and baddest list of hashtags. I’m sure we still missed some as new hashtags seemingly pop up every day. In any case, let us know what we missed in the comments or on our Facebook page! Android App Development - 5 Ways To Make Your Own Android Application Since the iPhone the evolution of apps has been very, very fast. Thousands upon thousands of apps have been created for both the iPhone, as well as for the Google android app. There's an app for business, for fun, for music, for design, for time for, well, everything. It has, in a sense, started a whole new artistic revolution, where creators can take their imagination and translate into a nifty little application (Anyone tried out the music app Reactables?)

25 Important Twitter Guides and Apps For Teachers Diving into a rich and overwhelming social network like Twitter can be difficult. I know of many teachers and academic-minded people who are still unsure about the merits of the tool or are simply unsure where to start. The following 10 (+1 bonus!) beginner’s guides to Twitter each do a tremendous job at informing without confusing. If you’re not new to Twitter and just want to take a refresher course in why you actually joined the network in the first place, you may want to check out any one of these guides. After all, it can’t hurt to check out the ‘ Twitter Etiquette ‘ guide from time to time

Creative Vision We focused the design of Android around three overarching goals, which apply to our core apps as well as the system at large. As you design apps to work with Android, consider these goals: Enchant me, Simplify my life, and Make me amazing Enchant me Beauty is more than skin deep. Introduction To develop apps for Android, you use a set of tools that are included in Android Studio. In addition to using the tools from Android Studio, you can also access most of the SDK tools from the command line. Developing with Android Studio is the preferred method because it can directly invoke the tools that you need while developing applications. However, you may choose to develop with another IDE or a simple text editor and invoke the tools on the command line or with scripts. This is a less streamlined way to develop because you will sometimes have to call command line tools manually, but you will have access to the same number of features that you would have in Android Studio. Figure 1.

50 More Gorgeous Android Apps Unless you’ve been living under a rock for the last few years, you’re probably aware of the battle that has been raging between the iOS and Android platforms. Loyalists on both sides have been taking turns throwing punches at each other. For a good few years, the one punch Android fans were having a tough time deflecting was about the visual quality of apps on iOS. Make an App without Coding using Andromo App Maker for Android If you can point and click, you can make an Android app. No kidding. Make your own app right now. Andromo makes it fast and easy to create Android apps, with absolutely no programming required.