c4dtools.net ▪ Your Marketplace for C4D Tools 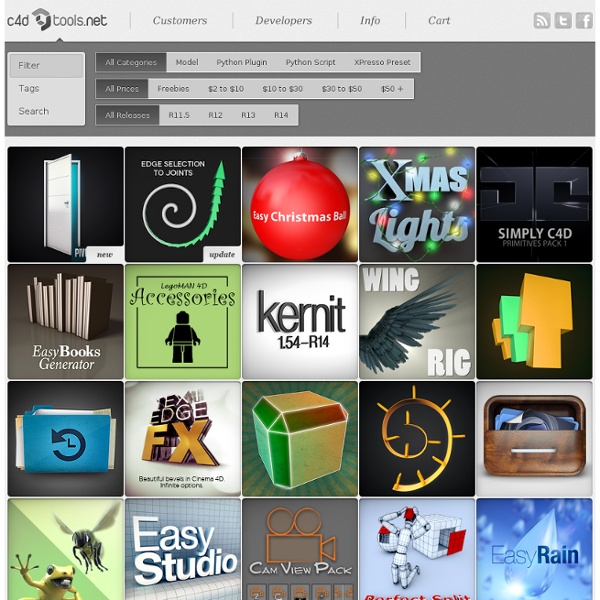 The Pixel Lab 3D Video Production Pack : Down3Dmodels The Pixel Lab 3D Video Production Pack c4d | 3D models | 83 MB I’m extremely excited to introduce The Pixel Lab “Video Production Pack!”. We’ve created a huge pack with 20 video production themed models. You will also get two bonus behind the scenes time-lapse videos showing Remco modeling the Camera Dolly and Follow Spotlight from scratch. NitroBookCase Pictures Copyright by :Nikita Gontarev Description : NitroBookCase is plugin can help you very easy to place all the book object in shelves you can also control to change the placement style and randomize you can make your only book also a bonus you can make a easy flip page animation .and all this in the minute System : Win and Mac 32,64 bit Cinema4D : R12,R13,R14,R15 ( Dosen’t work in demo version )

The Best Cinema 4D Tutorial Ever: Search results for TURBULENCEFD Tutorial CINEMA 4D turbulenceFD - Burn Shader TUTORIAL CINEMA 4D TurbulenceFD Cinema 4D Tutorial Explosion TurbulenceFD and AE Cinema 4d tutorial turbulenceFD for beginners part 9 Cinema 4d tutorial turbulenceFD for beginners part 7 Cinema 4D Plugins A mesh smoothing plugin implementing several variants of the discrete Laplacian on triangulated surfaces. Available as deformer and command plugin. Just put the deformer under a polygon object to make it smooth. Creating Particles in Cinema 4D for Import With Plexus for After Effects Bringing two amazing tools together, Serge Mustu shows various mehtods for bringing Particles that were created in Cinema 4D into After Effects for use with the Plexus 2 plugin. Here I show, how you can import Cinema 4D Particles right into After Effects for the use of the Plexus plugin from Rowbyte. There are at least 3 ways I found out, how to import the particles from Cinema: via Vertices, Nulls & Lights Serge shows at least three ways here, exporting as lights, null objects, and vertices with some methods being inherently more efficient than others. By adding vertices to a particle emitter, Cinema 4D is unable to see the result, although Plexus 2 surprisingly can. Plexus 2, the next generation particle system plugin for After Effects is available from AEScripts and recently updated with the support for render objects, random sprite modes, and improved OBJ support which also comes bundled with the Plexus OBJ Sequence Exporter for Cinema 4D.

Eadweard Muybridge Contemplation Rock Exhibition dates: 26th February – 7th June, 2011 While rightly famous for his work on animal locomotion it is the first group of photographs in this posting that shine most brightly. It is often overlooked how magnificent a photographer Eadweard Muybridge was and what a brilliant eye he had. The top three photographs, especially the first one, are knockouts – radiant jewels in which the tensional points of the composition and the atmosphere of the scene are captured magnificently.

MagicBevel Description : Magic Bevel for modeling tool to make easy bevel System : Win and Mac 32,64 bit Cinema4D : R13 ,R14 How to Export 3d Camera Data from Cinema 4D into After Effects – Day 1 When it comes to motion graphics, exporting camera data from a 3D program to a 2D compositing program is one of the most important techniques you could know. In this tutorial, you will learn the basics behind getting Cinema 4D and After Effects to talk to one another, including using exporting tags, using the camera data in After Effects within 3D layers and effects, and how to set up and tweak your render for the best results. Before you dive in, I'd like to stress a few points: -I'm using AfterEffects CS3 and Cinema 4D R11. 7 Documentales sobre Animación - Design Republik “Creating animation means creating a fictional world. That world soothes the spirit of those who are disheartened and exhausted from dealing whit the sharp edges of reality”. - Hayao Miyazaki A continuación una serie de documentales sobre la historia de la animación, animadores y estudios representativos de la industria. ¿Qué documentales añadirías a esta lista?1.

Create a Stylish Liquid Type Logo using Cinema 4D, RealFlow, and After Effects In this in-depth, 86 step tutorial, you will learn how to create a stylish liquid looking logo using Next Limit's Realflow. Using Cinema 4D as the main 3D package, you will learn how to integrate Illustrator and After Effects to efficiently design, simulate, export, and render your final animation. Final Effect Preview Step 1

Magic Solo Description :MagicSolo description With this plugin you can make one or multi object to solo also it’s solo automatic the material to focus easy like you open your objects to a new scene ,it’s disable all the simulation also speed up you cinema4d if you have complex simulation or alot polygon mesh and you want to focus only to one finaly you can render only the solo object like this you can focus in object you like most . this plugin is very helpfull if you work to very big scenes . ShortCut: If you hold shift in your keyboard -> is ignore all the childrens version 1.2: