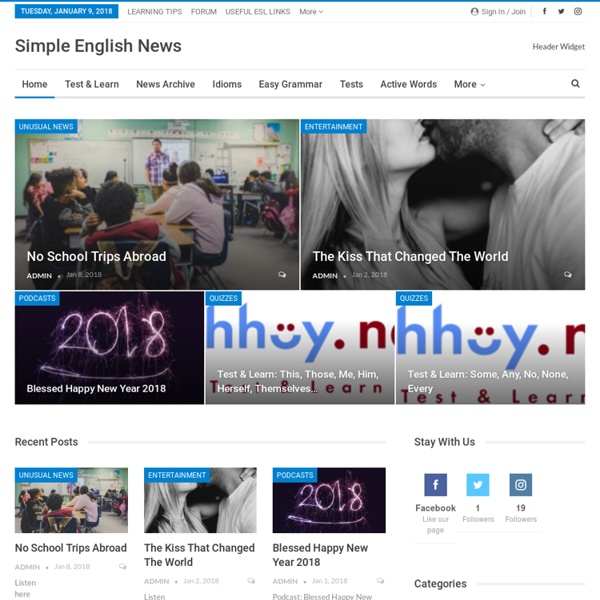 SNN - Student News Net Thank you for visiting SNN. For 10 years, the same team of professionals has been producing SNN with a sharp focus on original, interesting content as both a mediator and motivator for learning. SNN has spent years studying the challenge of providing meaningful integration of technology in the classroom, conducting educational research, and working closely with teachers. The bottom line is that SNN today is aligned to basic principles of learning to support student achievement. Motivating students to read and explore a topic in more depth is one of SNN's greatest strengths. SNN's only source of revenue is subscriptions.

Lights Camera Action Search for Ideas and Resources Filter Results Menu Lights Camera Action Take part in a wide range of film, movie and animation making activities with our free 'Lights, Camera, Action!' teaching resources! One in five young people has suffered online abuse, study finds Cyberbullying is a worse problem among teenagers than drug abuse, according to almost half of all young people surveyed in a new study that finds one in five has experienced online abuse. In the global YouGov survey of more than 4,700 teenagers from across the world, a fifth of those who had experienced cyberbullying said it had made them consider suicide, and more than half said being taunted online was worse than being bullied in person. A quarter of those bullied closed down social media accounts and more than a fifth skipped school, the survey commissioned by Vodafone found. Of those who were bullied, almost 40% did not tell their parents, citing feelings of shame or fear.

Kelly Gallagher – Resources Part of the reason my students have such a hard time reading is because they bring little prior knowledge and background to the written page. They can decode the words, but the words remain meaningless without a foundation of knowledge. To help build my students’ prior knowledge, I assign them an "Article of the Week" every Monday morning. By the end of the school year I want them to have read 35 to 40 articles about what is going on in the world.

New York Times lesson plans Photo Do your students follow Humans of New York? The site and the related Tumblr and Facebook page created by the amateur photographer Brandon Stanton have millions of followers, and the “Humans of New York” book, published in October, landed in the No. 1 spot on the New York Times hardcover nonfiction best-seller list its first week on sale. First Fleet: 04/02/2014, Behind the News Recently we celebrated Australia day on the 26th of January. But why do we mark it on that day in particular? To answer that question, Sarah will take you back in time to 1788, to meet some kids who came to Australia on the First Fleet.