Jobs : Science Jobs of the Week 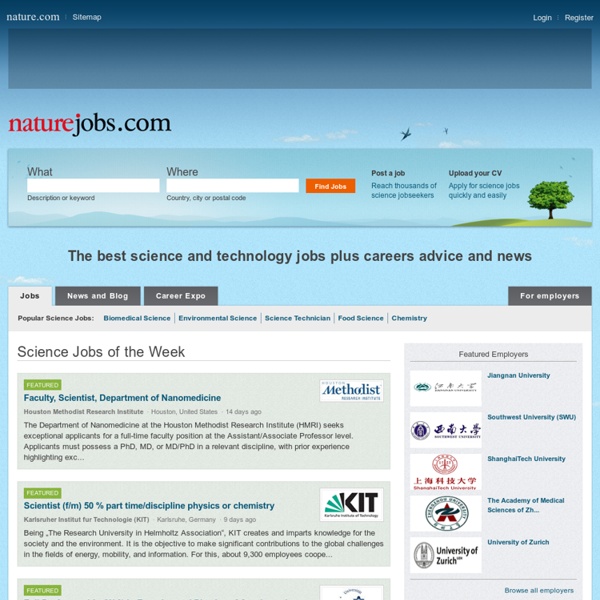 Jobs - EURAXESS Postdoc Position in Health Economics The recently established international, transdisciplinary Ludwig Boltzmann Institute Applied Diagnostics (LBI AD) in Vienna, Austria, focuses on the development and application of non-invasive dual diagnostic methods (combining molecular epigenetic and [...] 19.34 Country: Austria Organisation: Ludwig Boltzmann Institute Research field: Economics assistant Assistant in the scientific area of Natural Sciences, scientific field Chemistry, on a full time, temporary contract (replacement). BOL: List of Bioinformatics Vacancy, Jobs, Opportunity websites Bioinformatics cover wide area of biology, and indulge in almost all sort of science related work. Bioinformatician give strong emphasis on open access to biological information as well as Free and Open Source software!! There are several jobs opening in bioinformatics all around the world, but many of them do not get proper attention due to lack of advertisements, or social connectivity.

Antitumor Immune Response Up Div Image Some tumor cells can evade the body’s immune response, which may result in disease progression1,2 One function of the body's immune response is to detect and destroy tumor cells through activated T cells and other mechanisms; tumor cells express multiple antigens that are not expressed in normal tissue.1–3 Dresden International PhD Program: Requirements Content: A truly excellent academic performance and prior research experience is expected. Distinctive proficiency in textbook knowledge of the relevant scientific disciplines is essential. Applicants must hold, or anticipate receiving before taking up PhD thesis work, an undergraduate degree in one of the following disciplines: Life sciencesNatural sciencesEngineeringComputer SciencePhysicsApplied mathematicsMedicine

Don't Know What You're Passionate About? Here Are 15 Ways To Discover It By Josh Richardson Guest Writer for Wake Up World For some, hobbies become their passion and they always have a strong foundation for pursuing what they enjoy. For others it’s more complicated because they either have trouble discovering the challenges that inspire them, or that one thing that really makes them tick. Either way, we all have something that excites us. Accelerating early disease detection with nanobiotechnology - IBM Blog Research Imagine this scenario: Annual physical examinations are supplemented by an affordable home diagnostic chip, allowing you to regularly monitor your baseline health with just a simple urine sample. Though outwardly you appear to be in good health, the device reveals a fluctuation in your biomarker profile, indicating the possible emergence of early stage cancer development or presence of a virus. Diagnostic devices like a home pregnancy test have been around since the 1970s. It revolutionized a woman’s ability to find out if she was pregnant without having to wait for a doctor’s appointment to confirm her suspicions.

Getting a job with SNH - Scottish Natural Heritage Scottish Natural Heritage is the leading public body responsible for advising on a key asset that underpins Scotland's wealth, health and quality of life. Our job is to conserve this resource, to promote its sustainable management and to encourage people to access and enjoy it responsibly. Scotland is celebrated the world over for ingenuity, a sense of adventure and pride. Hydrological modelling and data assimilation - Snow Model ... - Emprego Internacional University of Saskatchewan - Saskatoon, SK (Canadá) The Global Institute for Water Security (GIWS) at the University of Saskatchewan (UofS) is leading Canada's Changing Cold Regions Network (CCRN). CCRN aims to understand, diagnose and predict interactions amongst the cryospheric, ecological, hydrological and climate components of the changing Earth system at multiple scales. With a focus on Western Canada's rapidly changing cold interior, this major initiative links 8 Canadian universities, 4 government agencies and 15 international academic collaborators. CCRN is investigating a set of critical cold region environments, including the Western Cordillera, Western Boreal Forest, Lowland Permafrost and Prairies, and their integrated response at the scales of the Saskatchewan and Mackenzie river basins and the regional climate system.

Quantum Teleportation - IBM Teleportation is the name given by science fiction writers to the feat of making an object or person disintegrate in one place while a perfect replica appears somewhere else. How this is accomplished is usually not explained in detail, but the general idea seems to be that the original object is scanned in such a way as to extract all the information from it, then this information is transmitted to the receiving location and used to construct the replica, not necessarily from the actual material of the original, but perhaps from atoms of the same kinds, arranged in exactly the same pattern as the original. A teleportation machine would be like a fax machine, except that it would work on 3-dimensional objects as well as documents, it would produce an exact copy rather than an approximate facsimile, and it would destroy the original in the process of scanning it. In 1993 an international group of six scientists, including IBM Fellow Charles H. C.H.

Volunteer placements advertised with Countryside Jobs Service Advertise your volunteer opportunities - it's free. Full or part time placements, subdivided into subject areas, ie the type of work you'll be doing. Regular or occasional requirement, volunteering opportunities are on a separate page Click here. Date of last update: 18/5/15 Adverts posted this week are highlighted in yellow Next update due 26/5/15

CJS Online - countryside, conservation jobs. If you are interested in a particular ad, please respond directly to the advertiser and not to CJS. Please remember to tell advertisers that you saw their advertisement on CJS Online. Save Our Magnificent Meadows Home - One Stop Shopping Initiative… - NASA OEID LaunchPad NASA OSSI Online Career Week The NASA OSSI Online Career Week will connect you with NASA, STEM employers and top graduate programs nationwide. Engage with representatives from all 10 NASA centers to learn about internship, scholarship, and fellowship opportunities available at NASA. Interact with recruiters from top STEM employers, and explore internship and job opportunities in the private sector. Learn about highly ranked STEM graduate programs and network with admissions officers from the comfort of your home, dorm, smartphone or tablet.