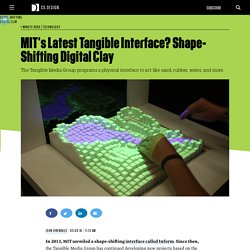 The Step Needed to Make Virtual Reality More Real. If virtual reality is going to be truly immersive, holding a game controller could be distracting. 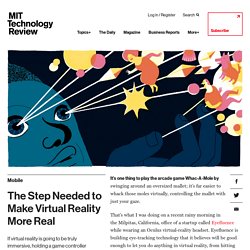 Companies will instead try to let you control the action with your eyes, head, or fingers. Microsoft Researchers Test Multi-Person Mixed Reality. In an example of shared mixed reality, two students see a visual effect as they shake hands. 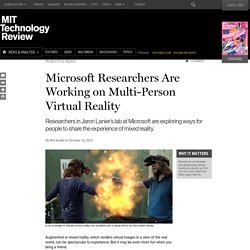 Augmented or mixed reality, which renders virtual images in a view of the real world, can be spectacular to experience. But it may be even more fun when you bring a friend. Researchers in the Microsoft lab of Jaron Lanier are experimenting with multi-person augmented reality, and the results of their work could help shape the way the technology is commercialized and used. Lanier was a pioneer of virtual and augmented, or mixed, reality in the 1980s. Microsoft is testing a commercial augmented reality product, called HoloLens. Project HoloLens: Our Exclusive Hands-On With Microsoft's Holographic Goggles. It’s the end of October, when the days have already grown short in Redmond, Washington, and gray sheets of rain are just beginning to let up. 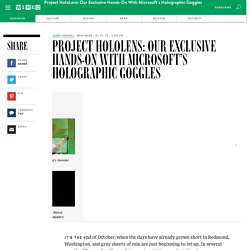 In several months, Microsoft will unveil its most ambitious undertaking in years, a head-mounted holographic computer called Project HoloLens. But at this point, even most people at Microsoft have never heard of it. I walk through the large atrium of Microsoft’s Studio C to meet its chief inventor, Alex Kipman. Click to Open Overlay Gallery. Project HoloLens: Our Exclusive Hands-On With Microsoft's Holographic Goggles. VA's Telemental Health Efficacy Surpasses Face-to-Face Encounters : Current Psychiatry. PHILADELPHIA – The rapidly growing telemental health program of the U.S. 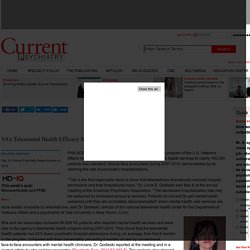 Veterans Affairs health care system delivered more effective mental health services to nearly 100,000 patients than standard, face-to-face encounters during 2007-2010, demonstrated by its slashing the rate of psychiatric hospitalizations. "This is the first large-scale study to show that telemedicine dramatically reduced hospital admissions and total hospitalized days," Dr. Linda S. Godleski said May 6 at the annual meeting of the American Psychiatric Association. "The decreased hospitalization rate may be explained by increased access to services. She and her associates reviewed 98,609 VA patients who required mental health services and were new to the agency’s telemental health program during 2007-2010. These shifts were specific to patients who entered the telemental health program.

In her talk, Dr. Dr. HP Sprout is the most innovative PC in a while [HANDS ON] It's hard to find the words to describe the funky but creative HP Sprout system, but let's give it a go: it's a desktop computer with a projector that scans physical items, turns them digital in a few seconds and allows you to manipulate the images using your fingers. 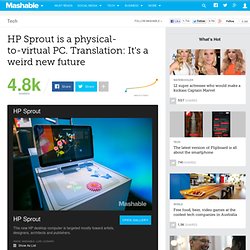 Boiled down: It's a blend of what we already know — the standard computer, letting you check email, surf the web, write documents and so on — with a touch of the future, particularly in the form of having a "touch mat" instead of a traditional keyboard and the ability to instantly make 3D objects into scans. The concept is targeted mostly toward artists, designers, architects and publishers. 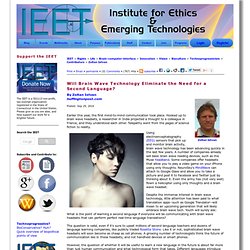 Hooked up to brain wave headsets, a researcher in India projected a thought to a colleague in France, and they understood each other. Telepathy went from the pages of science fiction to reality. Brave New Phone Call. “I live and breathe computer-supported cooperative work — that’s my thing,” he says. 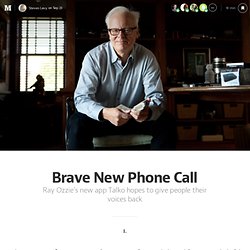 “I love communications tools.” Ozzie first became smitten with this vision at the University of Illinois when, as a sophomore in 1975, he stumbled upon an innovative mainframe computer system called Plato. Created to promote “automated learning,” the inventors had devised a suite of tools that foreshadowed many of the ways that people would use digital technology to communicate and collaborate decades later – electronic mail, texts, games, and even a voice chat program called Talkomatic. The Daqri Smart Helmet Wants to Put Augmented Reality to Work. Seven Amazing Apps for the Oculus Rift That Aren't Games.

The Oculus Rift is setting the standards when it comes to Virtual Reality today, but it's not the only option. 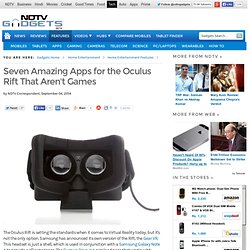 Samsung has announced its own version of the Rift, the Gear VR. This headset is just a shell, which is used in conjunction with a Samsung Galaxy Note 4 to provide a VR experience. The Durovis Drive is a similar device that works with Android and iOS phones. Earlier this year, Google also surprised people by launching what could be the world's cheapest VR headset, Google Cardboard. Finally, Virtual Reality Let Me Fly Like a Bird. I never thought I'd be able to fly. 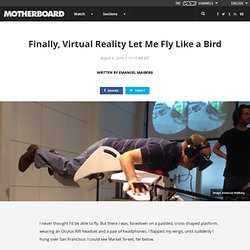 But there I was, facedown on a padded, cross-shaped platform, wearing an Oculus Rift headset and a pair of headphones. I flapped my wings, until suddenly I hung over San Francisco. I could see Market Street, far below. The Myo Motion Control Armband: Hands On. Myo from Thalmic Labs is one of those smart and deceptively simple-looking inventions that has the potential to change the way we work and live. It’s as easy to put on as a traditional armband, but is packed full of technology that lets it track both your hand movements and arm motions, then lets you use those gestures to control virtually anything on your desktop, laptop or smartphone. It's a lot like Iron Man Tony Stark's gesture-controlled holo-computer, but without the super-cool imagery. Myo sounded exciting and when Thalmic Labs unveiled its first demonstration video last year.

Virtual Worlds Enabling Distributed Collaboration. Virtual Worlds Enabling Distributed Collaboration Marko Hakonen, Petra M. Bosch-Sijtsema Abstract Despite the growing prevalence of distributed work as an organizational form, the virtual world literature has largely neglected to consider the potentials of this new media in distributed collaboration. Mobile games used for psychology experiments. (Medical Xpress)—Initial findings from one of the largest cognitive science experiments ever conducted have shown that mobile games can be used to reliably address psychology questions, paving the way to a better understanding of how cognitive function differs across populations.

With its first comprehensive set of results published today, the Great Brain Experiment, a free mobile app run by neuroscientists at the Wellcome Trust Centre for Neuroimaging at UCL, uses 'gamified' neuroscience experiments to address scientific questions on a scale that would not be possible using traditional approaches. The app investigates memory, impulsivity, risk-taking and happiness. By playing the games, anyone can anonymously compare their abilities to the wider population and contribute to real scientific research.

Evangelists predicted in 2006 to 2007 that it would be as big as the web itself, and soon we'd all be living our lives in virtual worlds. It’s Complicated: Tone (and pettiness) in digital communication. The Telephone: A Highly Deficient Technology. Via commons.wikimedia.org. Confpapers/CRPITV150Dean.pdf. Publications. Mezzanine – oblong industries, inc. The future of work is rich in technology and drawbacks. I tried the Rift, and I liked it. Oculus Rift inventor Palmer Luckey was in Cambridge Saturday, at the Microsoft NERD Center, for a recruitment event and mini virtual reality conference. If you couldn’t make it, you missed three different tracks of presentations, running from 3 p.m. to 9 p.m., plus demos of several Oculus Rift games. CastAR Kickstarter. 3D headset space getting crowded. Capitalizing on the excitement generated by the Oculus Rift, several other companies, both big and small, are jumping into the virtual reality headset market.

"Virtual Retinal Display" Does Exactly What Its Name Implies. Reality Check - What Does the Oculus Rift Do To Your Brain? The company that powers Google Hangouts wants to radically disrupt all business videoconferencing. Smartwatches shouldn't look like watches - Jul. 3, 2013. Talk about Timing: Apple's iWatch Patent Arrives. New Implantable Device Can Manipulate and Record Brain Activity. Tin Can. Here’s what the immersive, 3D computer interface of the future will feel like - Quartz. Google Wants to Put a Universal Translator in Every Android Phone. The Atlas looks like the most insane home video-gaming experience ever. Microsoft Kinect used to live-translate Chinese sign language into text. Microsoft Research turns Kinect into canny sign language reader (video)

A Day Made of Glass 2: Unpacked. The Story Behind Corning's Vision. iBrain to allow Stephen Hawking to communicate through brainwaves alone. Inexpensive device could allow the disabled to control computers with their eyes. Mental Scanner Lets Paralyzed People Spell Their Thoughts. 2011 Frontiers of Engineering: The Evolution of Neuroprosthetics.