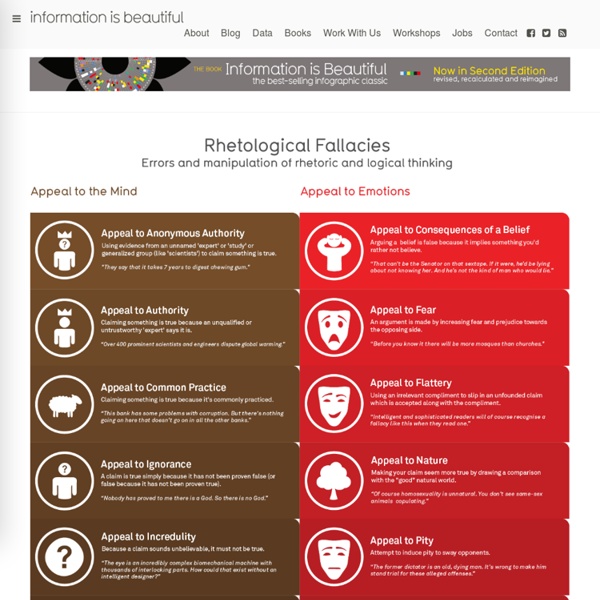 Related:  Logical Fallacies • everything else • think • To Whom It May Concern... • Infographics

Fallacies Dr. Michael C. Labossiere, the author of a Macintosh tutorial named Fallacy Tutorial Pro 3.0, has kindly agreed to allow the text of his work to appear on the Nizkor site, as a Nizkor Feature. 18 Best Movies On Netflix You Haven't Yet Seen As great as Netflix is, finding good movies you haven't yet seen can be a chore. You may have even started believing that you've already seen them all. Rest assured, there is very little chance you have. A Good Movie to Watch suggests movies you haven’t seen, but you should. To do this, we only recommend movies that have received at least a 7 rating on IMDb and a 70% Fresh score on Rotten Tomatoes. This means that these movies have been appreciated by both critics and viewers, so you can trust that they’re awesome.

50 Questions To Help Students Think About What They Think click 2x contributed by Lisa Chesser Using the right questions creates powerful, sometimes multiple answers and discussions. Aristotle said that he asked questions in response to other people’s views, while Socrates focused on disciplined questioning to get to the truth of the matter. Ultimately questions spark imagination, conjure emotions, and create more questions. The questions asked by a teacher or professor are sometimes more glaringly valuable than the information transferred to the students.

Here is Some Legitimate Science on Pregnancy and Rape Trigger warning: discussion of violence against women and graphic mention of miscarriage. So Congressperson Todd Akin of Missouri has said some interesting things. Referring to the possibility of pregnancy after rape, and whether abortion should be allowed in this circumstance, he said according to his understanding “if it’s a legitimate rape, the female body has ways to try to shut that whole thing down,” but that, should one embryo slip through, that “the punishment should be on the rapist, and not attacking the child.” Support for ISIS in the Muslim World - Perceptions vs Reality According to a Brookings report from last January: 40% of Americans believe most Muslims oppose ISIS.14% think most Muslims support ISIS.And 44% (the plurality) of Americans believe Muslim views are evenly balanced on the issue. American perceptions of Muslims’ support for the Islamic State are all over the map. And you only have to search Google for “how many muslims support isis” to see why. The first result shows “81% of respondents support the Islamic State.” The second result, “Most dislike ISIS in Muslim countries

Top 10 Thinking Traps Exposed Our minds set up many traps for us. Unless we’re aware of them, these traps can seriously hinder our ability to think rationally, leading us to bad reasoning and making stupid decisions. Features of our minds that are meant to help us may, eventually, get us into trouble. Here are the first 5 of the most harmful of these traps and how to avoid each one of them. 1. Free Online Voice Generator Free online voice generator. This voice synthesizer tool allows you to enter any text into the box and listen to a computer generated voice speaking the output. Different browsers and operating systems have different voices (typically including male and female voices and foreign accents), so look at the options in the dropdown box to see what voices are available.

Misattributed quotes and their surprising originators In the course of researching the history of emotional intelligence, I stumbled across an origin story that went all the way back to Plato. The classical Greek philosopher apparently wrote, “All learning has an emotional base.” Except that he never said it, according to Christopher Golis, a coach specializing in emotional intelligence. Instead, Golis’s digging unearthed no attribution to Plato before 1997, “after which it’s copied promiscuously in various inspirational/psychological books–never with source identification–and then on to various quotation websites.” It’s easy to see how misinformation like this can spread virally, so I couldn’t help but wonder, do all those inspirational quotes we see liberally hashtagged for #MotivationMonday or #WidsomWednesday really exist? And were they really said by the people we are so quick to believe said them?