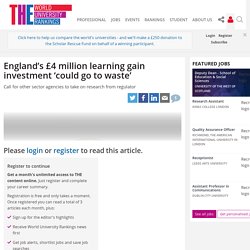 The now-defunct Higher Education Funding Council for England launched 13 pilot projects at more than 70 institutions in 2015, with the aim of finding ways to measure the improvement in students’ skills and competencies over the course of their university study. At the time, it was hoped that the trials – which also included a bid to experiment with national standardised tests – could point to a way of comparing institutional performance that could be incorporated as a new metric into an assessment such as the teaching excellence framework. However, England’s new higher education regulator, the Office for Students, quietly published the evaluations of the learning gain work last month and said that “no further research” was planned.

Carol Evans, professor of higher education at the University of Southampton, agreed. New data track graduates of six popular majors through their first three jobs. Defining the value of a college major is tricky, in part because students typically aren't fully rational when picking one. 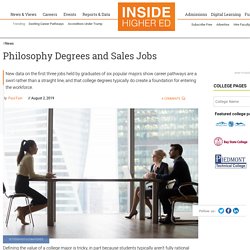 Likewise, career paths are increasingly hard to predict, with a growing number of job changes for graduates looming in the fast-moving knowledge economy and automation also playing a bigger role. New data from Emsi, a labor market analytics firm that is part of the Strada Education Network, sheds light on the career tracks for graduates of six relatively common academic programs, with widely varying levels of perceived applicability to jobs: languages and philosophy, the social sciences, business, communications, engineering, and IT. Not surprisingly, the typical path is more of a swirl than a straight line. What will we take away from learning gain? What did we gain from learning gain? Timeshighereducation. The Society for Research into Higher Education. Standardised tests measuring learning gain fail to make the grade.

A project to measure the learning gain of students at English universities using standardised tests has been scrapped after it failed to persuade enough students to participate. 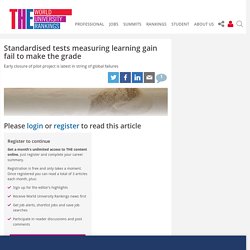 The early closure of the National Mixed Methodology Learning Gain project by the Office for Students is the latest in a series of global attempts to use a cross-disciplinary exam to measure undergraduate progress that have failed to get off the ground. First announced in 2015, the NMMLG formed a key part of the now-defunct Higher Education Funding Council for England’s response to concerns that degree classifications were an insufficient indicator of learners’ progress. Understanding new students’ expectations, experiences and anxieties. Student Outcomes in Higher Education: a global review of definitions, data and performance. In 2018, OBHE will focus on one of the most important higher education questions- how to define, report and evaluate student outcomes. 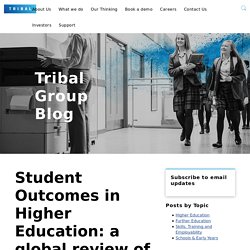 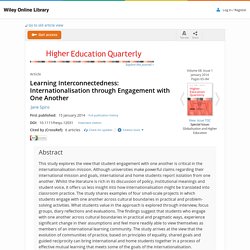 Although universities make powerful claims regarding their international mission and goals, international and home students report isolation from one another. Whilst the literature is rich in its discussion of policy, institutional meanings and student voice, it offers us less insight into how internationalisation might be translated into classroom practice. The study shares examples of four small-scale projects in which students engage with one another across cultural boundaries in practical and problem-solving activities. What students value in the approach is explored through interview, focus groups, diary reflections and evaluations. Evaluating quality learning in higher education: re-examining the evidence: Quality in Higher Education: Vol 20, No 1. Open Lectures in Teaching and Learning. Tuesday, 24th October 17, 5-6pm The lecture will be broadcasted live via this link: You can tweet us your questions/comments using #edlecture These are the confessions of a serial higher innovator thrust into the debate surrounding the determination of teaching excellence. 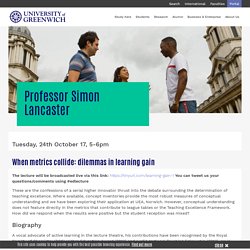 Where available, concept inventories provide the most robust measures of conceptual understanding and we have been exploring their application at UEA, Norwich. However, conceptual understanding does not feature directly in the metrics that contribute to league tables or the Teaching Excellence Framework. Learning gain Spinnaker July 2017. Student Experience SuePrince July2017. DSpace Open Universiteit: Awareness is not enough. Pitfalls of learning analytics dashboards in the educational practice. 1771 - ALT Annual Conference 2017. Randles & Cotgrave 2017. Why Some Students Fail And Other Students Succeed - Illumeably. What separates students who get straight A’s from students who struggle to pass their classes? 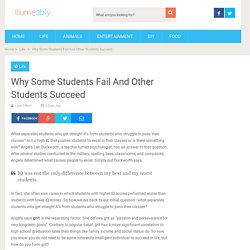 Is it a high IQ that pushes students to excel in their classes or is there something else? Angela Lee Duckworth, a teacher turned psychologist, has an answer to that question. After several studies conducted in the military, spelling bees, classrooms, and companies, Angela determined what causes people to excel. Simply put Duckworth says, Measuring learning gain isn't easy, but it has become necessary. Sway - Error. Our work. We organised a sector-wide conference in February 2015. 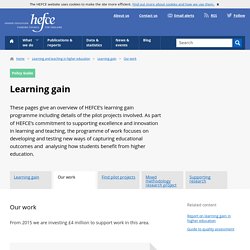 This drew together representatives from universities, sector bodies and international experts from the UK, US, Australia and Italy to explore the issues. The event illustrated that there is a lot that England can learn from experience internationally and emerging practice in the UK. Learning Gain 2016 Speaker Presentations – Inside Government. The Future of Learning Gain in the Higher Education Landscape Tuesday 13th December 2016, Central London *Due to the size of certain files we recommend saving the presentation slides in order for you to open them for later use. 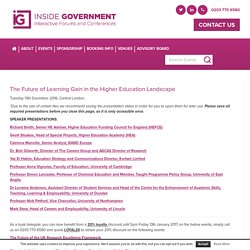 Please save all required presentations before you close this page, as it is only accessible once. Richard Smith, Senior HE Adviser, Higher Education Funding Council for England (HEFCE) Geoff Stoakes, Head of Special Projects, Higher Education Academy (HEA) Indigenous data – why is it important? In a data-driven world, indigenous peoples are becoming increasingly concerned about who owns and represents statistics about indigenous people: that is, who has access to the data, its cultural integrity, and how people’s privacy and autonomy is protected. 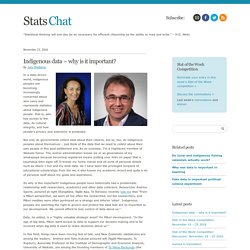 Not only do governments collect data about their citizens, but so, too, do indigenous peoples about themselves – just think of the data that iwi need to collect about their own people in this post-settlement era. As an example, I’m a registered member of Waikato-Tainui. The central administration knows six or so generations of my whakapapa because becoming registered means putting your links on paper that a kaumatua then signs off. It knows my home marae and all sorts of personal details such as where I live and my birth date. As I have been the privileged recipient of educational scholarships from the iwi, it also knows my academic record and quite a lot of personal stuff about my goals and aspirations. LEGACY Seminar June 15 slides. Rienties & Toetenel 2016 computers and edu. Contracts Finder. A longitudinal mixed-method study of learning gain: applying Affective-Behaviour-Cognition framework at three institutions.

Evidence of the month: "Scaling up" learning design. Each month, we highlight one of the new additions to the LACE Evidence Hub, which brings together evidence about learning analytics. You are welcome to add to the Hub site, which you can visit via a tab at the top of this page. HE Research Snippets Archives - YouthSight. This site uses cookies, please see our cookie policy for details. Dismiss X Contact Home » Opinion & News » Opinion » HE Research Snippets. Why TEF must measure employability not employment.

When it comes to metrics, the TEF is all about outcomes. Of course, it’s all open to consultation, but the painfully deliberate avoidance of input measures (such as academic teaching qualifications) suggests that the consultation is about as open as an oyster with rigor mortis. Jo Johnson has chosen three outcomes for the ‘common metrics’ that will form the starting assumptions when it comes to institutions vying for TEF banding. Our obsession with metrics turns academics into data drones. I’m an academic with more than 15 years experience in higher education; my partner works in a state-run nursery school. The age gap between our students is, at the very least, 14 years. Nevertheless, there is one word that unites us: metrics. The desire to measure attainment, progress and calculate “added value” is becoming increasingly pervasive in both of our sectors.

First, universities and science minister Jo Johnson confirmed the election manifesto pledge to develop a teaching excellence framework that, he says, will incentivise universities to focus on teaching quality and so improve student experience. Then, the chancellor’s July budget outlined plans to link the fee cap to inflation from 2017-18 for institutions that can demonstrate high quality teaching.

Remembering the sometimes painful Research Excellence Framework (REF) process a further framework to evidence teaching quality sounds potentially costly and time consuming but Mr Johnson has said he doesn’t want it to be either. Learning gain - Higher Education Funding Council for England. Com rep utlsec 12jun docA. Developing and Assessing the Attainment of Graduate Attributes and Generic Skills Perceived by Undergraduate Students in the Asia-Pacific: A Case Study on the Value Added for Completing a Bachelor’s Degree at the University of Auckland, New Zealand.