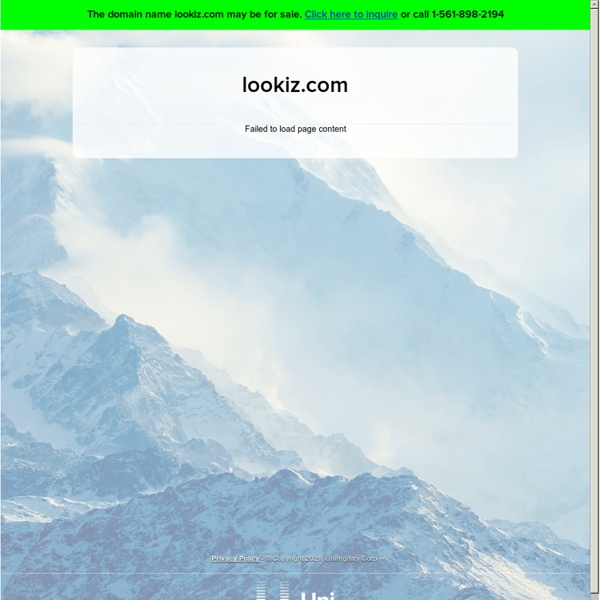 9 Things Every Entrepreneur Needs to Learn From Woody Allen Editor’s note: James Altucher is an investor, programmer, author, and entrepreneur. He is Managing Director of Formula Capital and has written 6 books on investing. His latest book is I Was Blind But Now I See. You can follow him @jaltucher. 15 Jaw dropping Cinemagraphs (Part 2) It’s really fun to see moving things in simple image. As we promised here is the second part of beautiful Cinemagraphs. If you are new on our blog, then you can check our first part of Jaw dropping Cinemagraphs here . Let us know your favorite one among these wonderful Cenemagraphs. This new technique brought by Jamie Beck (fashion photographer) and Kevin Burg (graphic artist and designer). Following Cinemagraphs created by them.

Cinnamon Sugar Pull-Apart Bread I’m sorry. I know it’s Monday morning and you probably came here for some pretty pictures of food that you could glance at, and then move on with your day… and here I go thrusting warm, soft cinnamon sugar bread in your face. It’s not fair. I know it’s not fair. Highly Detailed 3D Characters From Top 3D Artists - 53 Examples Most 3d artists’ portfolios have at least a beautiful woman character in it and it will be no surprise that you’ll find a lot of them here. Now besides the curious gazing at these 3d pictures, you must realize the sisyphean work that is being put in these characters, the long hours to create the render and then applying the high quality texture to get incredible the incredible results illustrated below. Rage Captain Jack Sparrow Transient Princess Alien vs Predator Chess

Jean Simmons and Marlon BrandoDeborah Ke Ingrid Bergman Jean Simmons and Marlon Brando Deborah Kerr Film review: Bright Star "The beginning of your poem has something very perfect," says Keats's lover, Fanny Brawne, of his Endymion – before complaining that the rest of it isn't nearly as good. Tactfully, Jane Campion allows us to understand that this is not so much a criticism of Keats's poetry but his life, in fact all our lives. They are finest at the beginning and careless youth is an Endymion moment, a blaze of perfection and rightness, destined to decay with adulthood's compromises and responsibilities. With this account of John Keats's love affair with Fanny Brawne, played by Ben Whishaw and Abbie Cornish, Campion has made a fine and even ennobling film: defiantly, unfashionably about the vocation of romantic love. She has Whishaw and Cornish actually recite poetry – which, for most actors, is as difficult as walking on your hands or juggling with knives – and even proposes a kind of secular martyrdom for them in the movie's final act.