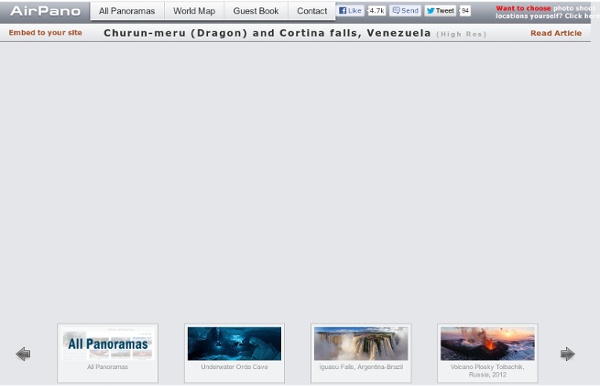 Awesome pictures from around the world Someone sent me these in a chain email, it was horribly formatted. I also do not know who made the comments, or how accurate they are. I take zero credit in the pictures, I just wanted to compile them nicely for all to see. The world’s highest chained carousel, located in Vienna, the height of 117 meters. Image of the Day: Aquarium Phonebooth - Food - GOOD - StumbleUpon Lighting designer Benoit Deseille and artist Benedetto Bufalino transformed this phone booth in Lyon, France, into an aquarium, as part of the city's annual Festival of Light. In an accompanying statement, the artists explain the inspiration behind the piece: With the advent of the mobile telephone, telephone booths lie unused. We rediscover this glass cage transformed into an aquarium, full of exotically colored fish; an invitation to escape and travel. It's a creative way to transform disused infrastructure into an everyday source of wonder and beauty—or, if you're of a more pessimistic frame of mind, a vision of our climate-changed future.

Top 50 Dystopian Movies of All Time Massive dehumanization, totalitarian government, rampant disease, post-apocalyptic terrains, cyber-genetic technologies, societal chaos and widespread urban violence are some of the common themes in dystopian films which bravely examine the ominous shadow cast by future. A dystopia is a fictional society that is the antithesis or complete opposite of a utopia, an ideal world with a perfect social, political and technological infrastructure. A world without chaos, strife or hunger. A world where the individual potential and freedom is celebrated and brought to the forefront. In contrast, the dystopian world is undesirable with poverty and unequal domination by specific individuals over others. Dystopian films often construct a fictional universe and set it in a background which features scenarios such as dehumanizing technological advancements, man-made disasters or class-based revolutions.

A galaxy not so far away: Salt Lake City photographer captures spectacular images of our own Milky Way arched over the pillars and canyons of Utah By Rob Waugh Updated: 17:27 GMT, 7 February 2012 Salt Lake City photographer Royce Bair uses digital cameras and what he describes as a 'copious collection of portable incandescent and flash lighting equipment' to capture his unique views of the night sky over Utah's spectacular canyons. His shots of Wall Street Canyon at Bryce Canyon National Park with the stars of our own galaxy, the Milky Way blazing overhead showcase some of his technique. Bair has been lecturing on night photography for two decades. A photograph of 'Wall Street' canyon at Bryce Canyon National Park on September 20, 2011 in Utah, showing a view across our own galaxy, the Milky Way Stunningly beautiful images capture the glory of the Milky Way taken with a digital camera

Unbelievable and Incredible Staircase&#8230;!! - StumbleUpon Sometimes architects can get a bit carried away. These staircase designs are truly incredible and truly fabulous….!! Some of these have been taken from designer / architecture websites and most of them are unimaginable in the normal thinking. How to Procrastinate and Still Get Things Done - Archives By John Perry I have been intending to write this essay for months. Why am I finally doing it?

The Rubik's Cube Solution How to Solve the Rubik's Cube in Seven Steps The world's most famous puzzle, simultaneously beloved and despised for it's beautiful simple complexity, the Rubiks Cube has been frustrating gamers since Erno Rubik invented it back in 1974. Over the years many brave gamers have whole-heartedly taken up the challenge to restore a mixed Rubik's cube to it's colorful and perfect original configuration, only to find the solution lingering just out of their grasp time and time again. Marvel at the Magnificent Marble Caves [35 PICS] Can you imagine something happening that would endanger these exquisite azure caverns? It might if Chile continues with plans to build five hydro-power dams in Patagonia. Photo #7 by © Jorge Leon Cabello The water has eroded the marble to create cavities and marble caves. There are different color shades, depending on the contents’ impurities.

Beyond Drawing: Creative Colored Pencil Art & Sculpture & Dornob From a very first look at these wonderfully detailed colored pencil sculptures by Jennifer Maestre, it should come as no surprise that her artwork was initially inspired by spiny sea urchins – beautiful be dangerous to the touch. For each sculpture, Jennifer hacks apart hundreds of colored pencils, cores them perpendicular to their length and turns them into beads, essentially, which she then meticulously stitches back together and slowly shapes into solid sculptures. Though her beginnings were with creatures of the water, Jennifer quickly expanded her subject matter to cover other organic objects – from plants and flowers to house pets and more abstract animals. While some of her work has a planned form from the very beginning, other pieces morph and shift as they take shape into something completely unplanned but nonetheless compelling.

46 smart uses for salt How many ways can you use salt? According to the Salt Institute, about 14,000! The salt website has tons of handy tips for using salt around the house, and the best of the bunch — plus my additions — are listed below. I can't think of another more versatile mineral. Salt is the most common and readily available nonmetallic mineral in the world. In fact, the supply of salt is inexhaustible.