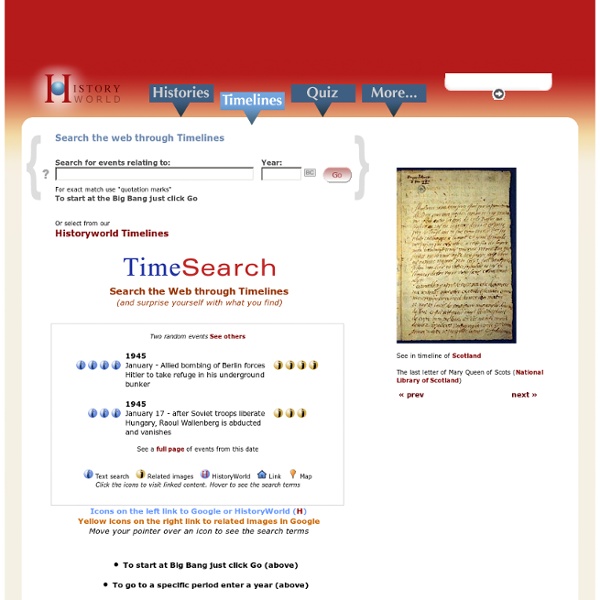 ChronoZoom ChronoZoom is an educational tool for teachers and students who want to put historical events in perspective. A great many resources have been created already in ChronoZoom for your enjoyment and enlightenment. Start Exploring Use ChronoZoom to get a perspective of the extensive scale of time and historical events relative to what happened around the world. Become an author yourself! Simply log on with your social networking credentials to record your unique perspective or tell a story that needs to be told.

Annenberg Media Exhibits: Collapse Hundreds of years ago in what is now modern Honduras, Copán was a thriving civilization, a center of the cultural life of the Maya. Tens of thousands of people made their home in the Copán Valley. Yet despite its importance, Copán went into decline. National Cold War Exhibition January 11 Jan - A ceasefire was announced in Greece between government forces and ELAS guerrillas; this agreement was confirmed by the government on 12 February. 4 Feb - Yalta Conference where Roosevelt, Churchill and Stalin meet to discuss terms of German surrender and the boundaries and governments in post war Eastern Europe. 12 Apr - President F D Roosevelt dies and is succeeded by Harry S Truman. 7 May - The agreement for total and unconditional surrender of the Germans forces was signed at the HQ of the Supreme Commander Allied Expeditionary Force.

Animation: Human Population Growth Over All of History Imagine that for every million people on Earth, there was a single dot on a map. In total, that would be about 7,600 dots – representing today’s global population of 7.6 billion. But, what if we went back in time, and watched those dots accumulate over human history? When and where do the first dots appear, and when does population growth ramp up to get to the billions of people that are alive today? The History of Population Growth Today’s animation comes from the American Museum of Natural History, and it shows over 200,000 years of population growth and the major events along the way. Magna Carta: Cornerstone of the U.S. Constitution At the death of his brother, Richard the Lionhearted, John assumed the throne of England, intent on exercising power to achieve his own selfish ends. To fund military campaigns in France, he extracted exorbitant fees from nobles, who, in turn, raised the rents imposed on their tenants. At the same time, John reduced the lords' customary powers over those tenants, restricting, for example, their power to hold court for those living on their feudal lands. He attempted to influence church elections and confiscated church properties, alienating the powerful ecclesiastical establishment and depriving the poor of the only source of relief available to paupers. He restricted trading privileges traditionally granted to London's merchants and increased their taxes, alienating this constituency as well.

The Lifespan of Ancient Civilizations Detailed in a Handy Infographic: Are We Headed Towards Our Own Collapse? Anyone living in the West today surely feels they've heard quite enough about its decline. (Unless, of course, they're fans of 1980s punk rock.) Given how long civilizations usually outlive individuals, how can an individual grasp the prospects for longevity of the civilization in which they find themselves? stle Builder Image Copyright 1995 by Educational Management Group, Inc. During the Medieval era of history, life was lived by a very different set of political, economic, and social rules. The only form of government was a Monarchy where the king or queen ruled by "divine right." "Divine right" simply meant that God appointed the king or queen to rule with absolute power.

Black History timeline Roman rule in Britain begins. The Numerus Maurorum Aurelianorum, an African auxiliary unit, takes its position on Hadrian’s Wall (c100-c400) as part of the Roman army and helps guard the outermost reaches of the empire. Kingdom of Ghana. A large sub-Saharan state established. Archaeological evidence suggests that Ghana had achieved a high level of civilisation (advanced metalworking, an indigenous trading network) before Arab travellers arrived around AD750. Secrets of Lost Empires Welcome to the companion Web site to the NOVA program "Medieval Siege," scheduled for broadcast on January 24, 2006. In the film, which is a part of the NOVA series Secrets of Lost Empires, a team of timber framers and other specialists design, build, and fire a pair of trebuchets, a devastating engine of war popular in the Middle Ages. Here's what you'll find online: Medieval Arms Race The trebuchet was only the most frightening of the weapons early European warriors employed in siege warfare. They also relied on battering rams, siege towers, tunnels - anything to gain access to a castle.

A Medieval Mystery This lesson is suitable for KS3 History Unit 19: 'How and why did the Holocaust happen?' and could also be used to support Citizenship at KS3 Unit 4: 'Britain - a diverse society?'. The cartoon depicts the profoundly negative way in which Jews were viewed in 13th century England. Life In The 17th Century By Tim Lambert SOCIETY IN 17th CENTURY ENGLAND During the 17th century the population of England and Wales grew steadily. It was about 4 million in 1600 and it grew to about 5 1/2 million by 1700. During the 17th century England became steadily richer.