PiFi – How to Network your Mac music system with the Raspberry Pi and HiFiBerry – Part 1. In my introductory article, Computer audio on the Mac – getting started, I introduced the audiophile new to computer music to ripping and organizing a music library using iTunes on the Mac. 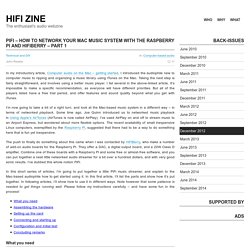 Taking the next step is fairly straightforward, and involves using a better music player. I list several in the above-linked article. It’s impossible to make a specific recommendation, as everyone will have different priorities. But all of the players listed have a free trial period, and offer features and sound quality beyond what you get with iTunes.

I’m now going to take a bit of a right turn, and look at the Mac-based music system in a different way – in terms of networked playback. The push to finally do something about this came when I was contacted by HiFiBerry, who make a number of add-on audio boards for the Raspberry Pi. In this short series of articles, I’m going to put together a little PiFi music streamer, and explain to the Mac-based audiophile how to get started using it. What you need. Computer Audiophile - Geek Speak: Raspberry Pi HiFi Is Here. Over the years I've researched countless software and hardware combinations, based on the Raspberry Pi, for use in HiFi audio systems. 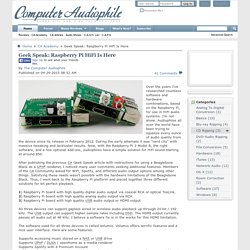 I'm not alone. Audiophiles all over the world have been trying to squeeze every ounce of audio quality from the device since its release in February 2012. During the early attempts it was "nerd city" with massive tweaking and lackluster results. Now, with the Raspberry Pi 2 Model B, the right software, and a few optional add-ons, audiophiles have a simple solution for HiFi sound starting at around $50. After publishing the previous CA Geek Speak article with instructions for using a Beaglebone Black as a UPnP renderer, I noticed many user comments seeking additional features. 1) Raspberry Pi board with high quality digital audio output via coaxial RCA or optical TosLink. 2) Raspberry Pi board with high quality analog audio output via RCA. 3) Raspberry Pi board with high quality USB audio output or HDMI output Requirements Device 3 - USB or HDMI output . Sarris DIY Tube Amps & Speakers. 807 Sarris SET AMP.

807 parallel SE amplifier In the summer of 2002 I decided to build a pair of mono block parallel single ended DIY tube amps, using the 807 tube. 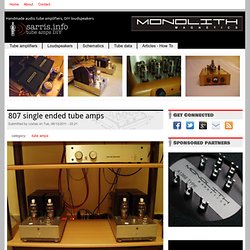 Actually, that was my third DIY tube amplifier project. It all started with my decision to use the less known tube 807 , a tetrode whose features and sounds I was well aware of, from a specific DIY project (with one tube per channel wired in triode) made by Christos Spathopoulos. Christos’ tube 807 amp played very smoothly in the whole spectrum (perhaps the best sound I had heard until then ) but, unfortunately, it lacked power. The Williamson 807 Tube Amp. Details Published: Monday, 07 September 2009 19:39 Written by Super User In this article Brendon Lee Leads us through his build of a classic amplifier design, the Williamson 807. 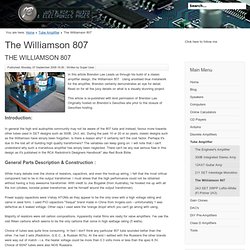 Using anodised blue metalwork for the amplifier, Brendon certainly demonstrates an eye for detail. Read on for all the juicy details on what is a visually stunning project. This article is re-published with kind permission of Brendon Lee. Introduction: In general the high end audiophile community may not be aware of the 807 tube and instead, favour more towards other tubes used in SET designs such as 300B, 2A3, etc. General Parts Description & Construction : While many debate over the choice of resistors, capacitors, and even the hook-up wiring, I felt that the most critical component had to be in the output transformer. Power supply capacitors were Vishay ATOMs as they appear to be the only ones with a high voltage rating and came in axial form. Majority of resistors were old carbon compositions. 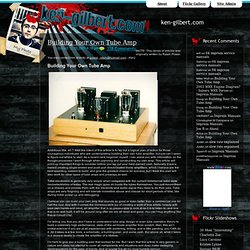 You may contact him directly at power_ralph@hotmail.com --Ken] Ambitious title, eh ? Well the intent of this article is to lay out a logical plan of action for those courageous individuals who are contemplating building their own tube amplifier, but just can’t seem to figure out where to start. As a recent rank beginner myself, I can assist you with information on the thought processes I went through when planning and constructing my own amp. Tube electronics is generally very simple when compared with the current commercial solid-state microelectronics of today. I believe you can build your own amp that sounds as good or even better than a commercial one for half the cost. I’m telling you that you don’t have to understand tube amp design or even tube operation theory to build a extremely high performance, state-of-the-art triode amplifier from scratch. Deciding what kind of amp to build.