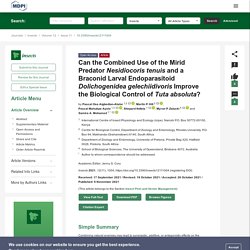 Although N. tenuis preferentially feeds on T.absoluta eggs, it is also recorded as a predator of first and second instar larval stages. Dolichogenidea gelechiidivoris preferentially seeks these early larval stages of T. absoluta for oviposition. The occurrence of intraguild predation between N. tenuis and D. gelechiidivoris and the consequences on the oviposition performance of D. gelechiidivoris were investigated in the laboratory. ►▼ Show Figures Figure 1 This is an open access article distributed under the Creative Commons Attribution License which permits unrestricted use, distribution, and reproduction in any medium, provided the original work is properly cited. INSECTS 22/10/21 Occurrence of the South American Tomato Leaf Miner, Tuta absoluta (Meyrick) in Southern Shan, Myanmar. The South American tomato leaf miner, Tuta absoluta (Meyrick) (Lepidoptera: Gelechiidae), one of the most important invasive insect pests affecting tomato production worldwide, was for the first time detected in Myanmar. 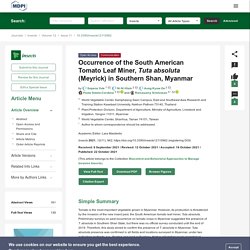 The highest T. absoluta infestation was recordedat Kalaw with (82%), followed by Inle Lake (i.e., floating cultivation) (20%) and Pin Ta Ya (10%). ►▼ Show Figures Figure 1 ►▼ Show Figures Figure 1. PLOS 07/08/15 Identification and Risk Assessment for Worldwide Invasion and Spread of Tuta absoluta with a Focus on Sub-Saharan Africa: Implications for Phytosanitary Measures and Management. Abstract To support management decisions, molecular characterization of data and geo-reference of incidence records of Tuta absoluta (Meyrick) (Lepidoptera: Gelechiidae) were combined with data on the biology and ecology of the pest to estimate its climatic suitability and potential spread at regional and global scale. 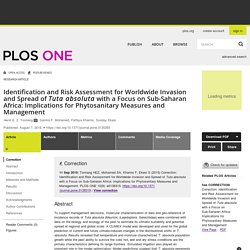 A CLIMEX model was developed and used for the global prediction of current and future climate-induced changes in the distributional shifts of T. absoluta. Results revealed that temperature and moisture characterized T. absoluta population growth while the pest ability to survive the cold, hot, wet and dry stress conditions are the primary characteristics defining its range frontiers. Simulated irrigation also played an important role in the model optimization. Model predictions suggest that T. absoluta represents an important threat to Africa, Asia, Australia, Northern Europe, New Zealand, Russian Federation and the United States of America (USA). 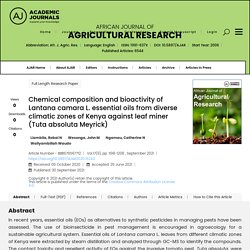 The use of bioinsecticide in pest management is encouraged in agroecology for a sustainable agricultural system. Essential oils of Lantana camara L. leaves from different climatic zones of Kenya were extracted by steam distillation and analyzed through GC-MS to identify the compounds. The contact toxicity and repellent activity of EOs against the invasive tomato pest, Tuta absoluta, were tested. The toxicological assays were performed following the leaf-dip bioassay protocol, while the repellency activity was performed using the repellent response method for phytophagous pests and the data analyzed using the ANOVA test. 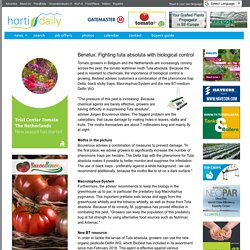 Because the pest is resistant to chemicals, the importance of biological control is growing. Biobest advises customers a combination of the pheromone trap Delta, black sticky traps, Macrolophus-System and the new BT-medium Delfin WG. "The pressure of this pest is increasing. Because chemical agents are barely effective, growers are having difficulty in suppressing Tuta absoluta", adviser Jurgen Bouveroux states. The biggest problem are the caterpillars, that cause damage by making holes in leaves, stalks and fruits. Moths in the picture Bouveroux advises a combination of measures to prevent damage. 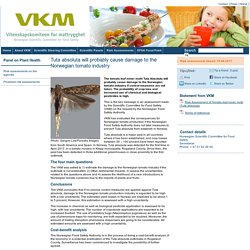 Tuta absoluta is a major pest in all countries where it has been established, and crop losses between 50 – 100 procent have been reported from South America and Spain. In Norway, Tuta absoluta was detected for the first time in April 2017, in a tomato nursery in Klepp municipality, Rogaland County. The four main questions Conclusions. SCIENTIFIC AMERICAN 04/02/15 Invasion Of The Tomato Leaf-Miner. Editor's Note: Kelly Izlar is a Guest Contributor to Food Matters Darth Vader. 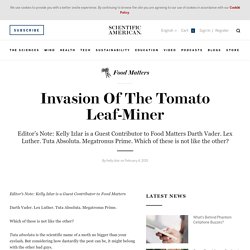 Lex Luther. Tuta Absoluta. Megatronus Prime. Which of these is not like the other? Tuta absoluta is the scientific name of a moth no bigger than your eyelash. T. absoluta has a voracious appetite, and its favorite food is tomatoes. Illustration by Steven White: sketchysteven.tumblr.com. A female leaf-miner will lay about 260 eggs in a lifetime, which is 30-40 days. So what? T. absoluta has been known to reduce crop yields by 80-100% on tomato farms. Muni Muniappan, the director of the Virginia Tech-led Integrated Pest Management (IPM) Innovation Lab, has made the fight against this invasive pest his personal crusade. The IPM Innovation Lab, funded by the U.S. Illustration by Steven White: Hailing from South America, this pest hitched a ride across the Atlantic in 2006, showing up first in Spain, and then spreading through most of Europe, the Middle East, and North Africa.

SCIENTIFIC AMERICAN 04/02/15 Invasion Of The Tomato Leaf-Miner. The views expressed are those of the author and are not necessarily those of Scientific American. 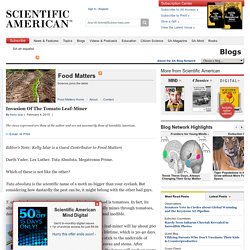 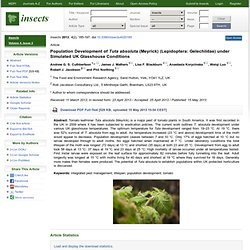