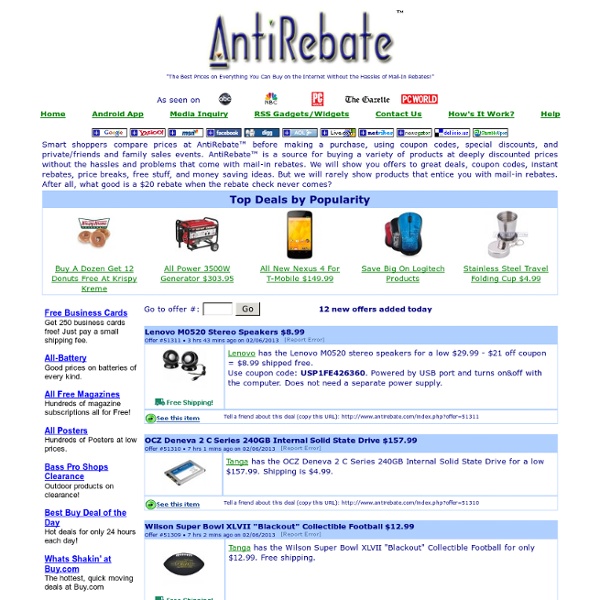 Related:  A Little of Everything, Need to Sort • SHOPPING

30 Useful (and Unknown) Web Apps You Need to Bookmark - Page 6 We'll wrap up this list with 5 web apps that aren't exactly unknown, but are so awesome they still deserve to be included: Gmail As far as web apps go, it’s hard to get more famous than Gmail, the favorite webmail client of the technologically in-the-know. When it launched, it was immediately famous for its immense storage provisions (1 GB at a time when Hotmail offered a whopping 2 MB of storage), revolutionary thread-based email display, and controversy surrounding the privacy ramifications of advertisements based on your emails’ contents. Now, the novelty’s worn off, but Gmail is still best webmail client around. Meebo If you’ve ever used omni-IM service Digsby, you know that its greatest feature is the ability to log in to all your IM accounts from any computer with Digsby installed. Pandora No list of webapps is complete without everyone's favorite internet radio service, Pandora. Remember The Milk Remember The Milk is an online to-do list app, with a remarkably convenient interface.

Mycoted newegg Gift Card Exchange - Buy, Sell, Swap - Free Shipping - Plastic Jungle We are holding this card for you while you shop We are holding these cards for you while you shop The reservation timer has expired. You have one minute to go to the Checkout with credit card or Checkout with PayPal page. In one minute your shopping cart will be emptied and the card(s) will be made available to other customers. Once you are in the checkout page you will have 5 additional minutes to complete the process. The checkout timer has expired. Your shopping cart has expired.

How to Use 43 Folders A very simple guide to leaving here quickly so you can get back to making something awesome. Ask yourself… Why am I here right now instead of making something cool on my own? This is not an insult or put-down. What Sucks? Looking for specific answers to what sucks for you today? More ideas Still sucking? Still Lost? Try a mental sweep, do a shitty first draft, or consider a modest change. Maybe just get away from the computer for a while by taking a nice walk. How to Know When You’re Done Here You’re done here whenever you’ve found just enough information to get you back on track for today. We love having you visit with us here, and we hope you’ll return many times — whenever you think we might have something that might help you get over the hump. The Only “Productivity” That Matters The best advice we can offer is to just put your head down, push yourself harder, and try to figure out what you need to change today to get a little better.

Johnny Chung Lee - Projects - Wii As of June 2008, Nintendo has sold nearly 30 million Wii game consoles. This significantly exceeds the number of Tablet PCs in use today according to even the most generous estimates of Tablet PC sales. This makes the Wii Remote one of the most common computer input devices in the world. It also happens to be one of the most sophisticated. It contains a 1024x768 infrared camera with built-in hardware blob tracking of up to 4 points at 100Hz. This significantly out performs any PC "webcam" available today. Any software on this page is primarily meant for developers and may not run without proper the development tools installed. NOTE: For most of these projects, you don't need the Nintendo Wii console. Coming Later: 3D tracking, and more.... Unfortunately, time constraints in the next couple of months have significantly reduced my ability to work on more projects.

Geek Toys, Office Toys, Stress Balls, Cool Gadgets & Desk Toys at KlearGear.com quibida Geek Genius: How To Get The Latest Gadgets Without Breaking The Bank photo: Harshit Sekhon Tired of spending big bucks every time Apple (AAPL) releases a new version of your go-to gadget? (Hint: this happens every year). Then stop. It’s easy to save on everything, from cell phones to laptops, if you know where to look. Here are five ways to find discounts on all the gadgets you want: RedLaser Bargain hunters swear by RedLaser, a free application for iPhone and Android phones that scans item bar codes to find the merchant that sells it at the lowest price. ChinaBuye Where can you get a laptop for under $100? NexTag You’ve probably heard of NexTag, a price comparison site that now boasts 30 million users. Games Tester Loan Processing Specialist Sarah Horton knows a thing or two about saving money. Property Room Between drug busts and other police seizures, a whole lot of ownerless, high-ticket items end up in police custody. Shane Snow is Editor-in-chief of Contently.com, which contributed this post exclusively for Mint.

Related:
Related:  A Little of Everything, Need to Sort   -  SHOPPING