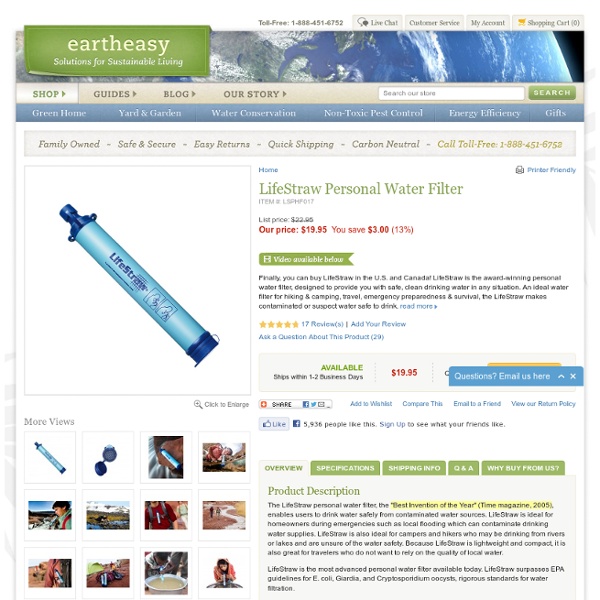 The LifeStraw personal water filter, a "Best Invention of the Year" (Time magazine) winner, enables users to drink water safely from contaminated water sources. LifeStraw is ideal for homeowners during emergencies such as local flooding which can contaminate drinking water supplies. LifeStraw is also ideal for campers and hikers who may be drinking from rivers or lakes and are unsure of the water safety. Because LifeStraw is lightweight and compact, it is also great for travelers who do not want to rely on the quality of local water. LifeStraw is the most advanced personal water filter available today. Eartheasy is the official wholesale distributor and retail launch partner for LifeStraw, which is now available for US and Canadian customers to purchase. Features & Benefits For every LifeStraw® water filter sold, we provide a child in Africa with clean water for an entire school year. Eartheasy's goal is to provide clean water to 500 schools in Kenya in 2014. Bacteria removed include:

The Picador Book of Journeys: Amazon.co.uk: Robyn Davidson Amazon Review Robyn Davidson's selection of travel writing for Journeys: An Anthology is absolutely peerless. The travel writing anthology is a genre that has produced some spectacularly entertaining work (and it has to be said, some fairly workaday stuff). If one were looking for an anthology of evocative travel writing from some of the greatest writers ever to put pen to paper (leavened with contributions from some of the most stellar talents of our own time), this one will be hard to beat. What about Vincent Van Gogh, Marcel Proust and Ernest Hemingway rubbing shoulders with Hunter S Thompson, Gore Vidal and V S Naipaul? Or Simone de Beauvoir and Doris Lessing contrasted with Bruce Chatwin and Joseph Conrad? Book Description

Gnawa music Gnawa musicians performing in a street in Morocco Gnawa music is a rich repertoire of ancient African Islamic spiritual religious songs and rhythms. Its well preserved heritage combines ritual poetry with traditional music and dancing. The music is performed at 'Lila's', entire communal nights of celebration, dedicated to prayer and healing, guided by the Gnawa Maalem and his group of musicians and dancers. The word 'Gnawa', plur. of Gnawi, is taken to be derived from the Hausa-Fulani word "Kanawa" for the residents of Kano, the capital of the Hausa-Fulani Emirate, which was a close ally of Morocco for centuries, religiously, economically, and in matters of defence. Gnawa music is one of the major musical currents in Morocco. Music[edit] In a Gnawa song, one phrase or a few lines are repeated over and over, so the song may last a long time. Gnawa music is characterized by instrumentation. Rituals[edit] Gnawas perform a complex liturgy, called lila or derdeba. Gnawa music today[edit]

Click and go: the best travel websites ever | Travel Fabulous accommodation holidaypad.net If you want to stay in a flying-saucer-shaped cabin in Wisconsin, a windmill on Santorini or a house in the Lake District that featured on Grand Designs, Holiday Pad will sort you out. You can't book directly, so think of it more as inspiration, with links to the websites of unique, unusual places to stay across the globe. i-escape.com We probably mention this lip-smacking site most weeks, but it is our first port of call for gorgeous boutique accommodation around the world. tablethotels.co.uk The site for globetrotters who like a teeny bit of glamour, specialising in boutique/ luxury hotels. welcomebeyond.com For a property to make it on to this site it needs to be architecturally interesting and something of an interior design delight. sawdays.co.uk All the quaint and lovely places to stay in 17 countries, from the popular guidebook range. Camping campinmygarden.com The concept is simple: people offer their gardens for you to camp in. Cheap flights

Volunteer South America; Volunteer Abroad for Free Baliem Valley - Independent Trekking - Lonely Planet travel forum I've spent almost two weeks talking with the guides and locals and wandering around in the mountians alone. Here's what I've learned. Maps The Japanese guy who runs the internet cafe (Papua.com) sells a half decent map of the area. Trails The main trekking area is southeast of Wamena. Please remember that these are only the villages that I was told about. Trails in the north At Ugem, there are two ways to go: you can either go through Hitugi and Yuarima in the north or through Userem and Syokosimo in the south. Kurima --> Polima --> Ugem --> (Hitugi --> Yuarima or Userem --> Syokosimo) --> Yogosen --> Kiroma --> Wonggul --> Elite Mountain Pass --> Abiange --> Peliam I know that you can stay at Hitugi, Userem, Sykosimo, Yogosen, and Kiroma. Trails in the south The first day out of Kurima is tough because there are a massive amount of trails so be sure to ask for directions all the time. I know you can sleep at Tangma, Wamerek, Wesegalep, Bukam, Werima, Soba and Silakma. Possible Treks Gifts

Edgelands: Journeys into England's True Wilderness by Paul Farley and Michael Symmons Roberts – review | Books | The Observer Other nations have their deserts, jungles and tundra, but where is Britain's wilderness? Our countryside has been carefully shaped by human hand. Even our apparently untamed moorlands owe their character to the demands of sheep, deer and grouse production. Yet over the past decade, we have come to recognise a jungle of our own, lurking in the unlikeliest of places. Both our urban and rural landscapes may be intensively managed, but between them a strange no-man's-land has grown up. Vast in total area, but somehow unnoticed, it is a mess of scattered wasteland, unkempt shrub and frayed grassland, randomly littered with the unloved infrastructural organs of our frantic society. In 2002, this newfound terrain was christened "the edgelands" in a book called Remaking the Landscape: The Changing Face of Britain, edited by Jennifer Jenkins. The first real literary attempt to capture the essence of the idea was Iain Sinclair's London Orbital, an evocative account of a journey round the M25.

travelindependent Use a ‘Fake’ Location to Get Cheaper Plane Tickets I can’t explain airline pricing but I do know some plane tickets can be cheaper depending on where you buy them or, even better, where you appear to buy them from. This is all about leveraging foreign currencies and points-of-sale to your advantage. For reasons I never quite understood, every time I tried to book a domestic flight in another country, the prices were always exorbitant. But, say, once I was in Bangkok, that same flight that was once $300 would fall to $30 almost inexplicably. This phenomenon is because a ticket’s point-of-sale—the place where a retail transaction is completed—can affect the price of any flight with an international component. Most people don’t know there is a simple trick for “changing” this to get a cheaper flight on an airline’s website; it’s how I managed to pay $371 for a flight from New York to Colombia instead of $500+. Unsurprisingly, Kayak takes a U.S. Where to change point-of-sale in Google ITA. Prices shown in Colombian pesos. I search again.