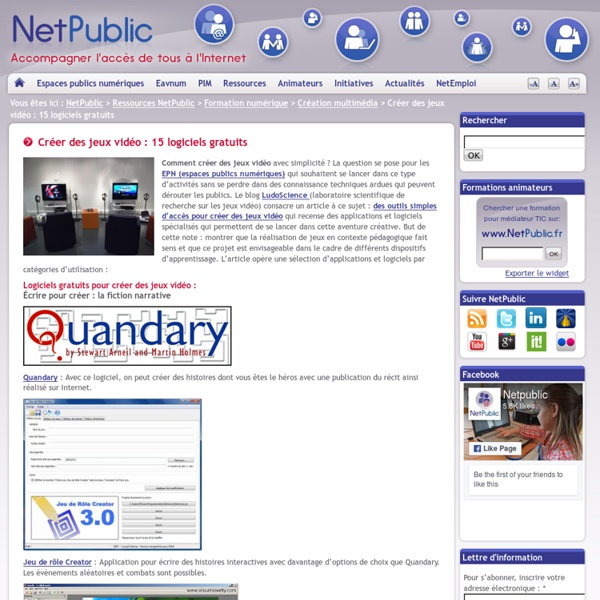 scripting:tutorials:hello_world [Physion] Introduction This the classic “Hello World” example. Create a new file (or scene if you prefer) This is done through the app object: app.newFile(); Create a rectangle item LearningApps.org - interactive and multimedia learning blocks Cloze text Provide the cloze text here. Use -1-, -2- etc. as placeholders for the clozes within the text. You can use the same placeholder multiple times. Educational Technology and Mobile Learning: 10 Great iPad Apps for Creating Concept Maps October 17, 2014, After the list of the web based tools for concept mapping, we went ahead and compiled another list for iPad users. We have included the best apps out there for brainstorming and concept mapping which you can use on the go . We hope you like this selection and if you have other good suggestions to add to this list, please share with us in the comment form below. Enjoy

Create Your Own Game Real-world examples of how Sketch Nation is used in the classroom: If you want us to add or remove a link to your blog post or tweet, please email us at info@engineousgames.com Game Design as Part of an Integrated Project6th grade students used Sketch Nation in a special project: Students created their own game, wrote promotional materials, designed a logo and title, created advertising materials (poster, video and blog post), then presented and marketed their games to the 5th grade class. 5B become iPad game developers!Blog post and video of Davyhulme Primary School students using Sketch Nation to present what they learned about the book “Kensuke’s Kingdom”. Creating dinosaur gamesYear 3 students using Sketch Nation to show what they know about the times of the dinosaurs to design a dinosaur game.

scripting:introduction [Physion] Physion scripting is based on the ECMAScript scripting language, as defined in standard ECMA-262. Microsoft's JScript, and Netscape's JavaScript are also based on the ECMAScript standard. For an overview of ECMAScript, see Qt's ECMAScript reference. With Physion scripting you can do the following: Getting Started Checklist To use the gogoboard, you should have the following things ready. A GoGo Board together with a USB cable. Batteries or power adapter if using motors. Although the gogoboard can be powered via the USB cable, it is not recommended for use with motors, as the USB port provides only limited power.Some sensors and/or motors.Construction materials such as cardboard paper, wood, ice-cream sticks, string, etc.A computer running any recent version of Windows (Windows 2000 and older have not been tested).

Programming options for kids Cult of Mac has an item about a six-year-old girl named Lim Xin Mei (above) who is learning computer programming. The article says she was using Applesoft BASIC on an old Apple II GS. Later she started using a Power Mac 7200 running an Apple II GS emulator. My 8-year-old daughter likes to write games using Scratch, but I think I should introduce her to a text-based programming language. I thought BASIC would be good language to start with, but then I realized I just wanted to do that because that's how I started programming decades ago. Times have changed.

Enchanting : Enchanting : Enchanting Enchanting Cards in Multiple Languages Enchanting cards are now available in: Thank you, translators, for your hard work! Enchanting v0.2 is out! Jul 9, 2014 - Enchanting v0.2.4.3 is out and now includes an updated Spanish translation. Build Your Own Mini Mars Rover With These Brilliant, NASA-Approved Blocks The littleBits Space Kit is a box of Lego-like components that allow anyone to conduct NASA-approved experiments. littleBits You can build miniature, but functioning, versions of NASA’s famous machines like this satellite. Or a Mars rover, which uses a remote trigger module to control the robot from any remote.

Elementary - NEW! WeDo 2.0 Make science come to life Your second- through fourth-graders can gain a deeper insight into science when you use WeDo 2.0 to create engaging, high impact lessons. The hands-on tools encourage pupils to get involved in science exploration by asking questions, analyzing data and communicating their findings, while the curriculum pack covers real science practices linked to the Next Generation Science Standards, including gathering evidence, carrying out investigations and designing prototypes. The core set comes with a programmable Smarthub, motor, two sensors and 280 building elements, plus software which includes one Get Started Project, delivering an introductory experience to the resource. Try the WeDo 2.0 software for free

ScratchX What is ScratchX? ScratchX is a platform that enables people to test experimental functionality built by developers for the visual programming language Scratch. What's the difference between Scratch and ScratchX? Scratch is a programming language and online community where you can create your own interactive stories, games, and animations.