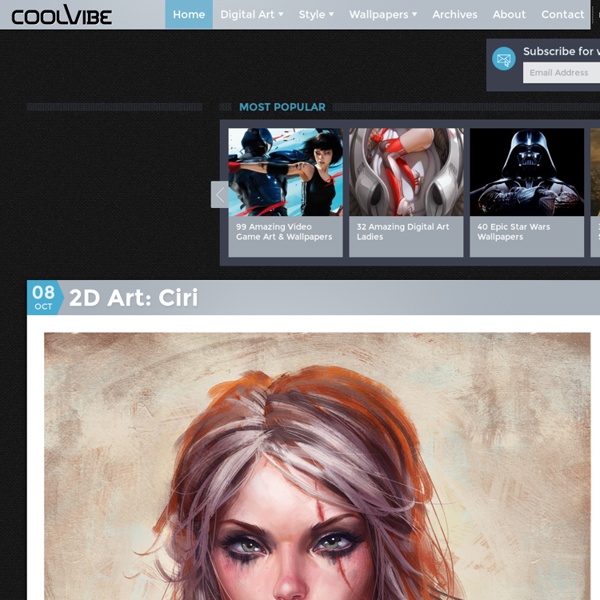 30 Unusual and Incredible Surreal Artworks Today, we bring a collection of the most meaningful and conceptually creative surreal artworks. Surreal Art has now become a very familiar medium of art and it is growing continuously in its popularity because in this medium of art, artist has much more room to show his creativity and convey his feelings and way of thinking to his audience. Here is a collection of 30 very conceptual and momentous Surreal Artworks for you. We are very much sure you will be inspired and enthused by this attractive surreal art collection. Hope you all will enjoy this post. Feel free to share your feeling about this post with others.

A Home For Media Artists Zhou Fan by okmarzo November 30, 2016 Digital Art Visualisations by Diego Querol Check this stunning sunny studio digital visualisation done by Diego Querol. Follow this link to find out the process behind this work Digital Art of Grégoire A. Meyer London-based artist Grégoire A. 24 Great Niche Galleries CSS galleries can be a great source of inspiration, but if you’re looking for something in particular they can be a bit of a nightmare. They can also be a little repetitive, you’ll often find the same design repeated on many of the galleries. Since niche galleries have a tighter focus it allows them to be more detailed when adding sites to the gallery, and although they don’t update as often the quality usually makes up for it.

Hajime Sorayama Official Sorayama started his illustration career in Tokyo painting Sexy Robotic forms, objects and pin-up. Intrigued by the effects of light on various metallic surfaces, and always ready for challenges to his technique and imagination, Sorayama began to produce a series of female robotic figures in the late 1970¹s; anatomically correct in form, but appearing to have been fashioned of molten silver. The term "Sexy Robot" was coined to describe them. In 1993 George Lukas' visual effects director Mark Dippe, of Star Wars fame / Industrial Light and Magic (ILM) was the first to invite Sorayama and his art into North America. This to speak before Mr. Lucas' professional technical movie making staff.

Brilliant Satirical Artwork by Pawel Kuczynski May 10, 2012 Pawel Kuczynski is a Polish artist that specializes in satirical illustration. Born in 1976 in Szczecin, Poland, he graduated with a graphics degree from the Fine Arts Academy in Poznan. Pawel has been focusing on satire since 2004 and has garnered nearly a hundred prizes and distinctions since then. Much of his artwork deals with serious themes such as poverty, greed, politics and mortality. While his subject matter is stark, his illustrative style is whimsical and cartoonish. ImagineFX Whether you're a professional artist, an art student or just create art for a hobby, each page of ImagineFX is filled with unrivalled advice from our team of world-famous artists who bring you bespoke, in-depth digital and traditional art workshops, tips and techniques. Subscribe to ImagineFX We're the only magazine dedicated to fantasy and sci-fi digital art.

The Art of Sung Jin Kim Check out some impressive photo realistic, albeit very suggestive paintings by Korea’s Sung Jin Kim. More after the jump. Calendar 2012 by Irina Vinnik With the new year approaching, I am excited to represent a new Calendar. This limited edition of the yearbook called “The Eyes of Imagination” is a deep insight into my intangible imaginary world, which I’ve tried to perceive & depict. Each page portrays the spirit of the month as I see it. All of these drawing were created in 2011 and you might have already seen some of them in my sketchbook – it’s my annual report for those who love my paintings. Official website Популярные фото / 500px Notifications See all notifications All categories A Frenchman In NY Sean Archer Георгий Чернядьев (Georgy Chernyadyev)

3dmotive Speedboat Modeling Series Speedboat Modeling Series In this series we're going to create a hydroplane speedboat using mostly splines and polygons as our modeling method. From there we will be UV-ing, texturing, and taking it into Keyshot for rendering. $ 39 Learn More Physics Pile in 3ds Max In this course, we're going to jump into using MassFX within 3ds Max to create a bone pile mesh that has been generated via a dynamic simulation Stunning Art Of Digital Artist Kerem Beyit While browsing i came across interview of an amazing digital artist Kerem Beyit on PSDTuts. Interview was really informative and creative work of Kerem Beyit was stunning. Kerem Beyit is from Turkey and currently working as a freelancer.

Paintings by Lou Ros Self-taught artist Lou Ros began his career by tagging walls and buildings with friends at the age of 17. Now 26, he’s exhibiting his paintings worldwide with no less than seven upcoming group and solo exhibitions in Miami, New York, Paris and elsewhere. Some of the pieces above are from his Faces series, many of which were shown at an exhibition earlier this spring at Tache Gallery. (via art fixx)