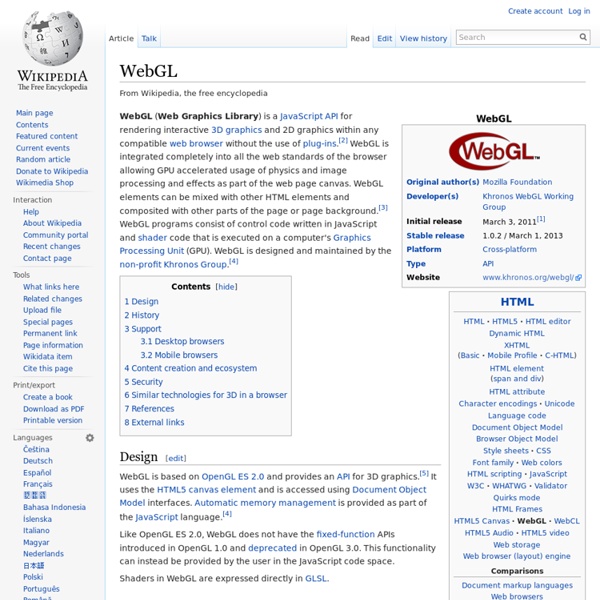 Design[edit] Like OpenGL ES 2.0, WebGL does not have the fixed-function APIs introduced in OpenGL 1.0 and deprecated in OpenGL 3.0. This functionality can instead be provided by the user in the JavaScript code space. Shaders in WebGL are expressed directly in GLSL. History[edit] WebGL evolved out of the Canvas 3D experiments started by Vladimir Vukićević at Mozilla. In early 2009, the non-profit technology consortium Khronos Group started the WebGL Working Group, with initial participation from Apple, Google, Mozilla, Opera, and others.[4][8] Version 1.0 of the WebGL specification was released March 2011.[1] As of March 2012, the chair of the working group is Ken Russell. Early applications of WebGL include Google Maps and Zygote Body.[9][10] More recently[when?] Development of the WebGL 2 specification started in 2013.[12] This specification is based on OpenGL ES 3.0. Support[edit] WebGL is widely supported in modern browsers. Desktop browsers[edit] Mobile browsers[edit] Security[edit]

List of 3D graphics libraries 3D graphics have become so popular, particularly in video games, that specialized APIs (application programming interfaces) have been created to ease the processes in all stages of computer graphics generation. These APIs have also proved vital to computer graphics hardware manufacturers, as they provide a way for programmers to access the hardware in an abstract way, while still taking advantage of the special hardware of any specific graphics card. The first 3D graphics framework was probably Core, published by the ACM in 1977. Low-level 3D API[edit] These APIs for 3D computer graphics are particularly popular: JavaScript-based API[edit] WebGL is a JavaScript interface for OpenGL-ES-2.x API, promoted by Khronos. High-level 3D API[edit] There are also higher-level 3D scene-graph APIs which provide additional functionality on top of the lower-level rendering API. JavaScript-based engines[edit] There is more interest in web browser based high-level API for 3D graphics engines. Away3D

Interactive 3D Graphics Course With Three.js & WebGL When does the course begin? This class is self paced. You can begin whenever you like and then follow your own pace. It’s a good idea to set goals for yourself to make sure you stick with the course. How long will the course be available? This class will always be available! How do I know if this course is for me? Take a look at the “Class Summary,” “What Should I Know,” and “What Will I Learn” sections above. Can I skip individual videos? Yes! How much does this cost? It’s completely free! What are the rules on collaboration? Collaboration is a great way to learn. Why are there so many questions? Udacity classes are a little different from traditional courses. What should I do while I’m watching the videos? Learn actively!

Consortium | Open Standards for Real-Time 3D Communication The German 3D software developer Bitmanagement Software GmbH who are in the board of directors of the Web3D Consortium in Mountain View, California, USA has released the new authoring tool "BS Content Studio", which enables a wide audience to create interactive and Internet ready 3D content. This tool will sustainable accelerate and simplify the work-flow and time necessary to compose, animate and optimize 3D models and interactive content for the web and standalone applications. Even "non 3D specialists” can be now in the position to generate 3D real-time applications easily. The "BS Content Studio" Tool addresses a horizontal market and has been developed around the Web3D ISO standard X3D with the goal to enable a broad range of application domains including CAD, GIS, games, process automation, 3D printing, virtual catalogs, 3D marketing banners, configurators, product visualization, automation, augmented reality, stereo TV content, social communication and many more.

Interactive 3D graphics for the Web, at last Up until now, it is claimed, interactive 3D graphics have not been available on the World Wide Web, even though "almost all PCs as well as mobile and embedded devices already contain high-performance 3D graphics hardware to process it." Two development groups have teamed up to change that. In a joint press release published at Phys.Org, the German Research Center for Artificial Intelligence and Fraunhofer Institute for Computer Graphics Research report they "are working to describe computer scenes in spatial detail directly within the websites’ code." The two teams report they have agreed on a common proposal to extend the Hypertext Markup Language (HTML) to include advanced graphics capabilities. The two institutes originally each had their own proposals, namely X3DOM and XML3D, but say they are now distilling their technologies into common components to bring interactive and highly dynamic 3D graphics to the declarative world of HTML. (Photo by Joe McKendrick.

WebGL powers 3D virtual world on the Web One of the obstacles to Second Life popularity is the fact that people must install specific software to visit the site. One of the promises of a 3D technology called WebGL is that such worlds could be drawn directly in a browser. Now a company called Katalabs, formed by a number of Stanford researchers, has done just that with a virtual world project called KataSpace. KataSpace uses the Web technologies to create a user interface for the open-source Sirikata platform for multiuser 3D world, Katalabs said in a blog post. The demonstration world is workable but primitive, with only two avatars to pick from, some jerky movement, and terrain that avatars walk through rather than over. 3D on the Web is a competitive area , with WebGL support being built into Firefox, Chrome, Safari, and Opera--the four browsers that all trail Microsoft's Internet Explorer in usage. "The Chrome experiments team is building a section specifically for WebGL," said Henry Bridge, a Google Chrome product manager.