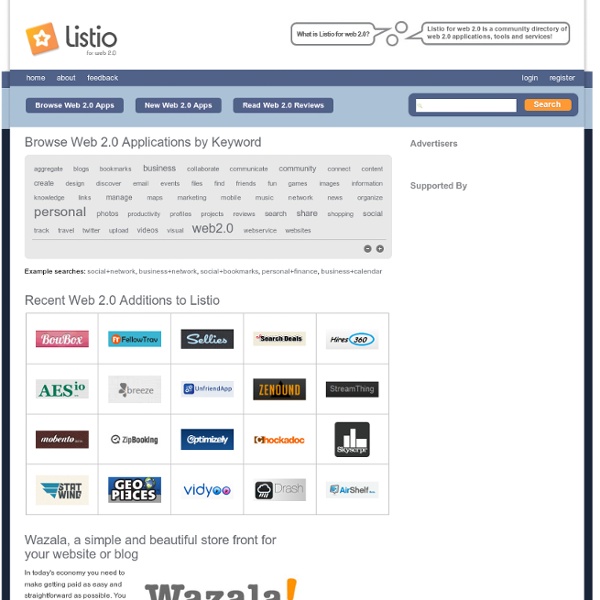 There are currently a number of email apps for iPhone users to choose form. Some are specific to a certain platform while others will work with multiple email accounts. Some are free and some will cost you. Here is a review for three of the top email apps for iPhone getting some cool buzz lately. Mailbox Mailbox is a free email app that is currently only available to Gmail users but the developers claim that the app will be available for other platforms soon. The focus of the app is to make email quicker and easier to manage.

The Best Online Virtual “Corkboards” (or “Bulletin Boards”) NOTE: First, Wallwisher, the popular virtual “corkboard” or “bulletin board” Web tool changed their name — they’re now known as Padlet (though all their old links using the Wallwisher name work fine). Now, Corkboard.Me, a similar tool, just announced they’re changing their name, too — they are now known as NoteApp. Wallwisher was the first online application that let you easily place virtual post-it notes on a virtual corkboard or bulletin board, and allow you to post text, images, and/or videos on them. This kinds of apps have many uses.

Broadband Speed Test - Internet Speed Diagnostics, Benchmarks, Voip Diagnostics, Internet Bandwidth Forums - ISPgeeks.com Broadband Speed Test, Broadband Benchmark, Bandwidth Test, Internet Speed Test, Connection Test, it doesn't matter what we call them, it's the end result and how you get there that matters. Whether you use Cable, DSL, ADSL, FiOS, T1 or Satellite as your delivery method, it's important to know the bandwidth, capacity, quality and operational status of your connection and it's just as important to get this information from a reliable source. Your results data is only as good as the provider of the results.

What Is Web 2.0 by Tim O'Reilly 09/30/2005 Oct. 2009: Tim O'Reilly and John Battelle answer the question of "What's next for Web 2.0?" in Web Squared: Web 2.0 Five Years On. The bursting of the dot-com bubble in the fall of 2001 marked a turning point for the web. Many people concluded that the web was overhyped, when in fact bubbles and consequent shakeouts appear to be a common feature of all technological revolutions.

How to Repair a Faulty Windows Installation Without Reformatting Corrupted system files don't have to ruin your day Nothing will put a crimp in your computing style quite like a Windows error. Although Microsoft's OS has gotten exponentially more stable over the years, it's still very possible for Windows system files to become corrupt, which can cause your system to slow down, freeze, or (in the worst case) refuse to load your operating system at all. When you encounter a Windows error, your first instinct may be to back up your data, grab the ol' installation disk, and weep silently as you press the Reformat button. 10 eLearning Freebies Sharebar Everyone loves freebies and I enjoy sharing and using them. Here are ten that you might find valuable from comic book art to specialized fonts and templates to an mLearning job aid. 1.

Web 2 Map: The Data Layer – Visualizing the Big Players in the Internet Economy As I wrote last month, I’m working with a team of folks to redesign the Web 2 Points of Control map along the lines of this year’s theme: “The Data Frame.” In the past few weeks I’ve been talking to scores of interesting people, including CEOs of data-driven start ups (TrialPay and Corda, for example), academics in the public dataspace, policy folks, and VCs. Along the way I’ve solidified my thinking about how best to visualize the “data layer” we’ll be adding to the map, and I wanted to bounce it off all of you. So here, in my best narrative voice, is what I’m thinking. First, of course, some data.

Best of the web: 19 sites you shouldn't be without Groundbreaking websites are all around us, and if you believed every company that positioned itself as the latest, greatest thing, you'd have an awful lot of bookmarks in your browser. Sites come and sites go, but it's rare that one makes enough of an impact on your life to revolutionise how you use the internet. But occasionally sites come along that offer a genuinely new way of finding, storing or curating stuff on the web. We've put together a list of 20 websites we think could let you use the internet in a way you haven't done before, save you time, make you money and let you enjoy yourself in the process.

21 Brilliant Productivity Tools Every College Student Must Use If you ask a college student about productivity, he won't have much to say. And you really can't blame him. He leads a dynamic life where academics and fun go hand in hand, with the latter becoming a more important activity most of the times. However, with the advent of internet and web 2.0, a college student now has access to so many amazing tools that he could finish up his work as well as enjoy life to the fullest without the guilt. Rapid turnover in the Web 2.0 space – the best get acquired A review of what had happened to the Web 2.0 poster-children prompted me to review what had happened to the companies featured in my Web 2.0 Landscape dating from May 2007. This was one of the elements of our Web 2.0 Framework which has now been downloaded over 150,000 times. In the diagram below the green circles indicate the companies have been acquired, while a red cross shows the company has joined the dead-pool.

The Best Teacher Resources For “Foldables” “Foldables” are basically 3 D graphic organizers. Graphic organizers are great tools to help English Language Learners (and all students) categorize content in a way to make it more accessible to them (you might also want to check-out Not “The Best,” But “A List” Of Mindmapping, Flow Chart Tools, & Graphic Organizers). I’ve found them particularly helpful in Social Studies classes, but they’re useful in all subjects. ”One-dimensional” graphic organizers are equally useful. Foldables, though, generally provide space for more content and are also good for a change-of-pace.