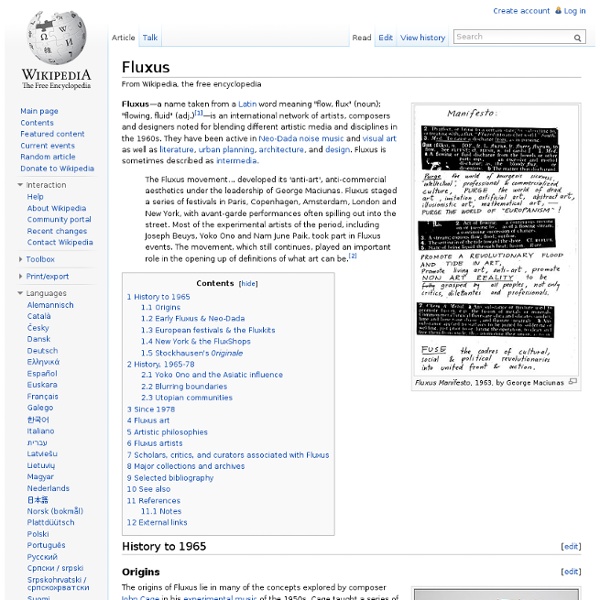 Fluxus—a name taken from a Latin word meaning "flow, flux" (noun); "flowing, fluid" (adj.)[1]—is an international network of artists, composers and designers noted for blending different artistic media and disciplines in the 1960s. They have been active in Neo-Dada noise music and visual art as well as literature, urban planning, architecture, and design. Fluxus is sometimes described as intermedia. The Fluxus movement... developed its 'anti-art', anti-commercial aesthetics under the leadership of George Maciunas. History to 1965[edit] Origins[edit] Flux Year Box 2, c.1967, a Flux box edited and produced by George Maciunas, containing works by many early Fluxus artists. The origins of Fluxus lie in many of the concepts explored by composer John Cage in his experimental music of the 1950s. Fluxus started with the work, and then came together, applying the name Fluxus to work which already existed. Early Fluxus and Neo-Dada[edit] European festivals and the Fluxkits[edit] History, 1965-78[edit]

Daniel Spoerri Daniel Spoerri with snare-picture. Early life[edit] Spoerri was born Daniel Isaac Feinstein, on 27 March 1930, in Galați, Romania. Although his father, Isaac Feinstein, had converted to Christianity, after Romania entered the War on the side of Nazi Germany he was arrested and killed in 1941. His mother, born Lydia Spoerri, was Swiss and was therefore able to emigrate with her family of 6 children to Switzerland in 1942. In the 1950s he was active in dance, studying classical dance with Olga Preobrajenska and in 1954 becoming the lead dancer at the State Opera of Bern, Switzerland. Editions MAT[edit] In 1959 Spoerri founded Editions MAT ("Multiplication d'art Transformable"), a venture which produced and sold copies of three-dimensional constructed artworks by artists such as Marcel Duchamp, Dieter Roth, Jean Tinguely and Victor Vasarely. Snare-Pictures (Tableau Pièges)[edit] In 1960, Spoerri made his first "snare-picture". An Anecdoted Topography of Chance[edit] New Realism[edit]

UbuWeb Fluxus Movement, Artists and Major Works | The Art Story "In Fluxus there has never been any attempt to agree on aims or methods; individuals with something unnamable in common have simply naturally coalesced to publish and perform their work. Perhaps this common thing is a feeling that the bounds of art are much wider than they have conventionally seemed, or that art and certain long established bounds are no longer very useful." Synopsis Fluxus was a loosely organized group of artists that spanned the globe, but had an especially strong presence in New York City. George Maciunas is historically considered the primary founder and organizer of the movement, who described Fluxus as, "a fusion of Spike Jones, gags, games, Vaudeville, Cage and Duchamp." Key Ideas Unlike previous artistic movements, Fluxus sought to change the history of the world, not just the history of art. Fluxus art involved the viewer, relying on the element of chance to shape the ultimate outcome of the piece. Most Important Art Beginnings Concepts and Styles Fluxus and Zen

Google Yves Klein Yves Klein (French: [iv klɛ̃]; 28 April 1928 – 6 June 1962) was a French artist considered an important figure in post-war European art. He is the leading member of the French artistic movement of Nouveau réalisme founded in 1960 by art critic Pierre Restany. Klein was a pioneer in the development of Performance art, and is seen as an inspiration to and as a forerunner of Minimal art, as well as Pop art. Biography[edit] Klein was born in Nice, in the Alpes-Maritimes department of France. From 1942 to 1946, Yves Klein studied at the École Nationale de la Marine Marchande and the École Nationale des Langues Orientales and began practicing judo. With this famous symbolic gesture of signing the sky, Klein had foreseen, as in a reverie, the thrust of his art from that time onwards—a quest to reach the far side of the infinite.[1] Artwork[edit] Monochrome works: The Blue Epoch[edit] Yves Klein, IKB 191, 1962. The Void[edit] Anthropométries[edit] Aero works[edit] Multiples[edit] Last years[edit]