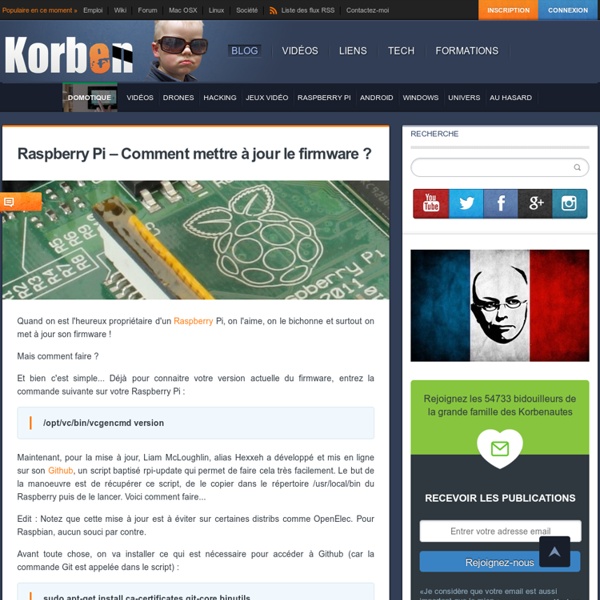 Note names, MIDI numbers and frequencies Note names, MIDI numbers and frequencies are related here in tables and via an application that converts them. The musical interval between two notes depends on the ratio of their frequencies. See Frequency and Pitch for more details and an introduction to frequency and pitch. An octave is a ratio of 2:1 and, in equal temperament, an octave comprises 12 equal semitones. Each semitone therefore has a ratio of 21/12 (approximately 1.059).

Installing Raspbian on the Raspberry Pi & using SSH and VNC to remotely connect to the Raspberry Pi UPDATED: July 18th 2013 This blog entry will describe: The installation of the Raspbian Wheezy Linux Distribution on an SD card.Powering up the Raspberry Pi (RPi) board and connecting it to the networkRemotely Accessing the RPi board via SSHInitial Configuration of the Rasbpian OS/ RPi boardRemotely Accessing the RPi’s graphical desktop environment (LXDE) via VNC For starters you’ll need a microUSB terminated AC adapter, an Ethernet cable & an SD card. I highly recommend that you use a 4GB SD card as a minimum. Also this tutorial assumes that you are running a Debian or Ubuntu Based Linux operating system on your PC.

MagPi issue 25 – out now! For your weekend reading pleasure, here’s issue 25 of the MagPi! Published just yesterday, the latest issue of everyone’s favourite free, monthly, community-produced Raspberry Pi magazine is as full of fantastic stuff as ever. Click to read The MagPi! The cover story is one that’ll definitely get some attention in our house this weekend: it’s a full Python simulation of the Pocket Enigma Cipher Machine, a cleverly devised toy that demonstrates some of the principles of a real Enigma machine like the one many of you will recognise in the cover photo. Used by the German armed forces during World War II to encipher messages, these used rotating disks to achieve a sophisticated substitution cipher; the Pocket machine, and its Python simulation, use two disks to arrive at a fun, if not exactly unbreakable, cipher.

R-Pi NAS Back to RPi Guides. Raspberry Pi Network Attached Storage This project configures your Raspberry Pi to share files with any other computer on your local network. You can add a large hard disk to the RPi and use this to store your important files/photos/videos in a central location. The files on your RPi can be easily accessed from any type of computer which is connected to your network, for example a Windows PC, a Linux PC, A Mac, a smartphone, etc. In a classroom, each student can have access to a private area, and also a public area for sharing files. Spring 3 Dependency Injection via Constructor and Setter In this tutorial we are going to demonstrate the Spring Framework implementation of the Inversion of Control (IoC) principle, that is also known as Dependency Injection (DI). Dependency injection (DI) is a process whereby objects define their dependencies, that is, the other objects they work with, only through constructor arguments, arguments to a factory method, or properties that are set on the object instance after it is constructed or returned from a factory method. The container then injects those dependencies when it creates the bean. DI exists in two major variants, Constructor-based dependency injection and Setter-based dependency injection.